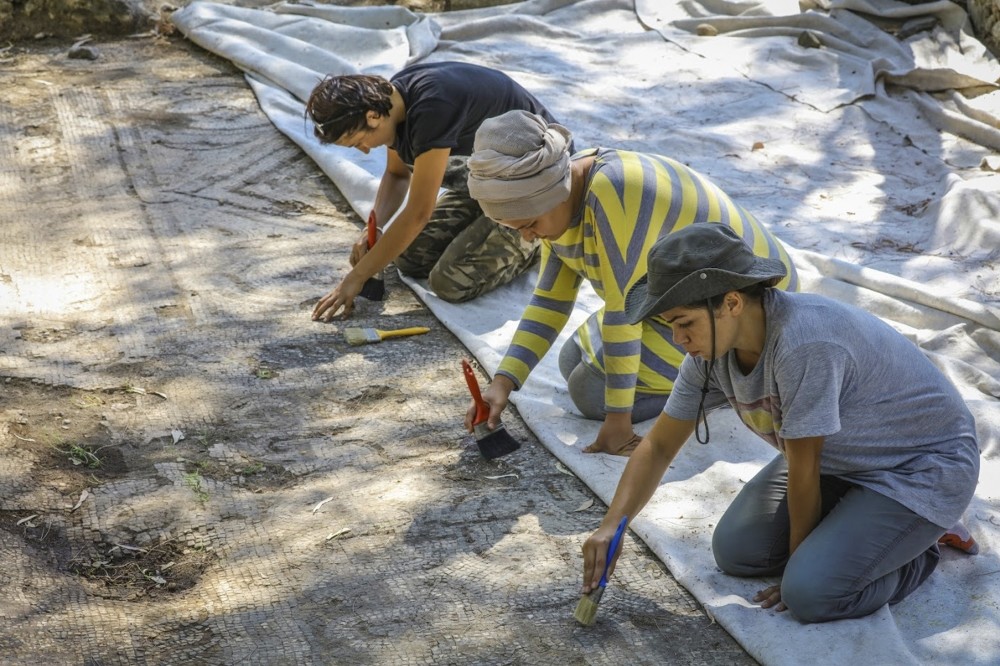 Archaeological findings were revealed in excavations of an ancient church, the site was used from the Hellenistic period until the Roman and Byzantine eras.
by Anadolu Agency Oct 11, 2017 12:00 am

First found in 1976 during excavations in the ancienty city of Idyros in Antalya, mosaics dating back to the fourth or fifth century have now been uncovered for a better understanding of the characteristics of the era as well as to protect historical treasures

1,600-year-old mosaics, which were first discovered in 1976 during excavations of the ancient city of Idyros in the Kemer district of Antalya province but were later covered back over, have been brought to light again.

Antalya Museum Director and the ancient city of Idyros excavation Project Manager Mustafa Demirel told Anadolu Agency (AA) that archaeological sites and ruins from the Hellenistic, Roman, Byzantine and Seljuk periods have been discovered in the Kemer district.

Demirel said that the ancient city of Idyros was established on Ayışığı Bay and is now surrounded by modern buildings, adding that according to archaeological findings revealed in excavations of an ancient church, the site was used from the Hellenistic period until the Roman and Byzantine eras. Demirel explained that the excavation of an ancient basilica at the site indicates that the site dates back to the fourth or fifth century. 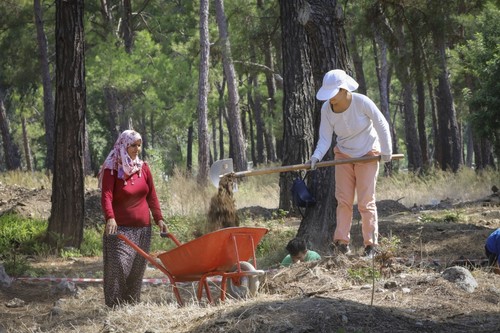 Speaking about the history of the archaeological excavations, Demirel said that some ancient ruins and mosaics were unearthed during excavations that were carried out in 1976 by the Antalya Museum, but said that work at the site had to be stopped and resumed later.

Demirel said that excavations started again in the region under the instructions of Antalya Governor Münir Karaloğlu, who visited the town, as well as permission granted by the Culture and Tourism Ministry. He stressed that the work is carried out assistant professor Murat Karademir as the scientific advisor and the participation of students from Konya's Selçuk University.

He said that excavations are mainly conducted in and around the church, which is thought to have been located at the center of the ancient city, adding that they are trying to get a better understanding of the layout of the complex.

Saying that the parts of the site which were covered with mosaics during the period include the base slabs of the site where religious ceremonies were held during ancient times, also known as the "central naves," as well as the left and right sides of the basilica churches. Demirel explained that during excavations, the tradition of mosaics from the period was understood more clearly.

"We usually see mosaics from the late period here, which feature geometric and floral patterns. Specifically, we have discovered an inscription featuring the names of people who donated money for the construction of the building, which we discovered at the west entrance. Since the structure was protected at the foundational level, we do not see much monumental architecture left. It is a significant structure that reflects the characteristics of the period. The names of the people who donated money to the construction or made other contributions are written in inscriptions, as sponsoring figures," Demirel added.

Explaining that the ruins of the ancient Byzantine walls, a three-door structure and a wall were discovered during the excavation works, Demirel said that the floor of the church was covered with mosaics made of orange, red, white and gray stones. He also said that many oil lamps and coins from the late-Roman period were also discovered in the excavation.