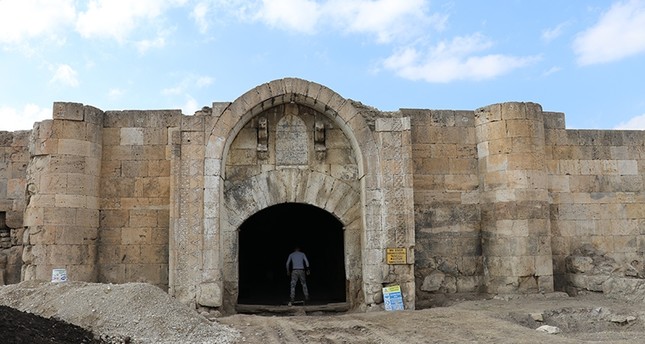 787-year-old Han Abad Caravanserai located in Turkey's Denizli province will soon be opened to tourism after a series of restoration works by the General Directorate for Foundations.

Also referred to as Çardak Han, the Han Abad Caravanserai was constructed during the reign of local Seljuk ruler Esedüddin Ayaz in 1230 in western Denizli province's Çardak district. It is the largest of its kind in the Aegean region.

The restoration works started in September and will continue for two years to bring back the glory of the legendary structure.

Professor Mustafa Beyazıt from Pamukkale University's Faculty of Arts told Anadolu Agency that Esedüddin Ayaz was the first provincial head of the Seljuks in Denizli.

He noted that the caravanserai is the oldest Turkish-Islamic structure which survived centuries and is the first of its kind with an 800-year-old land registry certificate.

Seljuk-era caravanserais had courtyards, as well as barns and shelters, indicating the Seljuk Empire's high regard about trade, Beyazıt said, adding that the people living around the caravanserai were exempt from taxes in return for assistance in management of the facilities.

The structure was also used as a caravanserai during the Ottoman period and was used as a granary during the Turkish War of Independence.

Çardak Mayor Mahmut Öztürk noted that the caravanserai marks the first traces of Seljuks in Western Anatolia, and added that he has spent great effort for the restoration of the historical landmark.

"The caravanserai will regain its splendid look and will be open to tourism" Öztürk said.

Consisting of six sections and five naves, the Çardak Han was built during the reign of Seljuk Sultan Alaeddin Keykubad I. It features unique Seljuk figures and decorations and has a square courtyard unique to Seljuk caravanserais.

Share on Facebook Share on Twitter
Previous in History A historical building known as Taş Mektep (Stone School) in Bursa's... Next in History Thought to belong to Ottoman battleships, which probably sank during...
DAILY SABAH RECOMMENDS