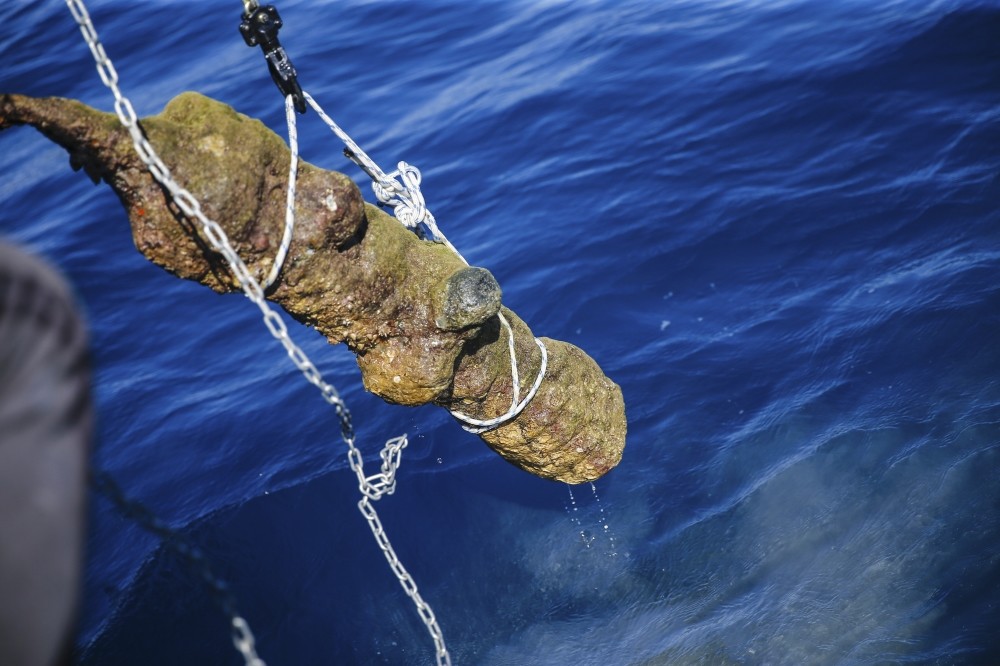 At world-renowned Konyaaltı Beach located in the southern province of Antalya, a group of underwater archaeologists brought up eight sunken cannons that remained from the Ottoman period from the depths of the Mediterranean.

As a result of the work conducted with the Selçuk-1 Scientific Research Ship, eight

cannons of different sizes that were produced during the Ottoman period were brought to the surface with lift bags. They were subsequently placed on a ship with a crane and transferred to the Antalya Museum.

Antalya Museum Director Mustafa Demirel, who closely followed the work, said in a statement he issued that a number of galleons,

and anchors from sunken battleships from the Ottoman period were previously found along the coastal strip that extends to Antalya's Alanya district and Mersin province.

Demirel said that people repeatedly informed the museum about the

cannons located closer to shore or the sea surface as if they were newly discovered.

"The surface research was completed last year. We discussed the

people informed us of in a meeting on the subject, after which we realized that they were cultural properties discovered and identified in previous years. The museum received many written and verbal notices as if the properties were newly discovered. We organized this program with the authorization of the Culture and Tourism Ministry in order to prevent damaging and smuggling of these properties," Demirel said.

Demirel also added that they will maintain their cooperation with Selçuk University with regard to underwater cultural heritage.

Cannons are from at least three shipwrecksDr. Hakan Öniz, the director of Selçuk University's Underwater Research and Application Center, said they acted with the motivation to preserve the , which posed risks under the sea, as part of the cultural heritage.

Öniz also said the artifacts probably belong to at least three sunken ships. "For a month, we have been studying the

remaining from the Ottoman battleships, which probably sank during a storm around 300 years ago. The ruins are known to be under the sea for around 20 to 25 years and appear in the records of the Antalya Museum. The have been on the agenda over the last couple of years. Most of them were produced by the Ottomans, which are quite heavy and have different sizes between 400 kilograms [882 pounds] to over 1,000 tons," Öniz said.

Öniz, who is also the head of Selçuk Univesity Underwater Archaeology Department, said they apply certain techniques to raise heavy objects from the depths.

due to oxidation, adding that the cultural properties were brought up from the water by strapping them to lift bags filled with air.

"The air [in the bags] brought the objects to the surface. We carried them on the sea surface until we reached the ship. Then the cranes of the ship took over the task. There are some special pools in the Antalya Museum. The objects are placed into these pools one by one by the experts. Our team, which has 10 people now, consists of underwater archeology master's students. We are conducting archaeological work in Mersin and Antalya with the authorization of the Culture and Tourism Ministry. Also, with the initiative of UNESCO, master's and doctoral students in the field from various countries can participate in our work during summers," Öniz said, also explaining that they pulled out the first made of bronze in the same region four years ago.

Reportedly, the Antalya Museum Directorate has begun work to clean and restore the .