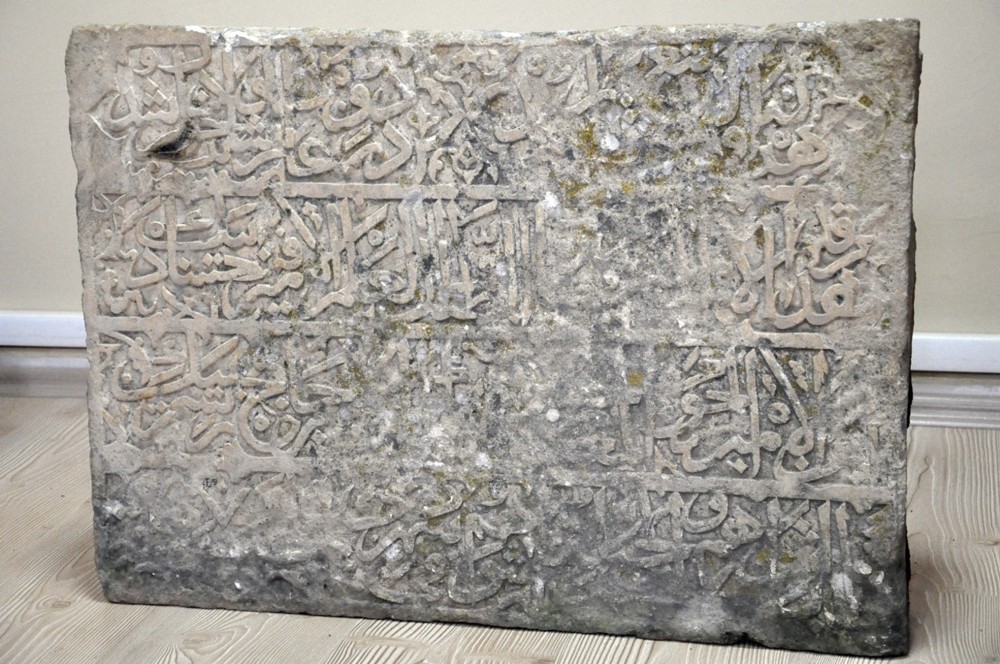 A historical epitaph that shows Anatolian-Islamic culture was lost for nearly 20 years was found by chance in Tunceli province and was immediately put under protection.

Tunceli Provincial Director of Culture and Tourism İsmet Hakan Ulaşoğlu had come to the Ferruh Şad Bey Tomb in the village of Ulukale during a visit years ago. When he heard that the epitaph of the tomb was lost, a search began in 2013. Ulaşoğlu said: "I chased the epitaph like a detective, but our work came to an end at a point since we couldn't find anything. We also cooperated with gendarmerie authorities, but we couldn't get any solution."

Explaining they found the epitaph by chance, he added: "An officer showed me a photo. I understood that it is the epitaph of the tomb when I saw it. We took it with us and brought it to our directorate with permission from the ministry. It will take its place in the museum that will be opened soon."

Explaining there were beyliks in what is now Tunceli, formerly known as Dersim, in the 1500s and Ferruh Şad was a "beg" in the region, the director spoke of the importance of the epitaph.

Archaeologist Kenan Öncel said that the work to establish the Dersim Public Museum and to find historical artifacts has been ongoing.

Explaining that the epitaph, which is a keepsake from the beyliks in Anatolia, was lost since 1997, Öncel said: "We found this epitaph by chance together with headstones that are 100 or 150 years old. When we analyzed them, we understood that this is the epitaph that we had been looking for. There was a circular letter sent by the Culture and Tourism Ministry to the 81 governorships and custom gates in 2014 to find it. The epitaph is an important piece since it reflects the first Turkish-Islamic culture in Anatolia."

Öncel said: "Islamic-style writing is on the epitaph along with rectangular patterns. A dome which belongs to Ferruh Şad Beg is mentioned in this writing. On the left corner, the year 1550, and 957 in the Islamic calendar is written. This piece has been destroyed by nature since it stayed outside for many years. Some letters are erased. Restorers from the ministry will come and work on it. We can get the required information after the work is complete."

The archaeologist added that an official writing has been sent from the ministry so that the epitaph is exhibited at the museum that will open in Tunceli.