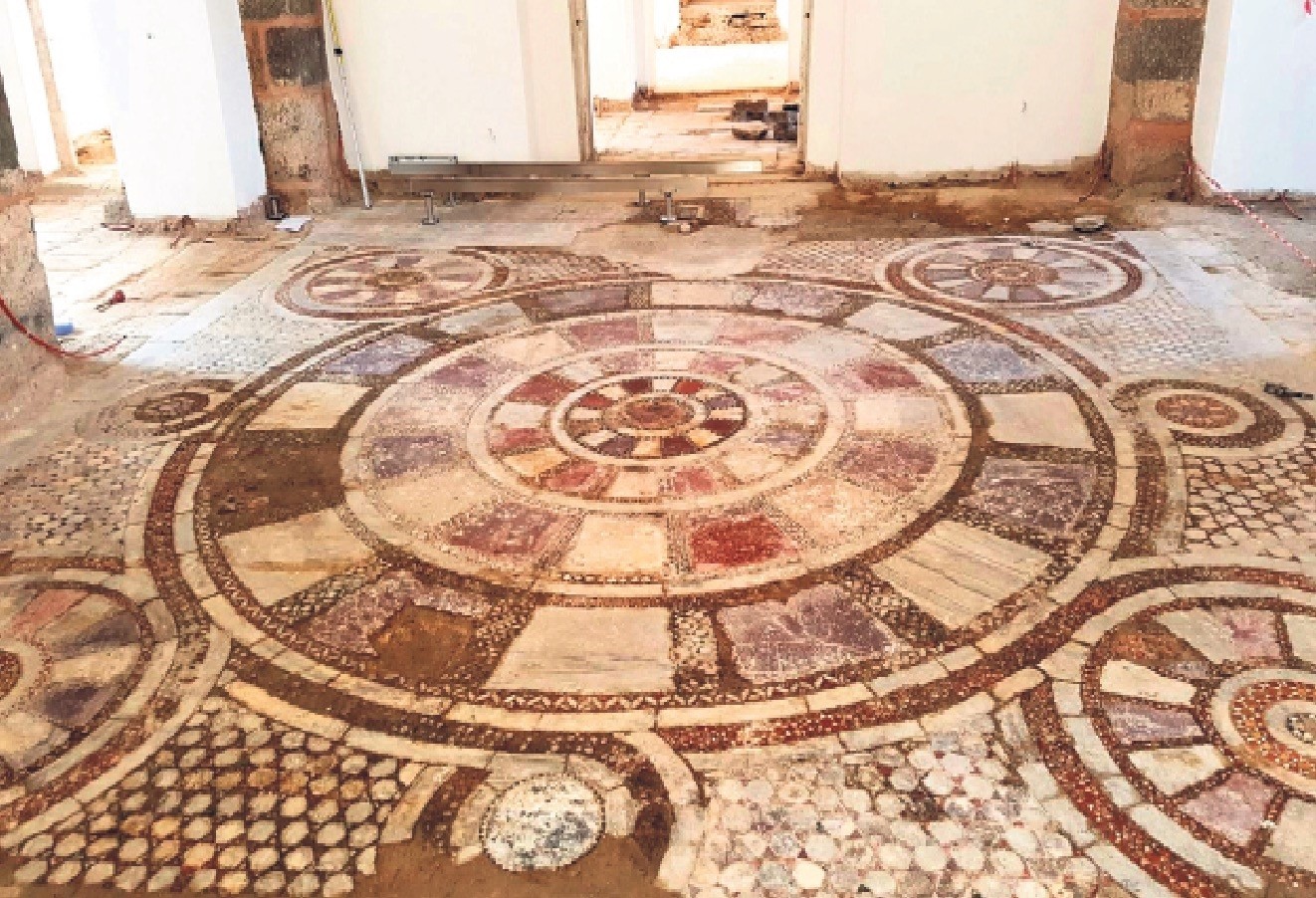 Newly discovered ancient mosaics on the floors of Fatih Mosque, one of the most important historical buildings in Trabzon province, are expected to bring an influx of local and foreign tourists

Workers have discovered 1,600-year-old mosaics on the floors of the historic Fatih Mosque in Trabzon. The building, one of the most important historical and religious constructions in Trabzon, was converted from a church into a mosque after Mehmed the Conqueror captured the Black Sea province.

As more plaster is removed from the building, the more historical works are being discovered in the mosque, which was constructed with face stone.

Authorities announced that it will be opened to visitors although restoration work is ongoing. It was reported that the restoration works started by the Trabzon Regional Directorate for Foundations would be completed at the end of this year, and the mosque would be opened to tourism and worship.

History revealed as plaster falls off

The restoration works of the mosque, aimed to be finished last year, continued for one more year because of the windows that were found during plaster removal. The mosaics on the floor, which were cleaned by archaeologists, are found in an area which is more than 100 square meters. It was evaluated that one of the works was in a good state and has been well preserved.

Trabzon Regional Director for Foundations Orhan Kahveci gave information about restoration works in the area, saying, "The Fatih Mosque is a very important construction for us. It was turned into a museum from a church as a right of conquest after Mehmed the Conqueror captured Trabzon. It was such an important church that the coronations of the kings were held there in the ancient times."

"History specialists of these ancient times and Turkish history specialists worked together to restore the building. The arrangements have been done since the construction is thought to be a contributor to the city's tourism," he added.

'We came across surprises'

Saying that they came across some surprises during the restoration, Kahveci continued, "When the works lagged behind schedule, we had to change the contractor. The contract was extended since some windows were found in the previous months. We were planning to complete them until the end of this year. We did some works to reveal the stone structure of the external walls, removing the plaster. Some frescos were found."

"However, the most surprising thing for us was the mosaics found under the floor after it was removed. After this surprising event, we increased the budget, extending the restoration works," he said.

Glass to be upholstered on mosaics

Noting that the mosaics will be preserved with glass, he added, "Staging with stainless steel construction were made and the upper face of the mosaics started to be covered by glass. It is fragile work."

"The mosaics date back to when the building was a church back in 370 A.D. We will protect them with a glass surface and exhibit them to visitors. We are talking about a 1,600-year-old history that was hidden there. After covering the mosaics with glass, the biggest part of the work will have been completed," he said.

Mosaics to be exhibited in their places

"It will be a nice visual place. We will also exhibit these works outside of prayer times. The glass floor will help us present the mosaics to tourists in specific days of the week. Our aim is to contribute to Trabzon's tourism. A budget of more than TL 2.5 million has been spent in the works continuing for nearly two years," the director said.

Kahveci explained that a visually beautiful place is emerging with restoration coming to an end, saying, "We are bringing the second Hagia Sophia to tourists coming to Trabzon with these works. It is sure that this will be a great building with a beautiful image. These mosaics will increase the value of this place."

"We are planning to complete all the restoration works and open the mosque until next Ramadan," he said. "The mosaics will be presented to the interest of local and foreign tourists. We are trying to show the archaic, historical, provincial identity of Trabzon."

About the Fatih Mosque

The Fatih Mosque is a mosque in the Ortahisar district of Trabzon province, Turkey. It was originally built in Byzantine times as the Panagia Chrysokephalos Church. It served as a church and monastery until the conquest of Trabzon in 1461. It is assumed that the church was constructed over the ruins of an ancient Roman temple by Hanmibalianos, the nephew of Roman Emperor Constantin (325 - 364 A.D.).