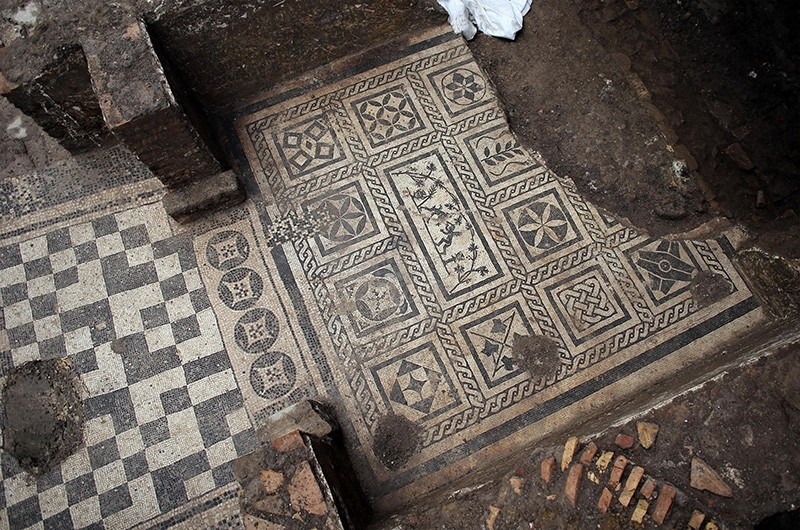 An undated handout photo made available by the Rome Cultural Superintendence press office on March 2, 2018, shows a detail view of an ancient Roman 'Commander's House', uncovered under a new Roma subway station in Rome, Italy. (EPA Photo)
by Mar 02, 2018 12:00 am

The ruins of the second-century AD "commander's house" were found during work on the centrally-located Amba Aradam-Ipponio station for the Metro C, where archeologists two years ago had also made the "sensational" discovery of 1,800-year-old army barracks.

"We think this is where the barracks' commander used to live and relax after work," the head of Rome's monuments authority, Francesco Prosperetti, told reporters while standing in the 300-square-meter house, some 12 meters below street level.

The entire structure - featuring rich mosaics and wall decorations, as well as 14 rooms, including a bathhouse with underfloor heating - will be dismantled to allow for boring work on underground tunnels.

Once the tunnels are complete, the findings will be put back "where they were, as they were," to create "what will surely become the most beautiful metro station in the world," Prosperetti said.

Rome authorities had also used the "most beautiful" designation for the San Giovanni station when they presented it to media last year.

Archeological findings are common in Rome and have been blamed for delays to the Metro C - notorious as the world's most expensive underground project, plagued by funding shortages and legal rows between contractors and Rome's municipality.