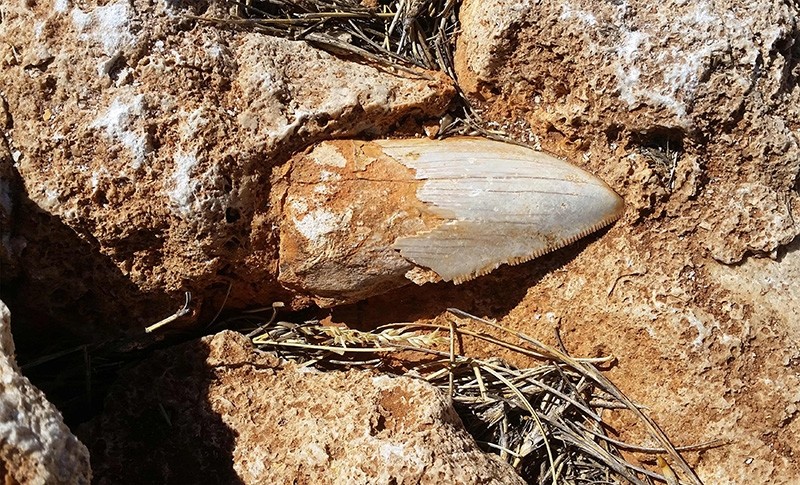 This undated hand out picture released by the Department of Biodiversity, Conservation and Attractions on March 12, 2018 shows a giant fossilised tooth from a prehistoric shark in the Cape Range National Park, Western Australia (AFP Photo)
by French Press Agency - AFP Mar 13, 2018 12:00 am

A giant fossilized tooth from a prehistoric shark has gone missing from a supposedly secret location at a remote Australian World Heritage site, and wildlife officials want it back.

The well-preserved tooth, which could be valuable to collectors, is an estimated 2-2.5 million years old and belonged to a Megalodon, regarded as one of the largest and most powerful fish to have ever lived.

"It had quite defined features on it, so you could see the serrated edge of the shark's tooth, it was probably one of the better specimens we knew of," said Arvid Hogstrom from Parks and Wildlife in Western Australia.

One of just a few Megalodon specimens in the Ningaloo Coast World Heritage Area, "very few people" knew of its location, he added, without elaborating on exactly how many.

"It is not something someone would have stumbled across and they have been required to put a bit of effort in to get it out of the rock as well," he said.

"We presume... an amateur collector (has taken it) or someone that just wants to have a fossil sitting on their mantelpiece."

Hogstrom said that his team had been working on protecting the fossil, which is some 10 centimeters long (3.93 inches), by concealing it with rocks while considering a range of options for its longer-term perseveration.

"But unfortunately someone has beaten us to it," he said.

"It is in such a remote location and we just don't check the site every day, we are not exactly sure when it disappeared but we got a report on Friday."

Megalodon, which can grow up to 15 meters long, are believed to have become extinct 1.6 million years ago.