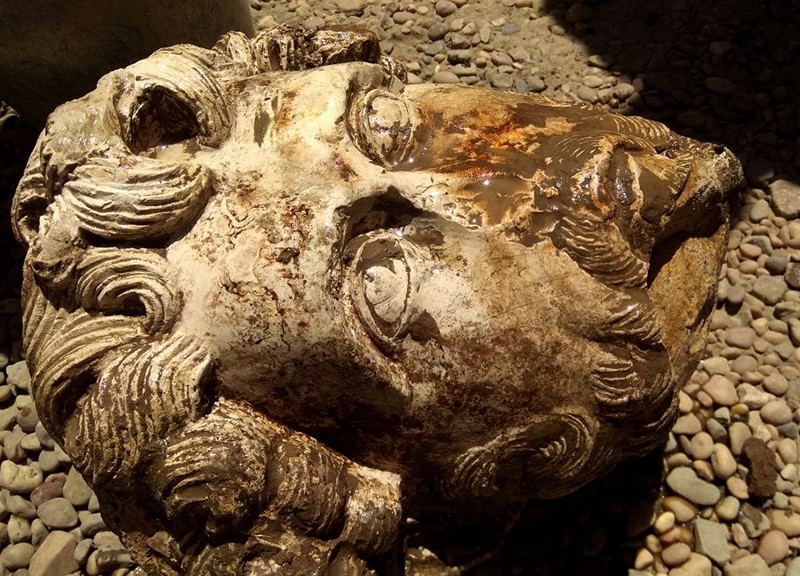 This undated photo released by the Egyptian Ministry of Antiquities, shows the head of Roman Emperor Marcus Aurelius that was found in the Temple of Kom Ombo, in Aswan, 585 miles (940 kilometers) south of Cairo, Egypt. (AP Photo)
by Daily Sabah with DPA Apr 22, 2018 12:00 am

Egyptian archaeologists have discovered an ancient shrine and a bust of the Roman Emperor Marcus Aurelius in southern Egypt, officials said Sunday.

The shrine of god Osiris-Ptah Neb, dating back to the 25th dynasty, was found in the Temples of Karnak in the southern city of Luxor.

The shrine is important because of its location, according to Ayman Ashmawy, head of the government's Ancient Egyptian Antiquities department.

The shrine is located to the south of the Temple of Amun-Re, whereas previous shrines had been found only to the east and north of the temple, in line with ancient Egyptian beliefs, he said in a statement.

Artifacts found at the site included a collection of pottery, the lower part of a sitting statue and part of a stone panel depicting an offering table filled with a ram and a goose.

These were symbols of the ancient god Amun, according to Essam Nagy, the head of the expedition working in the area.

The bust of Roman Emperor Marcus Aurelius was, meanwhile, found in the Temple of Kom Ombo in the southern city of Aswan.

The head is "unique" because statues depicting this emperor are rare in Egypt, Ashmawy said.

The finds are the latest in a series announced in Egypt in recent months.

Egypt is seeking to revive its tourism industry, a main source of national income, after it was hard hit by the unrest that followed the 2011 uprising against Egypt's longtime dictator Hosni Mubarak.