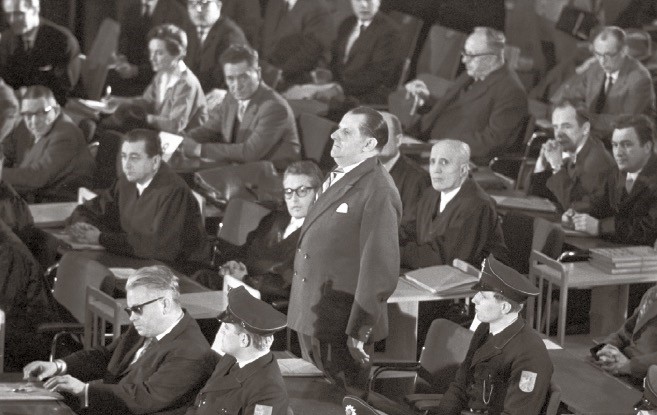 Defendants with their lawyers and policemen during the first Auschwitz trial at the plenary hall of the city council in Frankfurt am Main in 1963.
by May 18, 2018 12:00 am

Documents from the post-war Auschwitz trial have been classed as part of the UNESCO "Memory of the World Register," underlining their significance as "common heritage of humanity," Germany's foreign minister said Wednesday.

The 1963-1965 trials of 22 Nazi officials who ran the Auschwitz death camp marked a turning point when Germans faced up to their role in the Holocaust.

Unlike the better known 1945-1946 Nuremberg trials where judges from the Allied powers presided over the hearings of top Nazis, the Frankfurt trial was the first in which Germans prosecuted Germans.

In 183 days of hearings, the trial "paved the way for an entire society to take a critical look in the mirror at the role of Germans as citizens, participants, followers and criminals," said Foreign Minister Heiko Maas.

Classifying the court material from the Auschwitz trial in an international register is an "insurance against forgetting," said Hesse science and arts minister Boris Rhein, in remarks carried by national news agency dpa.

The documents are "an important element in the fight against ongoing denial and relativizing of Nazi violations," added Maas.

The material classed in the international register includes 454 volumes of files stored at the Hesse State Archives.

They contain 430 hours of recordings of the testimonies of 319 witnesses - including 181 survivors of the Auschwitz-Birkenau camp and 80 members of the camp staff, the SS, and the police - on 103 tapes, according to the UNESCO website.

He fought against a conspiracy of silence on the Holocaust at a time when many Nazis still occupied prominent roles in the justice service.

Bauer in 1957 handed to Israel's Mossad secret service information that led to the arrest of fugitive top Nazi Adolf Eichmann, who was later convicted and hanged in Israel.

Some 1.1 million people, most of them European Jews, perished between 1940 and 1945 in the Auschwitz-Birkenau camp before it was liberated by Soviet forces.