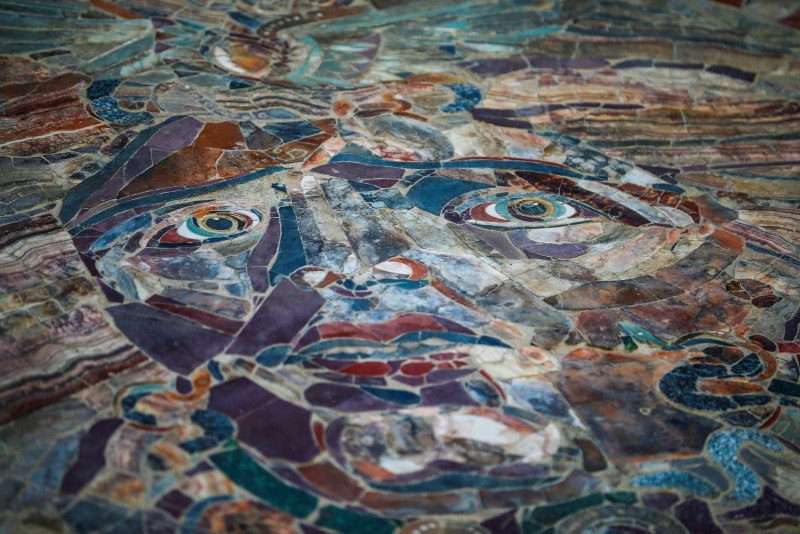 A 2000-year-old mosaic of the snake-haired Greek mythological monster Medusa has officially been opened to visitors in Turkey's southwestern province of Burdur.

Located around 100 kilometers out of Burdur city center, the Medusa mosaic is at the heart of the Odeon, an ancient concert hall, in the ancient city of Kibyra.

In an interview with Anadolu Agency, Mehmet Akif Ersoy University (MAKÜ) Archeology Department instructor Şükrü Özüdoğru said that the mosaic was discovered during excavations on the Odeon which took place between 2009 and 2012.

"With this structure showing up, Kibyra became famous because structures like odeons are usually located in bigger ancient cities such as Efes, Miletus or Athens," said Özüdoğru, adding that he believes the Kibyra Odeon to be the largest ancient structure covered by a roof in Turkey.

Sitting in the middle of the Odeon, the Medusa mosaic attracts visitors with its unique thin marble plaques, which is one of a kind according to Özüdoğru.

"This mosaic is one of a kind in terms of its building technique. There is nothing similar to it, not in Italy, nor in Greece, not even in ancient Mesopotamia."

The Medusa mosaic which is estimated to have been built around 1st century A.D. is 95 percent original with only five percent of it reconstructed.

The Odeon itself which has a capacity of 3,600 people is believed to have served as a court, a theater and a parliament.

The Odeon, which has been covered up by restorers for 10 months in order to protect the ancient structure from adverse weather conditions, is only opened to visitors for two months every year.

In Greek mythology, Medusa was a female monster with a disfigured face and venomous snakes on her head in place of hair. According to legends, Medusa's gaze would turn anyone into stone and she was beheaded by Perseus who managed to sneak next to her, hiding behind a reflective shield gifted from the Goddess of Wisdom Athena.