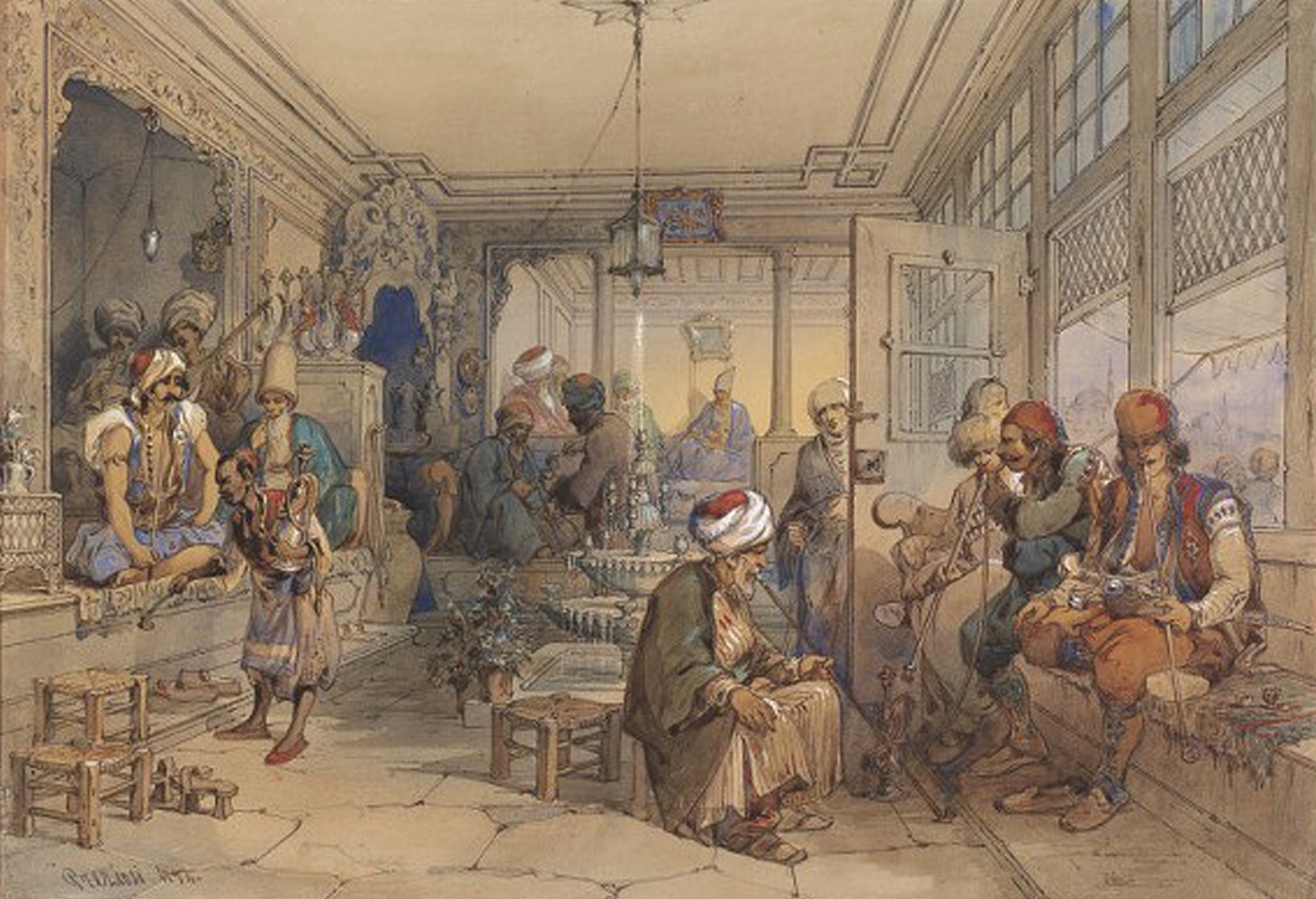 The popularity of coffee as a beverage in the Ottoman lands goes back to the 1550's thanks to the rise in coffeehouses. It is said that the first coffee shop was opened by two Yemenis in Istanbul in the reign of Suleiman the Magnificent, who was a great lover of coffee. From that time to the end of the 19th century when tea was introduced, coffee was the most beloved beverage across the empire. It is reported that at the end of the 16th century there were approximately 600 coffeehouses in the empire's capital Istanbul and almost 2500 by the end of the 19th century. These numbers show us the popularity of the drink.

The emergence of coffeehouses led to them playing a role as social meeting place. Hence when there would be any inkling of unrest, the first thing the Ottoman rulers would do was to close these shops to stop people from talking to each other. 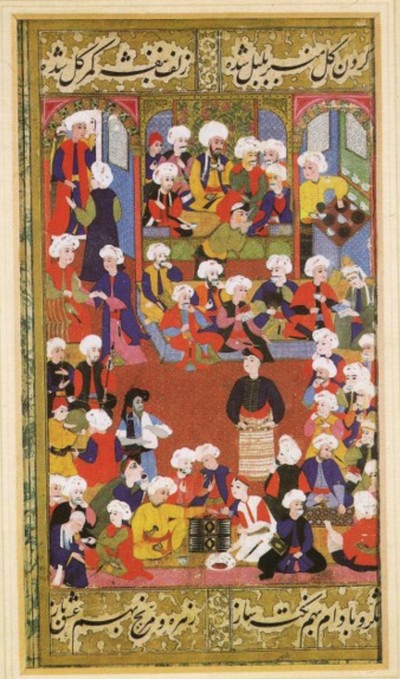 A miniature displays the part of a coffeehouse in the second half of the 16th century.

Coffeehouses were often based around the customers' social status and reflected a part of Ottoman society's daily life. There were several type of coffee houses that existed, some of which we will look at here.

There were numerous shops in Istanbul: from blacksmiths to glass cutters, butchers to jewelers. If we think of the population of Istanbul then it will be easier to grasp the need for such types of socializing places. By the 17th century, one million people had settled in Istanbul. We can only guess how many sellers and craftsmen were there. These coffeehouses were located in areas close to the Fatih, Beyazıt and Sirkeci districts, since the heart of trade beat there. Shopkeepers, craftsmen, porters, carters, boatmen and such, used these coffeehouses as places to take a rest, where they may have talked about wars and politics, while also gossiping about city's events like some drunkard's scandal to Spanish newcomers.

Minstrels were mostly found in rural areas, but Istanbul's glamour also attracted them. We can compare them today to street singers. In general these minstrels, mostly in pairs, would show up at the same time. One by one they would sing their songs and insult their opponent. The goal was to sing the most attractive and influential lyrics and silence the opponent. On occasion, there would be musicians on stage who created live music shows. People would gather around them and watch the performances while drinking their coffee.

Janissaries were the backbone of the Ottoman army. They were professional soldiers whose income came from wars. Until the beginning of the 18th century they were able to make money from wars, but their income started to slow down due to the empire's deteriorating situation, both politically and militarily. Thus, Janissaries who remained in Istanbul tried to make money in different ways. Some of them opened coffeehouses. The number and prevalence of these was so considerable that today we can mention them as a separate category. Until the first quarter of the 19th century when the Janissary corps were abolished by Mahmud the Second they maintained their presence on every corner of Istanbul.

Very similar to minstrel coffeehouses, there were also storytellers' coffeehouses. They performed parodies and mimicked subjects chosen from the vivid life of Istanbul. Audiences came to coffeehouses to watch very funny and "informative" performances. We say informative because the shows would include gossip about the royal family or high-level officials.

By the second half of the 19th century, a new type of customer began to visit the coffeehouses. These people were intellectuals, who were literate and concerned the empire's current situation. The intellectuals may have discussed articles in the newspaper, or took the time to give information on international affairs to ordinary people, or perhaps just read their books or magazines. Because they changed the atmosphere of coffee shops, they are classed into their own version of coffee shops. Until the 1970s this type of coffeehouse maintained its presence as a remnant of the old empire.