Largest dinosaur foot ever found in Wyoming, US paleontologists claim 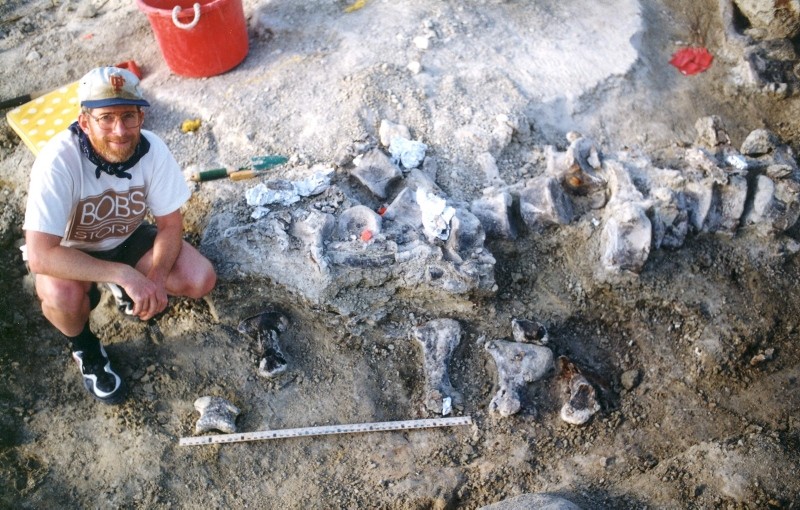 This 1998 image courtesy of the University of Kansas Division of Vertebrate Paleontology archives shows a University of Kansas expedition crew member next to the brachiosaur foot bones (C) and a tail of a Camarasaurus (R). (AFP Photo)
by French Press Agency - AFP Jul 24, 2018 12:00 am

About 150 million years ago, a giant, long-necked dinosaur stomped on the ground in the Western U.S. state of Wyoming and left behind what researchers said Tuesday is the largest dinosaur foot ever discovered.

The foot bones, found beneath a series of tail bones, extend about three feet (one meter) wide and are believed to belong to a brachiosaur, from a group of extinct herbivores known as sauropods, said the findings in the journal PeerJ.

This is an "exceptionally large foot, bigger than the elements of all other known sauropod foot bones," lead author Anthony Maltese, of the Rocky Mountain Dinosaur Resource Center in Woodland Park, Colorado, told AFP in an email.

"I get asked often what's the biggest/longest/whatever superlative dinosaur that ever existed, and in this case I can actually provide an answer now," he said.

To give a sense of the creature's immense size, its thigh bone alone measured nearly 6.8 feet (2.07 meters).

That said, the Wyoming brachiosaur is not the largest dinosaur known to man -- other excavations have turned up fossils from animals that were likely larger -- but it is the biggest foot in evidence.

"There are tracks and other incomplete skeletons from Australia and Argentina that seem to be from even bigger animals, but those gigantic skeletons were found without the feet," said co-author Emanuel Tschopp, a postdoctoral fellow in the American Museum of Natural History's Division of Paleontology.

"This beast was clearly one of the biggest that ever walked in North America."

The discovery also extends the known northern range of brachiosaurs, showing they roamed a vast area from Utah to Wyoming, added Maltese.

"Brachiosaurs are pretty rare as far as dinosaurs go, and being able to really expand their geographical range by hundreds of kilometers is exciting and may well help us understand them much better," he said.

Maltese and colleagues at the University of Kansas first came upon the foot -- nicknamed "Bigfoot" -- in 1998, when he was an undergraduate student.

Then life, and work, got in the way.

"It became very difficult to find time to keep up on the literature in order to finish the project," he told AFP.

"Luckily by procrastination, it enabled me the opportunity to assemble an absolutely killer international research team and have the ability to 3D-scan all of the bones for the best data of any large dinosaur foot to date."

Other researchers on the project include Femke Holwerda, a PhD-degree candidate at the Ludwig Maximilians University of Munich, Germany, and David Burnham, a researcher at the University of Kansas.