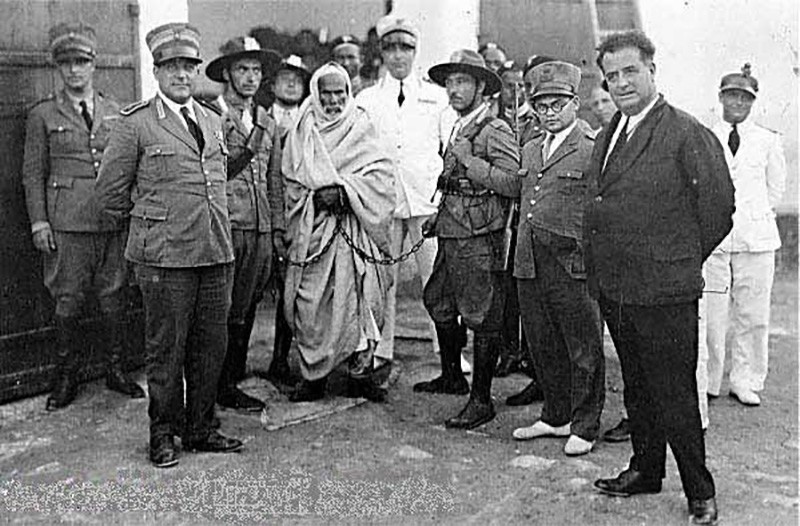 This file photo shows Omar Mukhtar being taken away after he was arrested by occupation powers.
by Daily Sabah with AA Sep 16, 2018 12:00 am

Libya's iconic resistance leader Omar Mukhtar (1862-1931), who spent the last 20 years of his life fighting the fascist Italian occupation of his country, will forever be remembered as the world-renowned "Desert Lion."

Mukhtar was killed 87 years ago — on Sept. 16, 2931 — by Italian occupiers, but he remains a symbol of resistance against impossible odds for successive generations of Libyan youth. 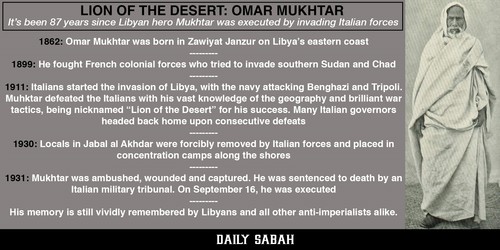 A member of the Al-Manfah, one of eastern Libya's most prominent tribes, Omar Mukhtar was born in 1862 in the village of Zawiyat Janzur on Libya's eastern coast.

His father died making the perilous journey to the holy city of Mecca in Saudi Arabia to perform the Hajj pilgrimage. According to his father's will, he was raised by Sheikh Hussein Ghariani, a religious scholar and friend of the family.

Mukhtar then traveled to eastern Libya's Al-Jaghbub Oasis, which at that time served as headquarters for the Senussian Dawa, an Islamic reformist movement founded by Sheikh Mohammed ibn Ali Senussi.

He stayed there for eight years, learning theology and Islamic science from Muslim scholars of the Senussian movement, including celebrated scholar Sheikh Al-Mahdi al-Senussi.

In 1897, al-Mahdi appointed him governor of Libya's eastern town of Zawiyat al-Qusour, where he became known for his wisdom, fairness and ability to resolve disputes.

During this period, Mukhtar became known as "Sidi Omar," or "Sir Omar" — a title granted only to the movement's greatest sheikhs and scholars.

Later, Mukhtar traveled to Sudan, where he served for several years as a deputy to Al-Mahdi al-Senussi.

Following the latter's death, Mukhtar was appointed — once again — as sheikh of Zawiyat al-Qusour in a move welcomed by the Ottoman Empire, which governed Libya at the time, due to his well-earned reputation for just leadership.

Mukhtar, however, eventually transformed from a religious scholar into a resistance fighter against British, French and — later — Italian colonial forces.

His armed struggle first began against British forces deployed along Egypt's border with Libya. He also fought French colonial forces who tried to invade southern Sudan and Chad in 1900.

During a war declared by Italy in 1911 against the Ottoman Empire, Mukhtar became known as the "Sheikh of the Mujahideen" after mobilizing 1,000 fighters from Zawiyat al-Qusour before joining the Ottoman army in eastern Benghazi.

In 1912, Rome declared Libya an Italian colony. For the next 20 years, Mukhtar led the Libyan resistance against the Italian occupiers, who suffered heavy losses as a result of his novel hit-and-run tactics.

Many of these clashes took place in and around Libya's northeastern city of Derna, including a two-day battle in 1913 that left 70 Italian soldiers dead and hundreds of others injured.

In 1930, Italian forces clashed with the mujahideen in a major battle after which they discovered Mukhtar's horse and trademark wire-rimmed glasses.

It was at this point that Italian Army Commander Marshal Rodolfo Graziani made his famous statement: "Today we took Mukhtar's glasses; tomorrow we will take his head."

On Sept. 11, 1931, during clashes with the Italian cavalry, two horses were killed from under Mukhtar, according Libyan eyewitnesses.

After one of his fighters addressed him as "Sidi Omar" in the heat of battle, he was quickly identified by Italian occupation forces, who finally managed to arrest him.

Three days later, on Sept. 14, Graziani arrived in Benghazi, where he hastily convened a "special tribunal" tasked with trying Mukhtar.

The following day, the resistance hero was sentenced to death by hanging.

During the "trial," when the Italians offered to let him leave the country if he called on his mujahideen to abandon their armed struggle, Mukhtar uttered his most famous words:

"My forefinger, which attests at each prayer that there is no God but Allah and that Muhammad is the Messenger of Allah, cannot write a single word of falsehood. We will not surrender; we will be victorious or we will die!"

He read the Shahada — the first pillar of Islam and a testimony of faith — in the presence of 20,000 people who had gathered to witness the great leader's death.

Mukhtar's remarkable life — at least its final phase — was depicted in the 1980 film "Lion of the Desert" starring Anthony Quinn. In a testament to the lingering political sensitivities that the figure of Mukhtar still evokes, the film remained banned in Italy until 2009.