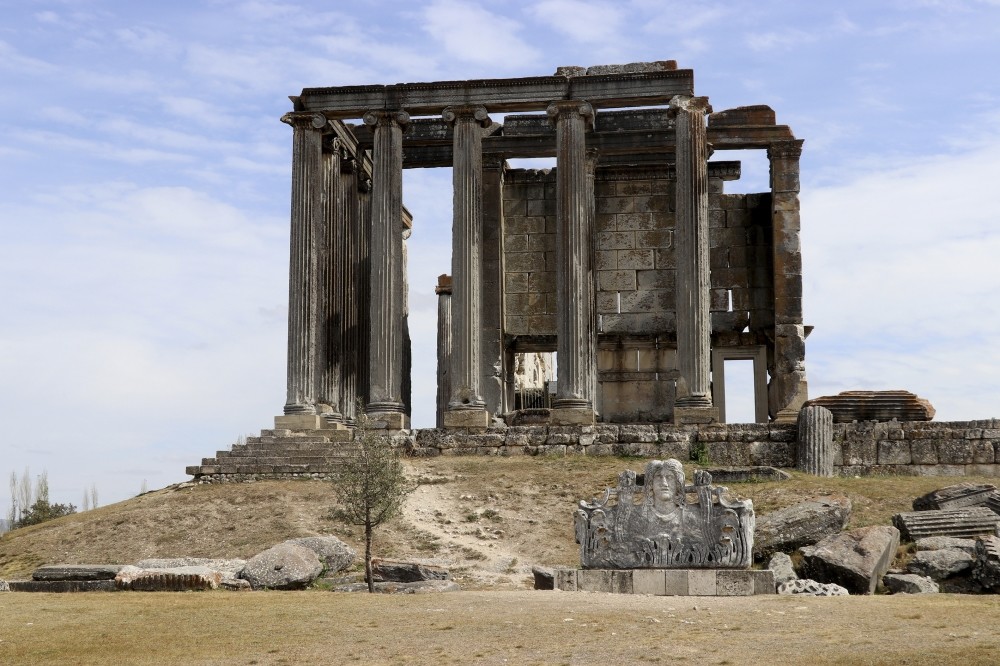 The Temple of Zeus in the ancient city of Aizanoi is located in Ku00fctahya provinceu2019s u00c7avdarhisar district.
by Anadolu Agency Oct 02, 2018 12:00 am

In a remarkable discovery, some 400 figure drawings belonging to Çavdar Turks were found in the Temple of Zeus in the ancient city of Aizanoi, which is often described as the ‘Second Ephesus'

Studies carried out about the Çavdar Turks in the ancient city of Aizanoi, described as the "Second Ephesus," in Kütahya province's Çavdarhisar district will be collected in a book soon.

Excavations began in 1926 in the ancient city, which was included on the UNESCO World Heritage Tentative List in 2012. Many buildings were unearthed including the best preserved Temple of Zeus in Anatolia, an ancient 15,000-person theater, a 13,500-person stadium, two baths, the world's first trade stock exchange building, a columned street, five bridges, two agoras, necropolises and waterways.

Professor Dr. Elif Özer, the head of excavations at Aizanoi, told Anadolu Agency (AA) that they unearthed the belongings of Çavdar Turks and Byzantines in the Temple of Zeus.

The excavations and field research are being conducted under Pamukkale University's Archeology Department and with the sponsorship of Halk Investment.

Özer said that their findings revealed that the Çavdar tribe and Byzantines lived in Aizanoi after the ancient Roman period.

"In the southern part of the temple, we worked on the earlier life in the ancient city going back to 12th and 13th centuries. We have found evidence showing that the Çavdar Turks lived here in that period. The art historians of our team worked on the Çavdar figures drawn on the temple. There are nearly 400 figures at the temple. All of these figures were examined one by one and drawings and inventory of each were made. We have found that there were five or six different groups here," she said.

"For instance, there were warriors and their leaders. These figures were drawn in larger size with larger horses. There are figures that were made smaller and probably depicted the enemy. There are figures of cavalry and hunters. Inside of the temple, there are usually figures about revelry. Here we see komuz players and minstrels," she added.

Özer noted that a book about the Çavdar Turks in the temple will be published very soon.

Özer stated that the findings indicate that the Byzantine people also lived in the ancient city in the recent period.

"The Temple of Zeus was used as a church by the Byzantines during the monotheistic period. Therefore, crosses were engraved on all of the walls. We found hundreds of crosses engraved with nails or sharp objects. We saw that a lily prayer was written for Mary, who is considered to be the mother of Jesus, when the temple was a church," she said.

Özer expressed that the altar made for Zeus at the temple entrance during the ancient Roman period was turned into a furnace in the Byzantine period and bread was cooked in it.

"In the entrance on the eastern side of the temple, there is an altar for Zeus belonging to the ancient Roman period. We found that this altar was turned into a furnace during the earlier age of antiquity. Here, we found a bread seal belonging to the Byzantine period. This shows that the seals with the sign of the cross were printed on the dough and given to the people of that period," she concluded