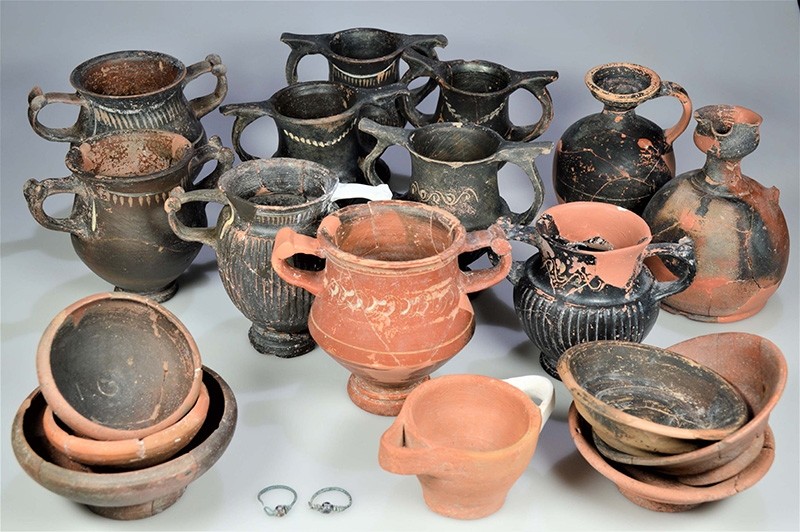 Urn-like vases found in family grave in the ancient city of Assos in western Turkey. (AA Photo)
by Daily Sabah with AA Oct 08, 2018 12:00 am

A Turkish archeologist in northwestern Çanakkale province discovered a 2,300-year-old family grave containing the cremated ashes and remains of 21 individuals in the ancient city of Assos.

Speaking to Anadolu Agency, Nurettin Arslan, head of the Assos excavations and a professor at Çanakkale 18 Mart University, told Anadolu Agency the family grave dating back 2,300 years was discovered during excavations during the first half of 2018.

The grave, which was discovered in the region called Western Necropolis, had the surname "Aristios" written on its cover, Arslan said.

He noted that the grave belonged to a family of 21, and that the burial tools found in the area provided "important information on the rituals in Assos during the time of the Hellenistic Era."

Arslan further said one of the family members was buried normally, while the remaining 20 were cremated and their ashes were placed inside urn-like vases.

"Following the cremation, the remaining bones, ashes were placed inside urn-like square vases... In efforts to prevent any foreign substance getting inside the urns, the lids were sealed off with cement," he added.

Arslan underscored that the newly-discovered family grave provides "valuable information" on burial traditions, the chronology and typology of ceramics from the Hellenistic era.

He also pointed to the importance of a 2,300-year-old grave remaining undamaged to this day.

The ancient city of Assos, also known as Behramkale, is a popular destination for hundreds of thousands of tourists each year with its antique theater, agora, necropolis and walls. The local town of Ayvacık is also home to clean, quiet beaches that make it a relaxing summer getaway.