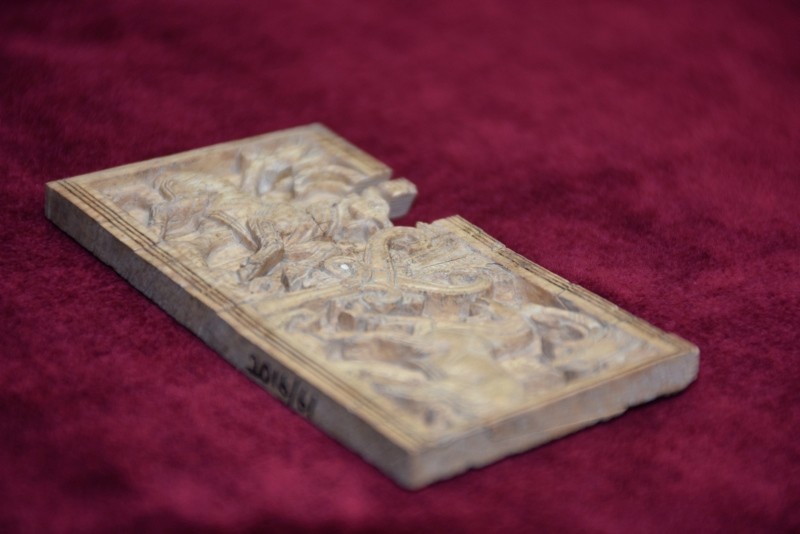 An ivory tablet dating back 3,200 years was found in eastern Turkey's Malatya province, giving clues on a potential link between Assyria and the region, the head of an excavation team said.

"The ivory tablet is a very important finding, as it was found for the first time here," the head of an excavation team and professor at the Sapienza University of Rome, Marcelle Frangipane, told Anadolu Agency.

Frangipane said scientific studies on the "unique artifact" -- found two years ago at the Archaeological Site of Arslantepe -- was completed.

"There are two goat figures and there is a plant, like a tree, between these figures. There are decorational motives around the tablet," she described, adding: "These motives were mostly used by Assyrians in Syria. The tablet may be coming from Assyria, or may have been made here."

Stating the carvings were very similar in style to those found in Iraq and Syria, she said: "It might be a decoration of furniture. It is a beautiful work of art and it is important for the history of the mound."

"It is the same with the motives in Syria, Iraq and Nemrut [in southeastern Adiyaman]; there may be a trade relation between them," Frangipane said, adding that they did not know the exact connection yet.

She said the finding was one of a kind, as it was the first piece found in the area that showed a link with the south (Assyria).

"These kinds of artifacts are found in Syria and Mesopotamia, but it is a unique piece for here," she noted.

The four-hectare and 30-meter high archaeological mound, lying 5 kilometers away from the city center, was accepted into the UNESCO Tentative List of World Heritage on April 15, 2014.

According to the UNESCO, Arslantepe's excavations have been conducted since 1961 on behalf of Turkish Culture and Tourism Ministry and the Italian Archaeological Expedition of the Sapienza University of Rome.

Arslantepe -- where findings from Late Chalcolithic Era in 5,000 B.C. and the Iron Age were found -- was home to many civilizations, such as Hittites, Romans and Byzantines.

During the past years' excavations, lion statues and an overturned king sculpture were unearthed, as well as the adobe palace, which has a drain rainwater infrastructure and more than 2,000 seals, which reveals the structure of the first city-state in the Anatolia.