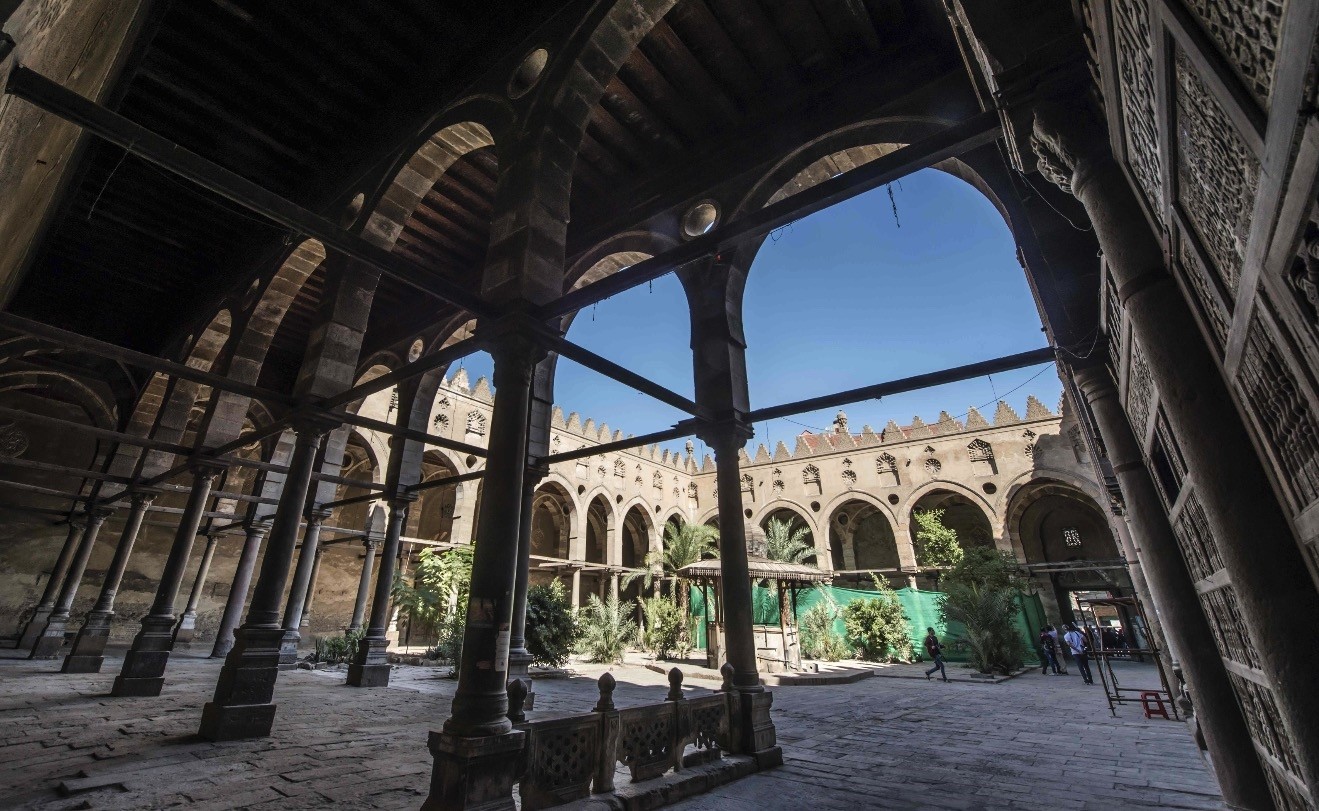 The 14th century Al-Maridani mosque at Al-Darb Al-Ahmar area in the capital Cairo undergoes renovation works.
by Nov 07, 2018 12:00 am

Halted by the popular protests that toppled Hosni Mubarak in 2011 and the ensuing political and economic turmoil which enveloped the country, restorative work on the Mamluk-era mosque picked back up last month.

On the other side of the quarter, similar work on the 14th century Al-Maridani mosque has just begun.

The capital's Islamic quarter, a UNESCO World Heritage Site since 1979 often referred to as historic Cairo, boasts some 600 listed monuments.

Islamic Cairo is packed with ornate monuments, mosques and mausoleums, and its narrow streets are punctuated with trinket shops, cafes and traditional old homes - an urban fabric layered in centuries of history.

For Luis Monreal, head of the Aga Khan Trust for Culture, refurbishing the area is a never-ending project.

"It's like painting an aircraft carrier: when you finish one side, you have to start over again on the other," he said.

Part of the Aga Khan Foundation, his outfit has been working on restoration projects in the area since the early 2000s.

In the immediate aftermath of Mubarak's 2011 fall, many of the area's squat traditional buildings were torn down and replaced with structures of six to eight floors.

And even if looting and illegal construction have since decreased, according to authorities, the historic heart of Egypt's teeming capital of 20 million is still choked with pollution.

UNESCO has warned several times in recent years of increasing degradation in historic Cairo, raising the alarm as it has for many other heritage cities across the globe. In 2017, its World Heritage Committee urged Egyptian authorities "to take all needed measures to halt the rapid deterioration" of sites across the quarter. In an October visit to monitor new restoration work, Antiquities Minister Khaled el-Enany highlighted budget issues as one of the central challenges facing the district.

The antiquities ministry is fed by revenues generated at Egypt's wealth of historic monuments.

And while tourism has picked up since it dropped in 2011, the 8.2 million people that visited Egypt in 2017 are still far behind the country's 14.7 million visitors in the year before the uprising.

With earnings from the sites down, much of the restoration work has been dependent on foreign funding. Kazakhstan is putting up 4.8 million euros ($5.5 million) to finance work on the Baybars mosque.

Meanwhile, the European Union is contributing 1.2 million euros for the Al-Maridani mosque, in tandem with the Aga Khan Foundation which has put forward 133,000 euros.

From his renovated home in historic Cairo, architect Alaa al-Habashi said time was of the essence in the push to preserve the area.

From his 16th-century home, known as Bayt Yakan, Habashi runs an art collective and organizes conferences around the "revitalization of the historic city."

The Aga Khan Foundation has designed a similar project, although on a much bigger scale, around the Al-Maridani mosque.

It includes the creation of a touristic route through the neighborhood and training for residents on accommodating tourists.

"This will generate economic activity, tourism... but the project also has a social dimension," said Ibrahim Laafia, head of cooperation with the EU's delegation to Egypt.