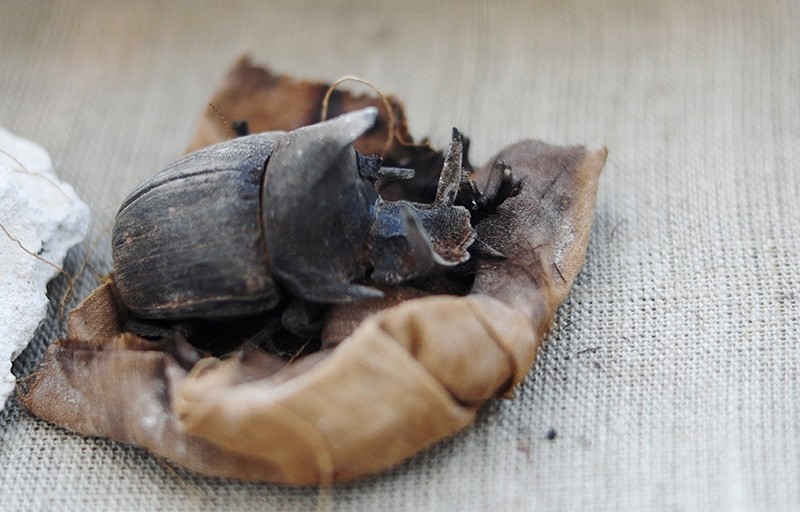 Archaeologists in Egypt said Saturday they had discovered a rare collection of mummified scarab beetles, as well as an apparently pristine Fifth Dynasty tomb that they plan to open in the coming weeks.

The mummified beetles were among artifacts found in seven tombs discovered over the past six months on the edge of the King Userkaf pyramid complex at the ancient necropolis of Saqqara, south of Cairo.

As they were preparing the site to present the latest discoveries, archaeologists found the door of another tomb that remains sealed, Mostafa Waziri, secretary-general of Egypt's Supreme Council of Antiquities, told reporters.

The tomb dates from the Fifth Dynasty of the Old Kingdom and is unusual because the facade and door are intact, meaning its contents may still be untouched, said Mohamed Youssef, director of the Saqqara area. He said experts plan to open the tomb in the coming weeks. 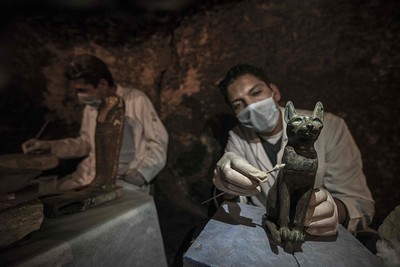 The tombs lie in a buried ridge that has only partially been uncovered and could offer many more similar discoveries, Waziri said. Excavations in the area had halted in 2013 before resuming earlier this year.

Saqqara served as the necropolis for Memphis, the capital of ancient Egypt for more than two millennia.

Two large scarabs wrapped in linen and in very good condition were found inside a limestone sarcophagus with a vaulted, decorated lid, the antiquities ministry said in a statement.

Another collection of scarab mummies was found inside a smaller sarcophagus.

"A couple of days ago, when we discovered those coffins, they were sealed coffins with drawings of scarabs. I never heard about them before."

Dozens of cat mummies and gilded statues of cats were unearthed, including a bronze statue dedicated to the cat goddess Bastet.