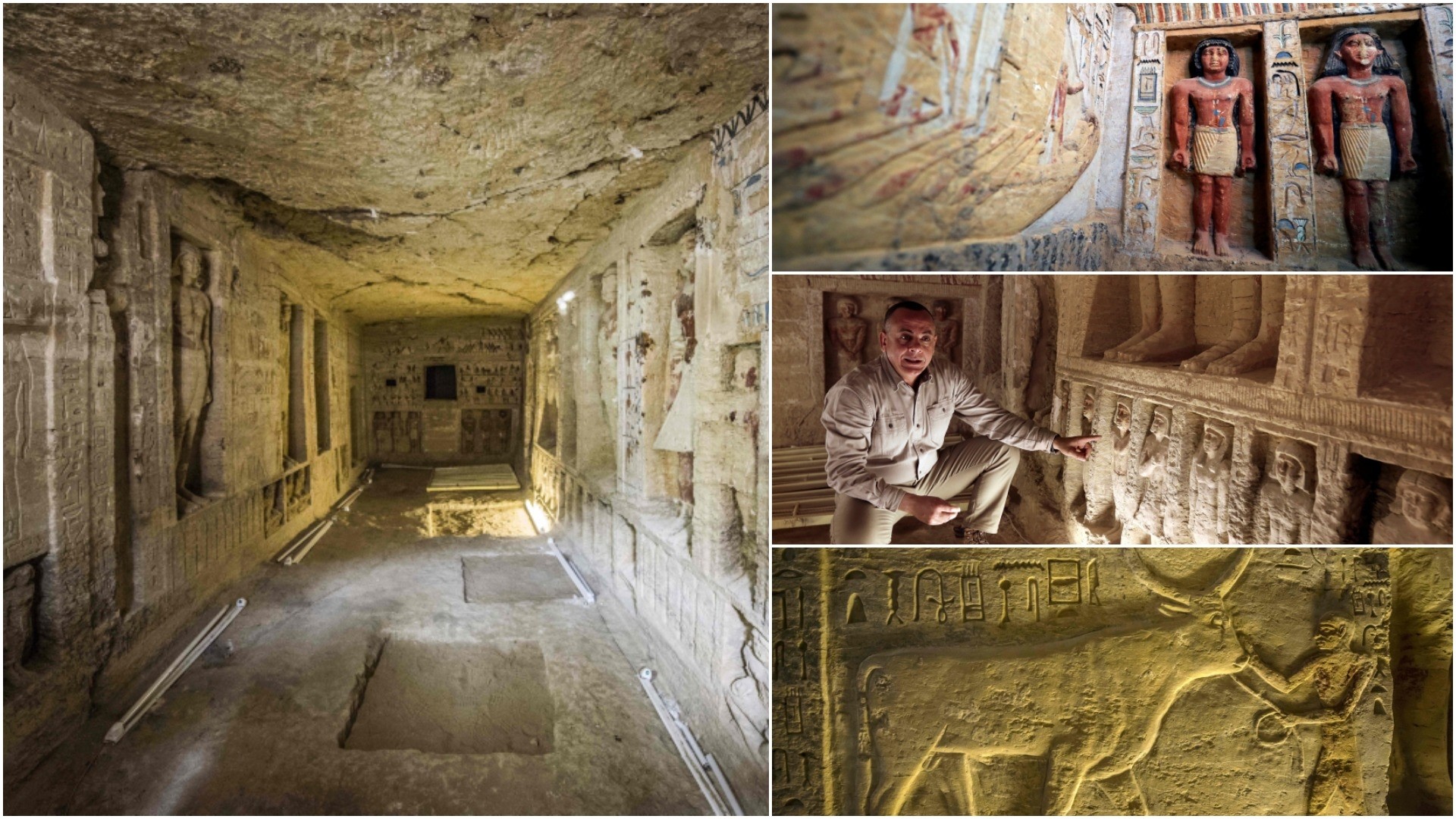 This picture taken on December 15, 2018 shows a general view of a newly-discovered tomb belonging to the high priest ,Wahtye, who served during the fifth dynasty reign of King Neferirkare. (AFP/REUTERS/AP Photos)
by Daily Sabah with Agencies Dec 15, 2018 12:00 am

A 4,400-year-old tomb belonging to the Pharaonic period and decorated with hieroglyphs and statues was unearthed in the western Egyptian city of Giza, Cairo-based MENA news agency reported Saturday.

The tomb was uncovered at the Sacred Animal Necropolis in Saqqara excavation site, Antiquities Minister Khalid al-Anani announced in a press conference held with the participation of foreign county ambassadors.

Al-Anani said that the "exceptionally well-preserved" tomb was from the rule of Neferirkare Kakai, the third king of the Fifth Dynasty of the Old Kingdom (circa 2,400 B.C.).

Saying that the tomb belonged to a person named "Wahtye", Al-Anani added that the person served as a purification priest for the Royal Palace, one of the greatest palaces of the Egyptians.

Al-Anani said that the discovered tomb was well-preserved and painted, with walls decorated with colorful scenes, showing royal priest "Wahtye" with his mother, wife and family as well as a number of sanctuaries with large colored statues of the priest and his family, Egyptian English-language monthly magazine Egypt Today reported.

Supreme Council of Antiquities Secretary General Mostafa Waziri said that the tomb — which archaeologists are still in the process of excavating — was roughly 10 meters in length and three meters in height. He described the find as "one of a kind in the last decades."

"We managed to remove the debris from the tomb's facade, a lintel on top of the tomb's door was revealed,'' Waziri was quoted by Egypt Today as saying.

The walls are decorated with hieroglyphs and statues of pharaohs. Waziri said the tomb was unique because of the statues and its near perfect condition.

"The color is almost intact even though the tomb is almost 4,400 years old," he said.

The Fifth Dynasty ruled Egypt from about 2,500 BC to 2,350 BC, not long after the great pyramid of Giza was built.

Saqqara served as the necropolis for Memphis, the capital of ancient Egypt for more than two millennia.

Excavations carried out by locals and foreigners in Egypt reveal thousands of years of historical artifacts each year.