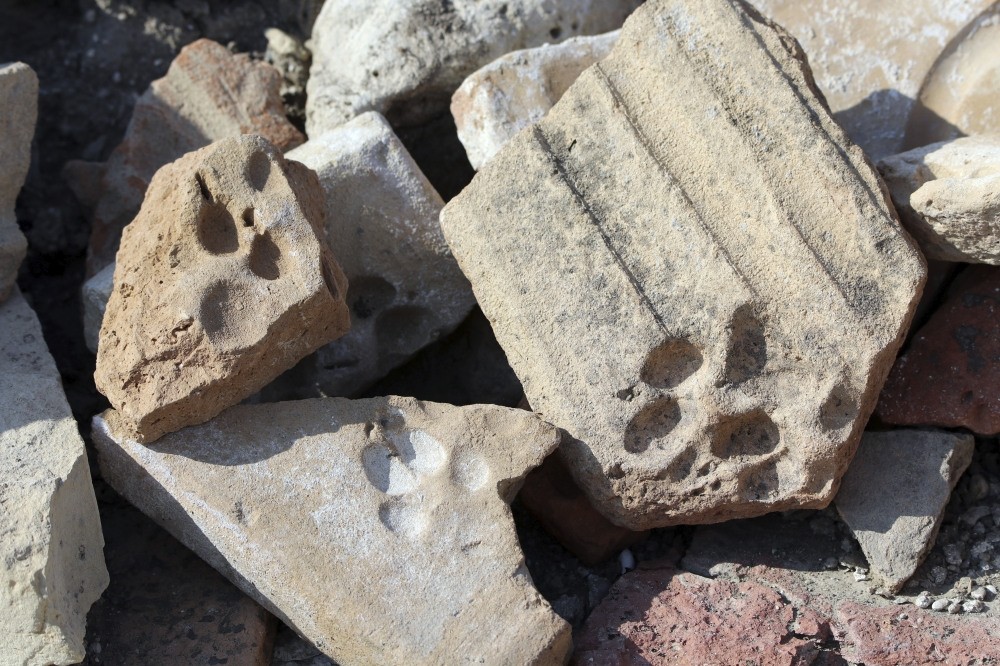 Cat and dog paw traces on brick and roof tiles that are nearly eight centuries old have been found at the Kadu0131kalesi archaeological site.
by Anadolu Agency Dec 26, 2018 12:00 am

Archeologists have discovered cat and dog paw traces on brick and roof tiles that are nearly eight centuries old at the Kadıkalesi archaeological site in Aydın's Kuşadası district.

Dating back to more some 5,000 years, Kadıkalesi was historically known as Anaia. It is 8 kilometers away from the city center. Archeologists have discovered numerous artifacts that shed light on the regions ancient social and commercial life.

The excavations were carried out under professor Zeynep Mercangöz, head of the Byzantine Art Department at Ege University.

Experts have discovered collections of ceramics, potteries and utensils at the site. By looking at the various forms, colors and rich motifs on the ceramics, it can be said that Kadıkalesi was a rich and qualified production center. In addition, archaeologists also found some interesting details about the regions social life.

Continuously inhabited since ancient times due to its strategic location, Kadıkalesi was also home to ancient bricks and roof tiles, dating back to as far as the 1200s. And some of them had cat and dog footprints.

Mercangöz told Anadolu Agency (AA) that the castle at the site, built during Byzantine period, was used as an acropolis. It also has a 5th-century church inside.

"Although the castle was seized by the Ottomans in 1413, it wasn't used until the First World War. The Ottomans also built a small mosque next to the church. We want to present all our findings at this ancient site, which is very important due to the neighboring mosque and the church, to the service of cultural tourism. The columns and blocks ruined in earthquakes in the previous centuries will be exhibited at their current spots for now," said Mercangöz.

Mercangöz was excited to see the paw traces on bricks and roof tiles. "All kinds of pottery and ceramics at the site are currently exhibited at a spot near the excavation site. On many bricks and roof tiles, we found so many paw traces. They possibly belong to animals that walked on the materials after the producer had left them to dry. All of the materials date back to the Medieval Ages. These are nearly 800 years old. Every single piece is exciting for us. These prove people of the time lived together with animals. Zooarchaeological research here has unearthed animal bones. This year we came across many dog skulls."

He also talked about the commercial relationship with Venice during the Byzantine period. "Kadıkale witnessed a brisk commercial life. They imported products from the Eastern Mediterranean and exported wine to Italy. The period experienced international commerce on a big scale. They must have taken the masters along with them before leaving Kadıkalesi as glass production was of high importance in the Middle Ages. Historians working on Byzantium say glasswork in Venice was initiated by Byzantine masters. Taking it a bit further, I would say, glass masters from Kadıkalesi opened the way for Italian glaziery."