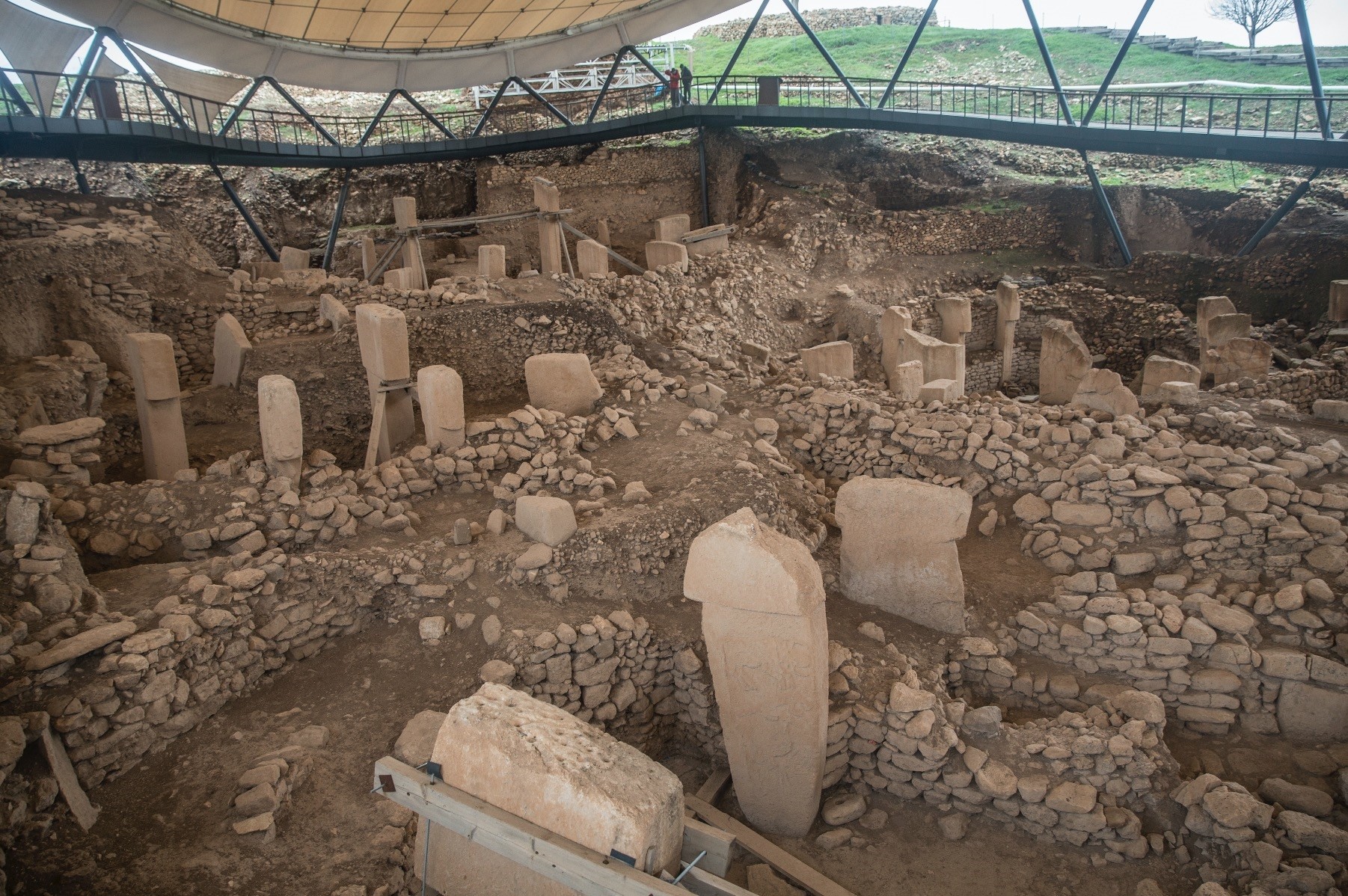 Located in the vicinity of the Örencik neighborhood, which is 18 kilometers away from the central Haliliye district of Şanlıurfa province, Göbeklitepe was first noticed by researchers from Istanbul and Chicago universities during surface studies in 1963. Göbeklitepe has a remarkable story to the summit.

According to Anadolu Agency (AA), the most concrete findings in the archaeological site, which was noticed by researchers from Istanbul and Chicago universities during surface surveys in 1963, emerged in 1986 when a farmer found a statue while ploughing his field.

Considering that the stone he found was valuable, the farmer acted responsibly and handed this statue to the Şanlıurfa Archaeology Museum. The sculpture, which was not understood at first, was taken under protection in the museum.

German professor Dr. Klaus Schmidt, who later came to the city to carry out excavations in Nevali Çori, Hilvan, and saw the findings in the museum, started a detailed study thinking that these sculptures were crucial.

With the permission from the Culture and Tourism Ministry's General Directorate of Cultural Heritage and Museums, the German Archaeology Institute and the Şanlıurfa Museum started excavation works in the site under the chairmanship of Schmidt in 1995. Excavations unearthed "T" shaped obelisks with wild animal figures of three to six meters in length and 40 to 60 tons in weight belonging to the Neolithic period.

The excavations also revealed various historical artifacts such as the oldest temple ruins in the world with 8 to 30-meter diameter circular and rectangular shapes, and a 65-centimeter-long human statue, dating to about 12,000 years ago.

Göbeklitepe, which is getting more recognizable in the world with every passing year, was included in the United Nations Educational, Scientific and Cultural Organization (UNESCO) Temporary List of World Heritage about six years ago and in the World Heritage List at the 42nd World Heritage Committee Meeting held in Bahrain in July this year.

The archaeological site, which is visited by a number of domestic and foreign tourists every year and is defined as the "zero point of history," is expected to attract even a greater number of visitors now that President Recep Tayyip Erdoğan has declared 2019 to be "The Year of Göbeklitepe."

Speaking to AA, Göbeklitepe Excavation Head and Şanlıurfa Museum Manager Celal Uludağ shared important details regarding the archaeological site from past to present.

Recalling that first studies on Göbeklitepe were conducted by experts from Istanbul and Chicago universities in 1963, Uludağ said, "However, some sculptures were found while a farmer named Şavvak Yıldız ploughing the field in the Örencik neighborhood. Yıldız brought these sculptures to the Şanlıurfa Archeology Museum, however, since there are no similar pieces at that time, what these sculptures were was not completely understood."

Oldest settlement in the world

Uludağ stated, "As a result of studies, architectural structures were unearthed. Excavations that started in 1995 continued under Klaus Schmidt's presidency until 2014. Upon the death of Schmidt, excavations continue under the presidency of the Şanlıurfa Archaeology Museum. As a result of excavations, findings that will change world history have emerged. It was found that the region was a cult worshiping center, which was revealed by hunter-gatherers dating back to the 9600 B.C. This was very important in terms of archaeological history since Göbeklitepe is the oldest one of the architectural structures found so far. The stelas found here are stylized human symbols. A story is told here. There is a very high level of sculpture here, and it was found to be a center of faith. People used to gather here and perform rituals in certain periods of the year. They used to commemorate their ancestors. They dedicated sacrifices to their ancestors and painted them on stones."

According to Uludağ, six temple structures have been unearthed during the ongoing excavations in Göbeklitepe, while the aerial photos previously taken revealed that there are actually 20 temples in the area.

Uludağ explained that their priority is to protect the unearthed temples and bring them into tourism, stating that they will unearth other temples in the upcoming period. He added, "Maybe Göbeklitepe will change history again. Before the discovery of Göbeklitepe, it was known that domestication of animals and agriculture was at the forefront in the transition to permanent settlement. However, this thesis was eliminated with the discovery of Göbeklitepe. In other words, it was proven that belief was in the forefront of the transition to permanent settlement; that people came together for their beliefs and that they switched to the settled life after the needs arose here."

Explaining that Göbeklitepe has been open to visitors for many years and the Ministry of Culture and Tourism has been continuing infrastructure works, Uludağ said, "During the UNESCO process, projects such as visitor reception center, social facilities, animation area, walkways and roofing were completed in Göbeklitepe. This was one of the important criteria of UNESCO. Göbeklitepe entered the UNESCO main list in July this year. This was very important for our country and Şanlıurfa. Archaeological excavations and promotional activities will continue from now on. It was also a pleasure for us that President Recep Tayyip Erdoğan declared 2019 as the year of Göbeklitepe. The potential here is very high. After the UNESCO process, the fact that 2019 is the year of Göbeklitepe will create great dynamism in tourism. The tourism intensity was good last year, but we expect this year to be very different. We are ready for this and waiting for visitors to come to Göbeklitepe."