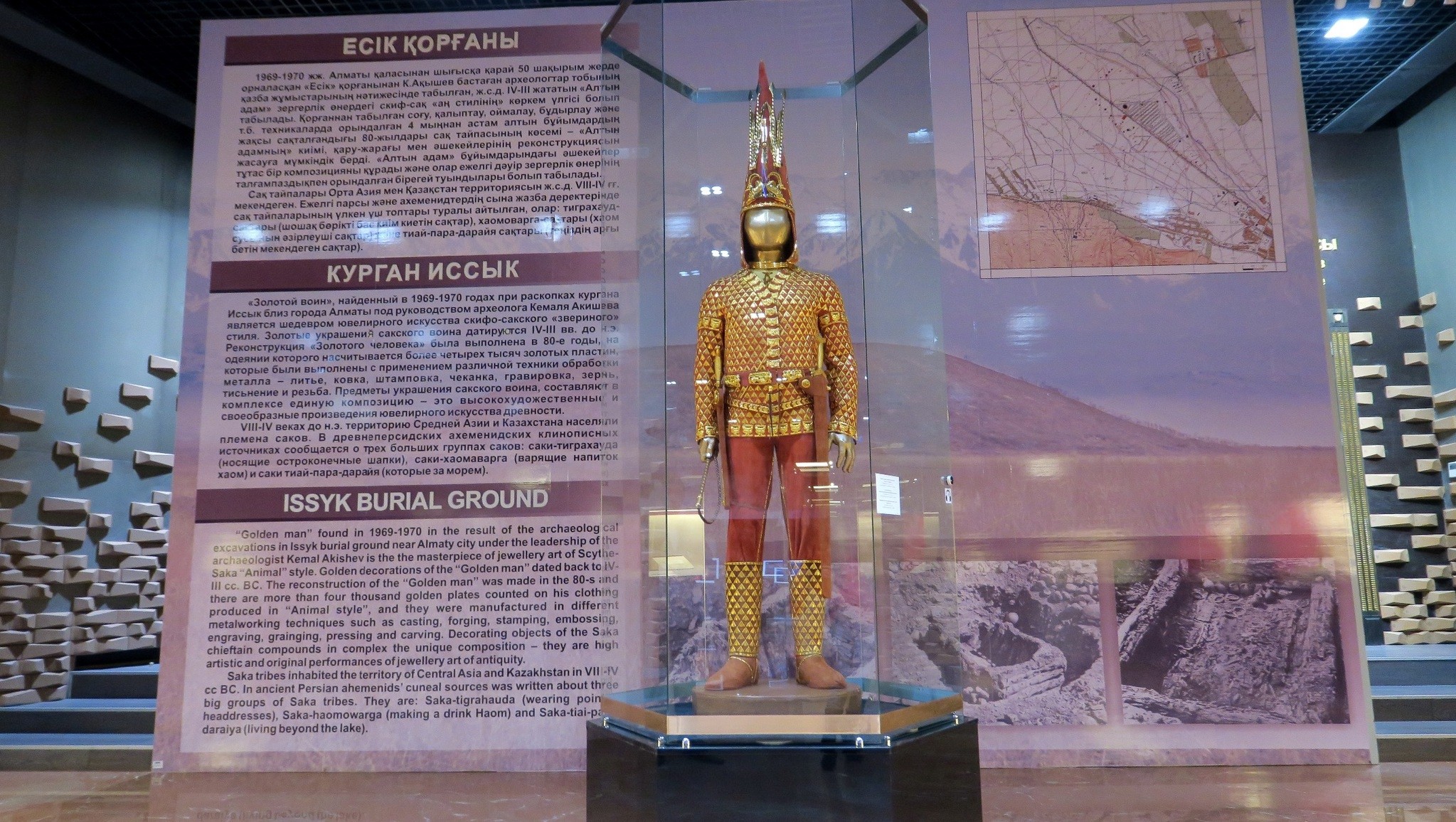 Covered with thousands of pieces of gold, the Golden Man's suit is composed of a shirt, boots and headgear and it is presumed that the golden earrings and rings from the grave also belong to him.
by Anadolu Agency Jan 07, 2019 12:00 am

The "Golden Man" found in Kazakhstan 50 years ago, continues to shine a light on archaeological research on how gold was used in the moors of Kazakhstan.

Found in 1969 by Kazakh archaeologists near the city of Almaty, close to the Esik River, the Golden Man is preserved by the Kazakhstan National Museum and belongs to the Saka period five centuries before the birth of Christ.

Covered with thousands of pieces of gold, the man's suit is composed of a shirt, boots and headgear and it is presumed that the golden earrings and rings from the grave also belong to him.

Known as the "Tutankhamun of Kazakhstan" by scientists, the Golden Man is an 18-year-old Saka soldier.

Speaking to Anadolu Agency (AA), the Chairman of the Kazakhstan National Museum Public Treasury Science and Research Institute, Akan Ongarulı noted that the suit of the man was created with perfect workmanship by using battering, stamping, carving and granulation techniques.

He further noted that there are pictures of snow leopards, deer, mountain goats, horses and various birds on the golden ornaments.

In their research, they discovered that along with the gold processing technology of the Saka nation, they also valued culture and secret codes. Ongarulı said that findings such as the Golden Man suit showed that the community produced and processed gold.

He further noted that through research on archaeological ruins, they learned about the art of jewelry, their worldviews and architecture and added that the Kazakh civilization takes its roots from the Saka and Bronze Ages.

Adding that civilizations have reached where they are today through the various social changes of each age, Ongarulı said that Kazakh traditional jewelry resembles Saka jewelry.

The Golden Man was found in the city of Esik during the Soviet Union period, while archaeological excavations carried out after 1991 also discovered there were other men in gold suits but they were looted.

The findings are preserved at the Kazakhstan National Museum, the Almaty Central Museum and History Museum of East Kazakhstan and show that Kazakhs lived on these lands for centuries.

According to the findings, the Golden Man can be dated to the late Bronze Age or early Iron Age.

The bones of the Golden Man are planned to be buried this year in accordance to the traditions of the Saka.