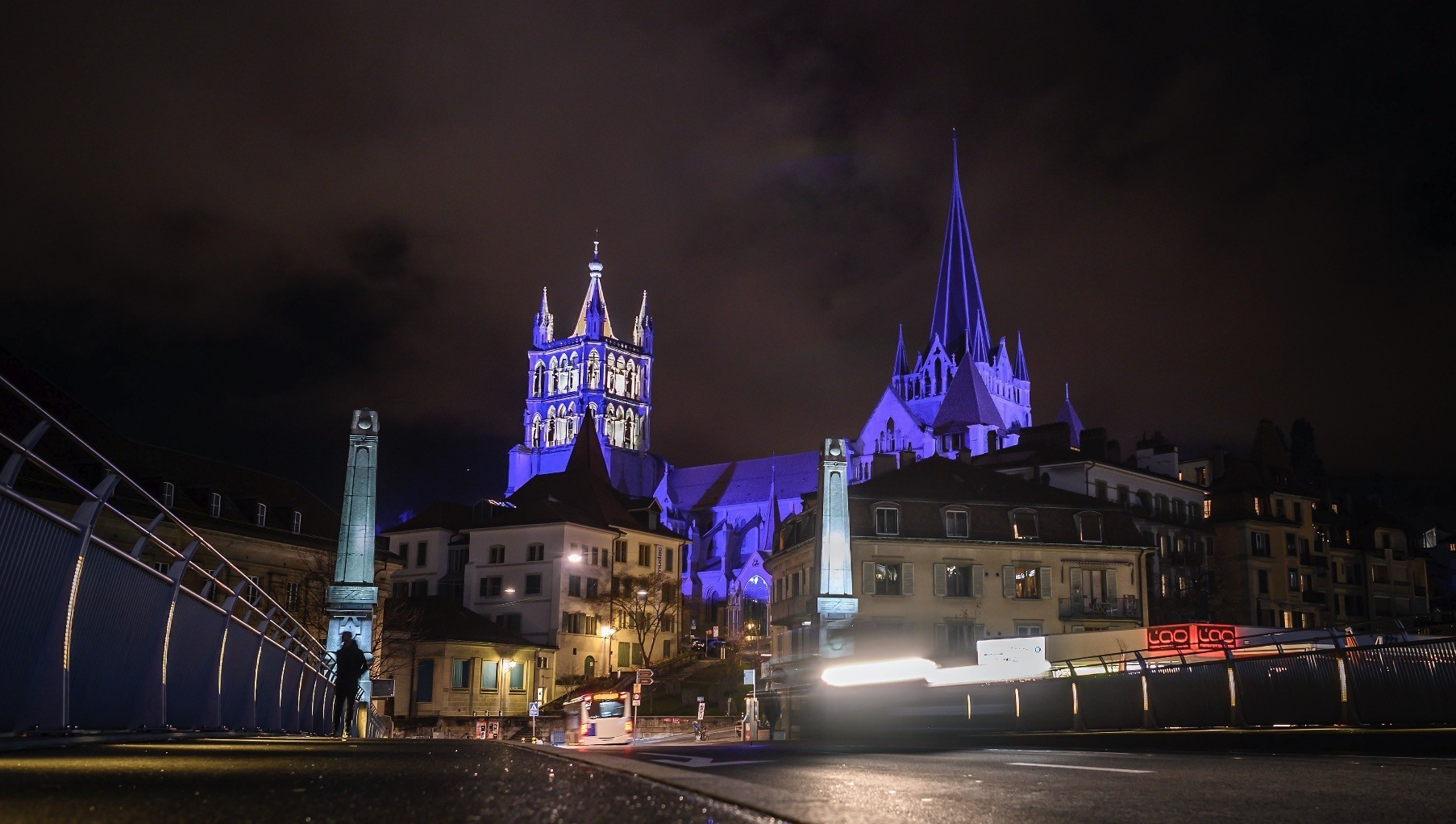 Every evening, the night watchman clambers to the top of the Lausanne cathedral bell tower and gets to work: he shouts out the time each hour, keeping a six-century-old tradition alive.
by Jan 21, 2019 12:07 am

Every evening, the night watchman clambers to the top of the Lausanne cathedral bell tower and gets to work: he shouts out the time each hour, keeping a six-century-old tradition alive.

The night watchman, one of the last in Europe, no longer alerts this Swiss city to fires, but he does help residents to keep track of the time.

On a cold night in December, Marco Carrara, who takes on the job on the permanent watchman's days off, repeats the message hourly, only changing the number of chimes that have rung.

Cupping his hands around his mouth, he allows his voice to carry across the rooftops, just as his predecessors have done every evening since 1405. All year round, from 10:00 pm to 2:00 am, the night watchman, wearing a big black hat and carrying a lantern, steps out to the bell tower railing to serve as a living clock for the people of this picturesque city on the shores of Lake Geneva.

The night watchman used to play a far more vital role. Back when fire constituted a permanent threat to medieval towns and cities built in wood, he was an essential part of a network of watchmen, most of whom patrolled the streets.

From his perch, the cathedral watchman was tasked with sounding the alarm at the first whiff of smoke. Across Europe, there were "thousands, if not tens of thousands" of watchmen protecting urban spaces from fire, said Renato Haeusler, who holds the permanent watchman position in Lausanne.

But as technology advanced, the once ubiquitous position became largely obsolete and the watchmen all but disappeared across the continent. Today, Lausanne is one of just seven European towns or cities to have maintained the tradition of a year-round watchman, alongside Annaberg, Celle and Noerdlingen in Germany, Ripon in Britain, Krakow in Poland and Ystad in Sweden.

In Lausanne, the watchman used to be entrusted with manually ringing the bell on the hour, but in 1950, the task fell to automation.

Haeusler climbs the 153 worn stone steps to the top of the bell tower to announce the time about four evenings a week, for a salary he says is "well below" the going rate for nighttime work.

But he has a second job too, lighting events and soirees in the region using wax candles. He sometimes spends his hours as a watchman dipping a wick into hot wax to make the candles.

On the evenings that he doesn't work, a replacement steps in.

"The evenings can be quiet and quite lonely," Carrara told AFP during one of his shifts last month.

Although sometimes they can be more animated, he said, such as when "Lausanne residents, people from the region, and even tourists have the possibility to visit the watchman."

"We are both at the heart of the city and outside of it," he said, adding that he had been drawn to the "nobility of this task," which runs "counter to utilitarianism."

Between 600 and 700 people visit the tower during the evening watch each year, according to Haeusler.

From his viewpoint more than 40 meters above the city, the watchman can observe it change with the seasons.

"In the summer, it is magnificent. Swifts nest in the upper walkway. They are there in the evening, flying around," Haeusler said.

He said he felt privileged to be "the last link in a chain of men [doing this job] dating back to the 15th century." The watchman's permanent presence provides a kind of landmark for the residents of the city, he said.

"In a completely chaotic world, I think that it is reassuring to have activities continue for a very long time, becoming traditions, and allowing us to rediscover a few of our roots."