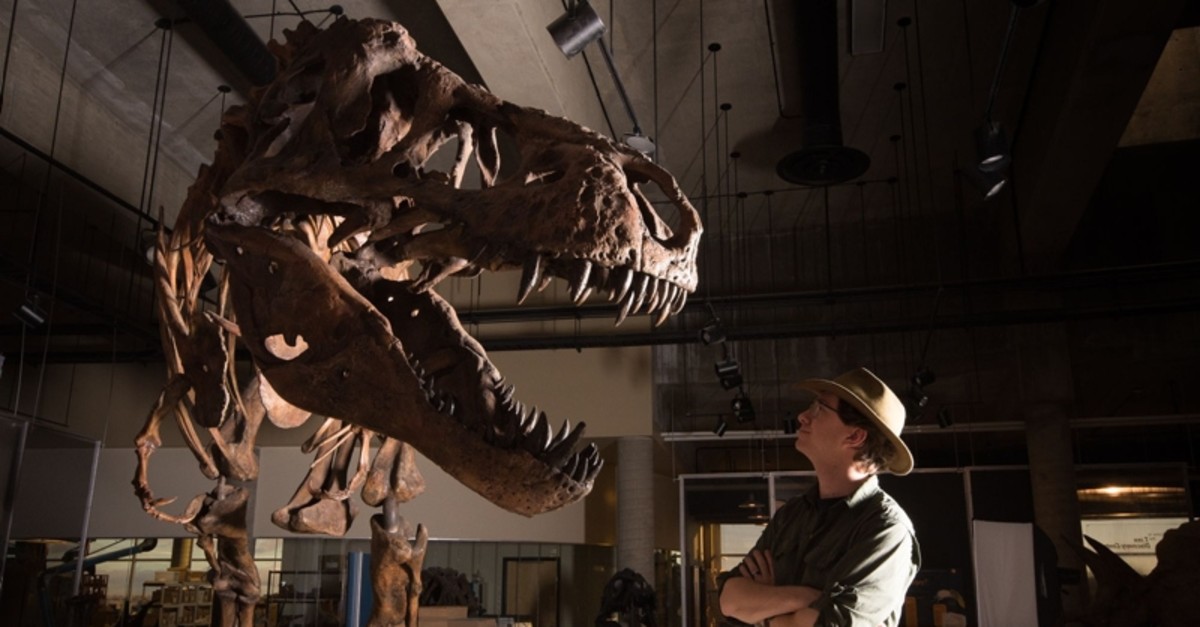 This undated handout photo released by the University of Alberta shows Dr W. Scott Persons looking at the skeleton of the Tyrannosaurus rex ,Scotty, at the T. rex Discovery Centre in Eastend, Canada. (AFP Photo)
by Daily Sabah with AFP Mar 25, 2019 12:00 am

A group of paleontologists from the University of Alberta in Canada has identified a skeleton discovered in the western Saskatchewan province as the world's biggest and oldest Tyrannosaurus rex, media reports said Friday.

The skeleton was initially found in 1991, but it took more than two decades for paleontologists to remove the sandstone covering the bones.

Paleontologists said that the meat-eating theropod dinosaur, which lived roughly 66 million years ago, weighed about 400 kilograms (882 pounds) more than its heaviest counterparts, at 8,800 kilograms (19,400 pounds). The skeleton was 13 meters (43 feet) long.

"This is the rex of rexes," said Scott Persons, lead author of the study and postdoctoral researcher in the Department of Biological Sciences.

"It was basically like cement encrusting the skeleton," he told Canada-based news channel CTV News.

"Scotty is the oldest T. rex known," having lived into its 30s, Persons said.

"By Tyrannosaurus standards, it had an unusually long life. And it was a violent one," Persons said. "Riddled across the skeleton are pathologies – spots where scarred bone records large injuries."

The skeleton, which was named "Scotty," will be on display at the Royal Saskatchewan Museum in Regina beginning in May.

Paleontologists believe the Tyrannosaurus was both an active predator and a scavenger and lived throughout western North America.

The T. rex, among the world's largest dinosaur species, has become the most iconic dinosaur today, easily recognizable with its massive skull balanced by a long heavy tail.