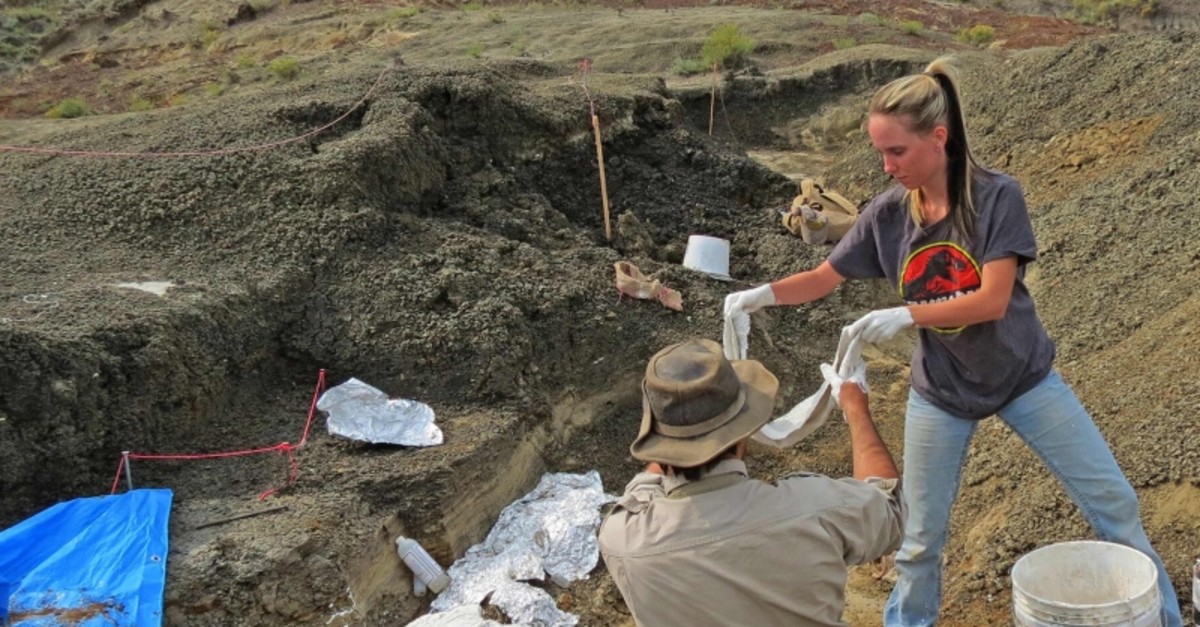 This photo taken and handout on March 29, 2019 by the University of Kansas,shows Robert DePalma(L)and field assistant Kylie Ruble(R) excavate fossil carcasses from the Tanis deposit (AFP Photo)
by Apr 03, 2019 12:00 am

Paleontologists generally grapple with a time frame of millions of years.

But Robert DePalma believes he can explain the minutes and hours that followed one of the most cataclysmic events in the history of the Earth -- the day a meteor slammed into the coast off what is now Mexico.

The impact of the Chicxulub asteroid 66 million years ago left a massive crater and triggered the mass extinction of land and sea creatures.

DePalma has been digging for the past seven years at a site in North Dakota that he and other scientists believe provides a unique fossilized record of what happened on that day.

"You seldom get this opportunity at fine-tuning the timing of any event in geologic history," DePalma said in an interview with AFP. "It's very, very rare to get this."

DePalma, a 37-year-old paleontologist and 11 co-authors published a preliminary study of their findings on Monday in the Proceedings of the National Academy of Sciences.

It has the scientific world buzzing.

DePalma first began digging, while a graduate student at the University of Kansas, at the site known to dinosaur hunters as Tanis in the Hell Creek Formation in North Dakota.

Over the years, he and several of his assistants discovered in a layer of sediment about 4 feet (1.3 meters) thick the fossils of fish, plants, trees and mollusks jumbled together.

"You've got this deposit that was almost instantaneously laid down," DePalma said.

"This muddy deposit that locked in place all these plants and animals almost instantaneously, within moments," he said.

DePalma likened it to Pompeii, the Roman city buried in a volcanic eruption in 79 A.D. and left remarkably preserved.

"Very similar to Pompeii," he said. "You've got this instant preservation of so many different things."

The asteroid struck 1,895 miles (3,050 kilometers) away in what is now the Yucatan Peninsula in Mexico.

Scientists have long pointed to the impact of the Chicxulub meteor as responsible for the extinction of the dinosaurs, paving the way for the rise of mammals including humans.

Fire, smoke, ash and debris engulfed the atmosphere, eventually destroying almost all plants and wiping out 75 percent of species on Earth.

The seismic surges triggered a sudden, massive torrent of water and debris from an arm of an inland sea known as the Western Interior Seaway.

Some of the fish were found to have inhaled tiny beads of glass, or "spherules" that were ejected by the Chicxulub event and rained down on Tanis probably about 15 minutes after the impact.

Many of the fossils found at the Tanis site are preserved in three dimensions instead of just flat shapes.

"Until this deposit, there were only three or four articulated fish ever found in the Hell Creek Formation, ever," said DePalma, an adjunct professor of geosciences at Florida Atlantic University.

Several scientists have pointed to a lack of information in the study about the fate of the dinosaurs or mention of other purported discoveries that were included in a press release over the weekend but not in the actual paper.

"Everyone is baffled more by the number of really unusual things that were claimed," said Kirk Johnson, director of the Smithsonian National Museum of Natural History.

"And that number of unusual claims, most of them didn't make it into this paper," Johnson said.

At the same time, Johnson said the study was "interesting" and was lent credibility by the association of Walter Alvarez, a professor at the University of California, Berkeley who was the first to put forward, in 1980, the theory that a meteor impact was behind the extinction of dinosaurs.

DePalma said there was much more to come and his team has just begun to uncover the secrets of the site.

"I have a feeling that at least some portion of my research moving forward will be centered there for many decades to come," he said.

"This is the nature of science. We are constantly refining our interpretations based on whatever data we've got," he said.