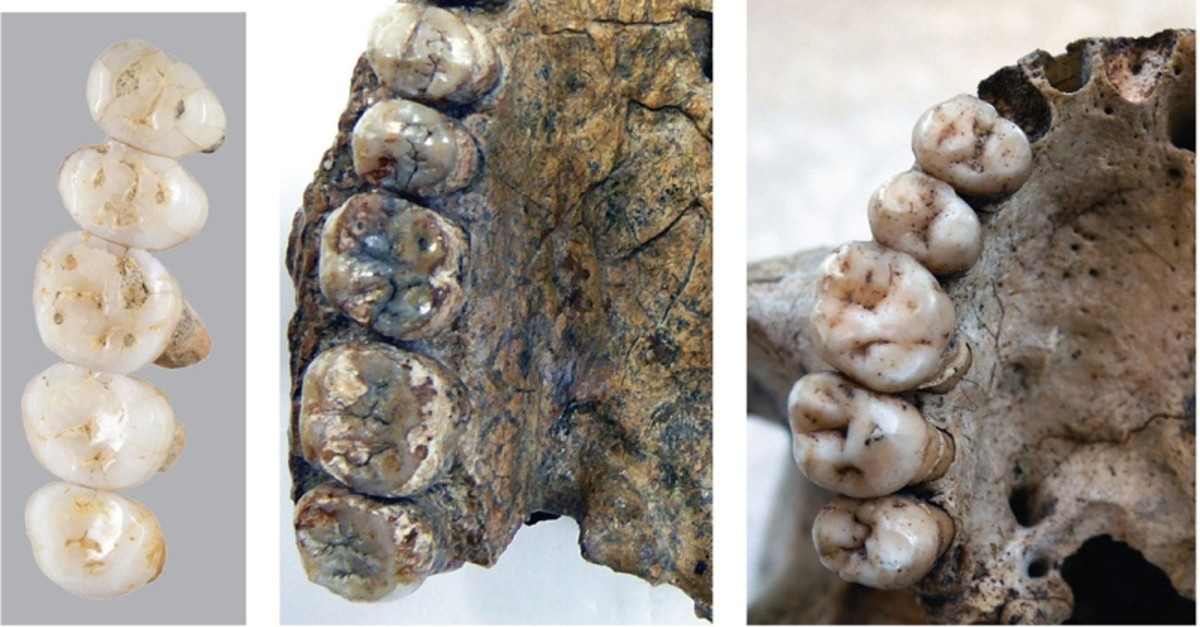 A handout image made available by Florent Detroit and taken on March 15, 2019 compares the fossil teeth of the newly discovered species Homo Luzonesis and that of Errectus Sapiensa unearthed during the excavation in in northern Philippines. (AFP)
by reuters Apr 10, 2019 11:04 pm

Thirteen fossil bones and teeth excavated in a cave in the Philippines represent an enigmatic previously unknown human species, probably small in stature and possessing an unexpected mix of archaic and modern traits, scientists said Wednesday.

The discovery of remains of at least three individuals from this species, named Homo luzonensis, in Callao Cave on the northern part of the island of Luzon marked the second time in the 21st century that a bygone member of the human family has been found on southeast Asian islands.

The researchers were unable to extract DNA but did determine that one of the individuals lived 67,000 years ago and the other 50,000 years ago.

In 2003, fossils of another island-dwelling species - Homo floresiensis, dubbed the "Hobbit" due to its diminutive size - were unearthed in a cave on the Indonesian island of Flores, some 1,800 miles (3,000 km) from the Luzon site. There is no indication the two species interacted or were closely related.

Homo luzonensis was a contemporary not only of the Hobbit but of our own species, Homo sapiens, which emerged in Africa roughly 300,000 years ago.

The scientists said they could not rule out the possibility that the arrival of our species in the region contributed to the demise of Homo luzonensis. The Hobbit also disappeared about 50,000 years ago at the same time Homo sapiens was spreading through the region.

The Luzon and Flores discoveries demonstrate that the story of human evolution is more complicated than previously understood, with Asia offering up surprises, potentially with more to come, the researchers said.

The researchers were circumspect in describing the physical appearance and lifestyle of Homo luzonensis, known only from a sparse assemblage of hand and foot bones, and teeth from two adults and one juvenile, with no skull fossils. Based on tooth size in particular, it appears it might have been much smaller than Homo sapiens, but it is unclear whether it was as little as the Hobbit, which was roughly 3-1/2 feet (1 meter) tall.

"We have to stay cautious about it, especially because people will immediately have Homo floresiensis in mind as a 'model' for the physical appearance of Homo luzonensis, which was certainly not the case," said paleoanthropologist Florent Détroit of the Musée de l'Homme-Muséum National d'Histoire Naturelle in Paris.

"We can only speculate but it might be only in the range of a pygmy Homo sapiens," added archaeologist Armand Mijares, leader of the Callao Archaeological Project.

The research was published in the journal Nature.

Based on animal bones with butchering marks found at the site, it appears these people ate meat and may have used stone tools, Détroit said.

The fossils from the seven-chamber cave, situated in the foothills of Luzon's northern Sierra Madre mountains, boasted a combination of anatomical features setting it apart from other human species.

Some characteristics were similar to Homo sapiens as well as the Hobbit. Other traits were so archaic that they resembled Australopithecus, an earlier member of the human evolutionary lineage that died out roughly 2 million years ago, as well as the ancient human species Homo habilis and Homo erectus.

"For years - and until less than 20 years ago - human evolution in Asia was seen as very simple, with Homo erectus going out of Africa, settling in east and southeast Asia, and then nothing happened until the arrival of Homo sapiens at around 40,000 to 50,000 years ago and its 'conquest' of every region on Earth," Détroit said.

"With the discoveries made on the field - fossils - and in the lab, for instance genetics, we now know that it was a much more complex evolutionary history, with several distinct species contemporaneous with Homo sapiens, interbreeding events, extinctions, et cetera," Détroit added. "Homo sapiens was definitely not alone on Earth."