Tutankhamun relic sells for $6 million in London despite Egypt's outcry 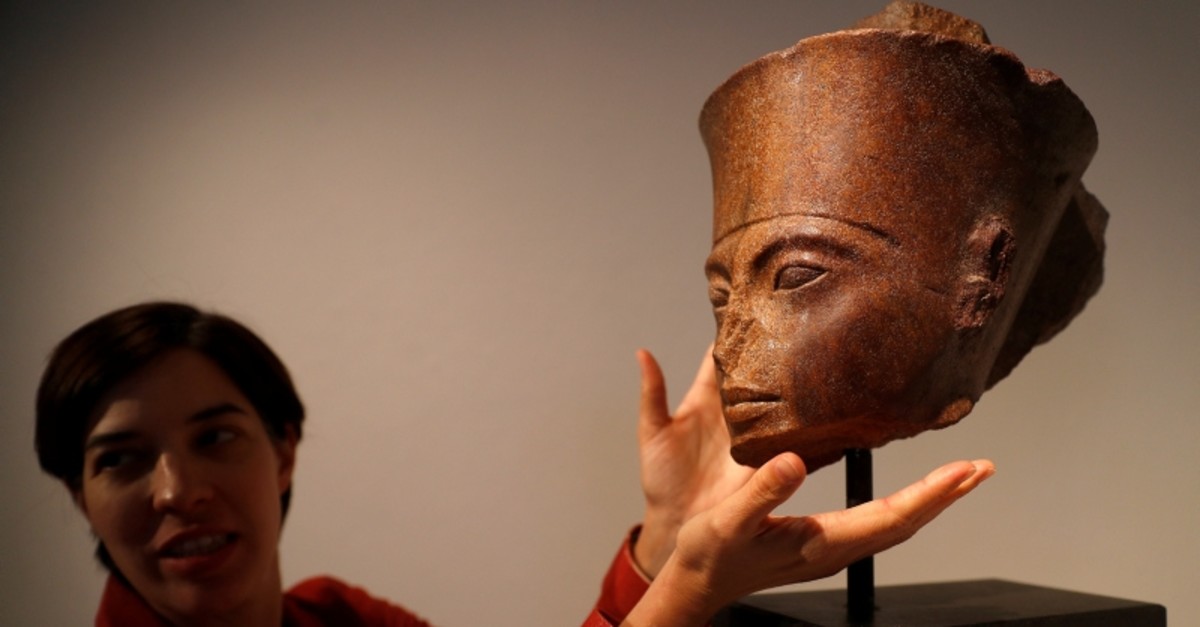 Laetitia Delaloye, head of antiquities of Christie's, poses for a photograph with an Egyptian brown quartzite head of Tutankhamun prior to its' sale at Christie's auction house in London, Britain, July 4, 2019. (Reuters Photo)
by Daily Sabah Jul 04, 2019 9:40 pm

A 3,000-year-old quartzite head of Egyptian "Boy King" Tutankhamun was auctioned off for $6 million on Thursday in London despite an outcry from Cairo.

No information about the buyer was disclosed.

The famous pharaoh's finely-chiselled face -- its calm eyes and puffed lips emoting a sense of eternal peace -- came from the private Resandro Collection of ancient art that Christie's last auctioned off 2016 for 3 million pounds.

Former antiquities minister Zahi Hawass told AFP that the piece appears to have been "stolen" in the 1970s from the Karnak Temple complex just north of Luxor.

"We think it left Egypt after 1970 because in that time other artifacts were stolen from Karnak Temple," Hawass said.

Christie's countered that Egypt had never before expressed the same level of concern about an item whose existence has been "well known and exhibited publicly" for many years.

"The object is not, and has not been, the subject of an investigation," it said in a statement to AFP.

The auction house has published a chronology of how the relic changed hands between European art dealers over the past 50 years.

Its oldest attribution from 1973-74 places it in the collection of Prince Wilhelm of Thurn and Taxi in modern-day Germany.

Yet that account was called into doubt by a report from the Live Science news site last month suggesting that Wilhelm never owned the piece.

Wilhelm was "not a very art-interested person," his niece Daria told the news site.

A journalist and art historian who knew Wilhelm told Live Science site that the prince had no arts collection at all.

Tutankhamun is thought to have become a pharaoh at the age of nine and to have died about 10 years later.

His rule would have probably passed without notice were it not for the 1922 discovery by Britain's Howard Carter of his nearly intact tomb.

The lavish find revived interest in ancient Egypt and set the stage for subsequent battles over ownership of cultural masterpieces unearthed in colonial times.

Tutankhamun became commonly known as King Tut and made into the subject of popular songs and films.

International conventions and the British government's own guidance restrict the sale of works that were known to have been stolen or illegally dug up.

The British Museum has been wrangling for decades with Greece over its remarkable room full of marble Parthenon friezes and sculptures.

Cairo has managed to regain hundreds of looted and stolen artifacts by working with both auction houses and international cultural groups.

But Egypt has been unable to substantiate its case with firm proof that the Tutankhamun bust was illegally obtained.

Christie's told AFP that it would "not sell any work where there isn't clear title of ownership."