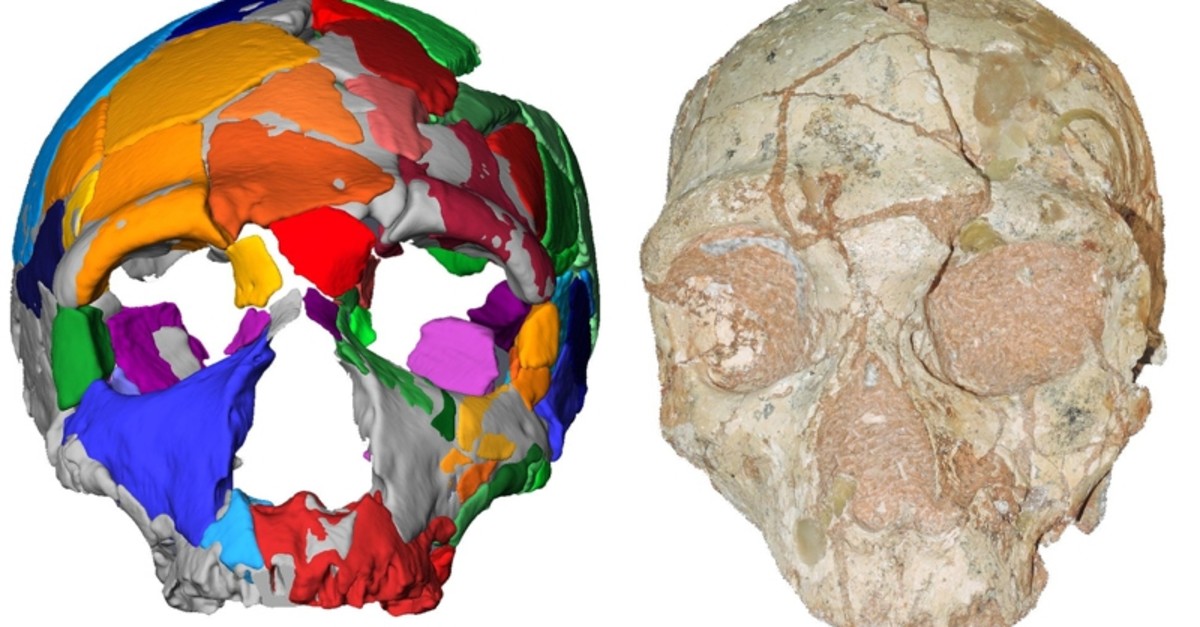 This handout picture released on July 10, 2019, by Eberhard Karls University of Tuebingen shows a reconstruction and computer model of part of a skull named Apidima 2, discovered in a Greek cave. (AFP Photo)
by Associated Press Jul 10, 2019 8:20 pm

Scientists say they've identified the earliest sign of our species outside Africa, a chunk of skull recovered from a cave in southern Greece.

Its estimated age is at least 210,000 years old, making it 16,000 or more years older than an upper jaw bone from Israel that was reported last year. It shows our species began leaving Africa much earlier than previously thought, researchers reported Wednesday.

The travelers to Greece evidently left no descendants alive today. Other research has established that the exodus from Africa that led to our worldwide spread didn't happen until more than 100,000 years later. The new work is the latest sign of earlier, dead-end exits from the continent where Homo sapiens evolved.

The fossil, from the rear of a skull, was actually found decades ago — excavated in the late 1970s from the Apidima Cave in the southern Peloponnese region of Greece and later kept in a University of Athens museum.

"Not a lot of attention was paid to it," said Katerina Harvati of the University of Tuebingen in Germany, who was invited to study the fossil.

Harvati and others report the results of their analysis in the journal Nature. To establish the age, they analyzed bits of bone from the fossil. To identify what species it came from, the researchers compared a virtual reconstruction to the shapes of fossils from known species.

Harvati said finding evidence that our species had reached Greece by that time was initially a surprise, though in hindsight "it's not that difficult to imagine that it would have happened."

Eric Delson of Lehman College in New York, who did not participate in the study, said the discovery was somewhat surprising but that southeastern Europe "makes a lot of sense" for a finding that old. Now the question is what happened to these people, he said. Did Neanderthals out-compete them?

But some other scientists are not convinced the fossil's reported age and identification are correct.

Warren Sharp, an expert on dating fossils at the Berkeley Geochronology Center in California, said the age of 210,000 years is "not well supported by the data."

Ian Tattersall of the American Museum of Natural History in New York called the case for identifying the fossil as H. sapiens "pretty shaky." Its shape is suggestive, but it's incomplete and it lacks features that would make the identification firmer, he said in an email.

In response, Harvati said the back of the skull is very useful for differentiating H. sapiens from Neanderthals and other related species, and that several lines of evidence support the identification.

At a press conference, Harvati said it's not clear whether scientists will be able to recover DNA or proteins from the fossil to confirm its identity.