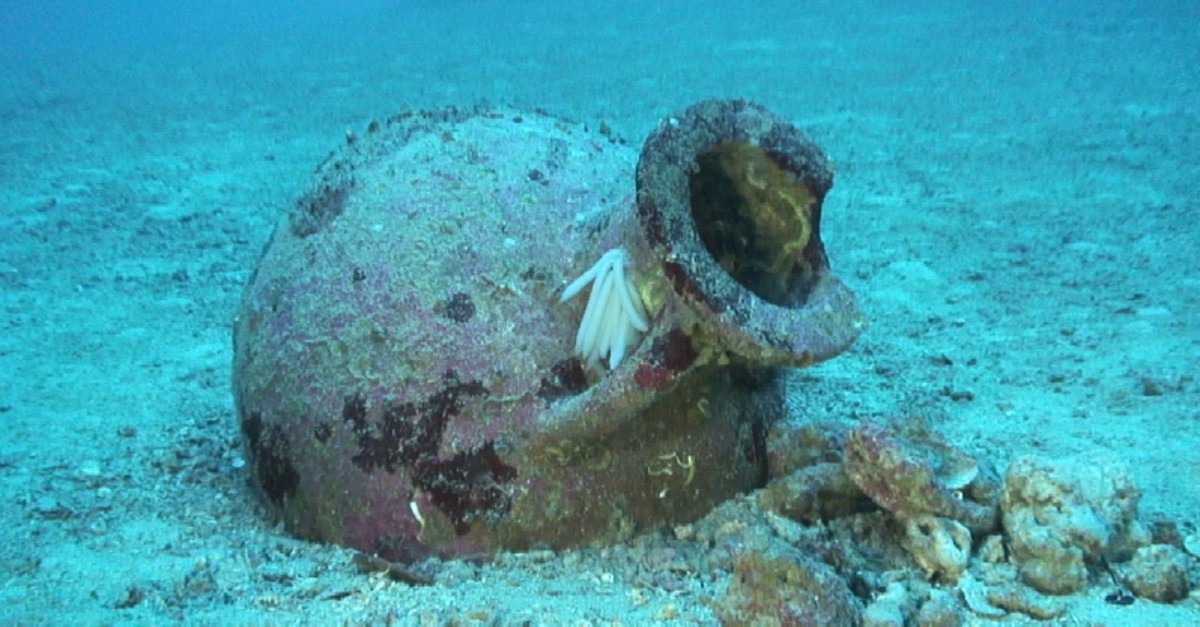 In this undated photo provide by PRM Nautical Foundation on Friday, July 12, 2019, an amphora which dates from between the 7th and 5th centuries BC stands underwater near the shores of the Karaburun peninsula, Albania (AP Photo)
by Associated Press
Jul 12, 2019 6:11 pm

A joint Albanian-American underwater archaeology project says it has found amphoras that are at least 2,500 years old in the Ionian Sea off the Albanian coast, which might yield an ancient shipwreck.

The research vessel Hercules of the RPM Nautical Foundation said Friday they had found 22 amphoras — a two-handled jar with a narrow neck used for wine or oil — 40-60 meters (yards) deep scattered around the seabed close to rocky shores near the Karaburun peninsula.

Archaeologist Mateusz Polakowski said they believe the Corinthian A type amphoras date to between the 7th and the 5th century B.C.

"If the remains of a wreck can be found, it will put this discovery as the earliest ship ever to be sailing along the Albanian coast," said Polakowski.

RPM chairman James Goold considered the site as "one of the most important of all of our discoveries ... (and) it will be very important from a historical and archaeological perspective" if confirmed.

Further investigation of the site will be necessary.

Albanian archaeologist Neritan Ceka said similar wine amphoras of Corinthian and Kerkira origin have been found in Durres and Apolonia and other inland areas in Albania, something which indicates the intensive trade during the second half of the 7th century B.C. along the Albanian coast.

Since 2004, RPM has mapped Albania's offshore seabed for ancient and modern shipwrecks, with ongoing plans to open an underwater museum in western Albania.

"It certainly would be a great starting point for a national program around which to establish a museum and show the pivotal role of Albania in antiquity," said Goold.

Ceka said Albanian authorities are planning a new four-to-five-year project with RPM and the Texas-based not-for-profit Institute of Nautical Archaeology, to explore the possibilities of excavating shipwrecks, a financially expensive and scientifically delicate process.

The research in Albania has so far uncovered 28 wreck sites as well as several amphora mounds and additional finds all the way from southernmost Sarande and Butrint to Durres and it is planning to go north of Durres afterward.

RPM's presence in the last 12 years has been a "huge step" to Albania's science of underwater archaeology, according to Auron Tare, UNESCO head of the Scientific and Technical Committee for World Underwater Heritage.

"If confirmed this shipwreck can be associated with the foundation of two major cities in Albanian coastline, Dyrrachium (modern Durres) and Apolonia, both the gates of Via Egnatia, the ancient road to the eastern trade," said Tare.

"We have discovered not only ancient shipwrecks but also a good number of WWI and WWII shipwrecks shedding light to an unknown chapter of our history," said Tare.

Albania is trying to protect and capitalize on its rich underwater heritage, with scant funding for its preservation from the government one of Europe's poorest nations.