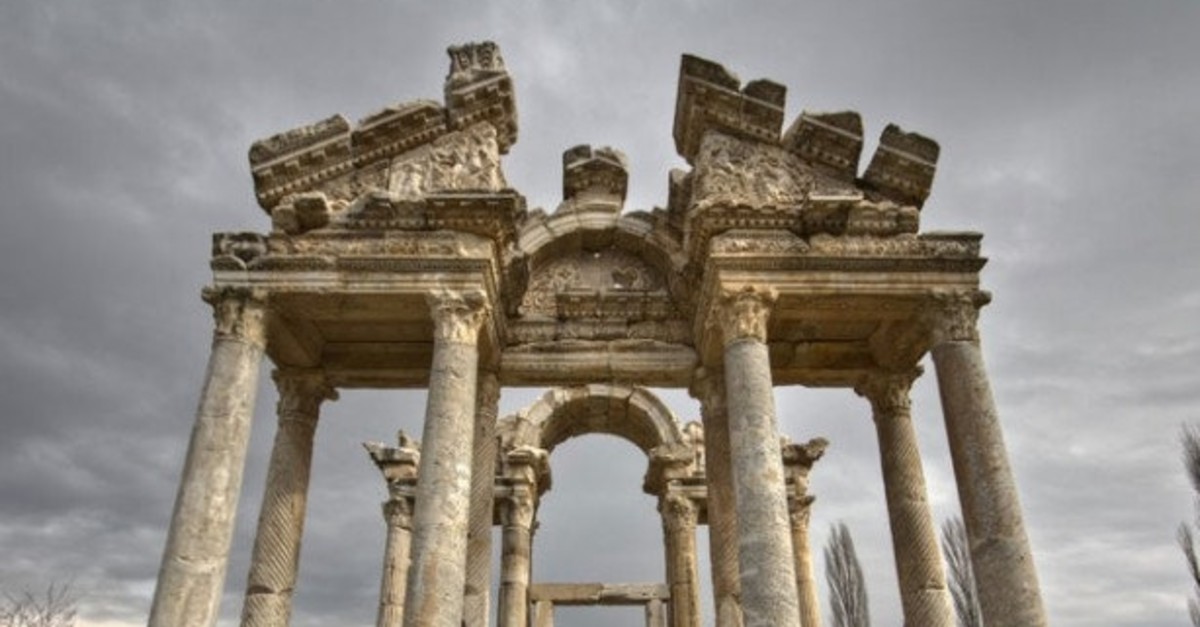 With giant sculptures and reliefs excavated, the ancient city of Aphrodisias welcomes history buffs and art lovers every year.
by Anadolu Agency Aug 01, 2019 12:36 am

Included on the UNESCO World Heritage List and hosting 150,000 visitors last year in Aydın's Karacasu district, the ancient city of Aphrodisias is expecting a 100% increase in the number of tourists it receives.

The excavations, which started in 1904 by foreign archaeologists and lead by professor Kenan Erim between 1961 and 1990, continue under the leadership of professor Roland R. R. Smith from Oxford University, after Erim passed away.

One of the most famous cities devoted to Aphrodite, the goddess of love and beauty in the ancient times, the city of Aphrodisias stood out as a center of sculpture during the Roman times. With giant sculptures and reliefs excavated, the city welcomes history buffs and art lovers every year.

The giant city pool, reflecting the glory of the Roman times, Tetrapylon gate, Sebasteion temple, the stadium, ancient theater and other structures such as the Turkish bath take visitors on a historical journey.

Most important of 22 ancient cities

Speaking to Anadolu Agency (AA), Provincial Culture and Tourism Director Murat Yılmaz noted that Aphrodisias is one of the most important of the 22 ancient cities in the city and the number of visitors has seriously increased in recent years.

Yılmaz, stating that the ancient city was visited by 150,000 people last year, added, "There is a serious increase in the last three years. It continues to increase every year. The number of tourists increased rapidly especially with the inclusion of Aphrodisias in the UNESCO World Heritage List. We are hoping to break a record and host 300,000 visitors this year." The head of the excavation team professor Roland R.R. Smith expressed that they were glad for the increase in visitors and the most important thing is for their work to be appreciated by the visitors.

"Our job is meaningless if nobody looks or comes. This is for the visitors. All our conservation and restoration works are planned for receiving an intense number of tourists. The durability of walls and floors is strong enough to carry a few thousand visitors," Smith said.

Julianne Laczkowski, one of the visitors, noted that she was visiting Turkey for the first time and loved its nature and weather. "I am enchanted by Aphrodisias," Laczkowska said. She noted she has been to other ancient cities such as Ephesus and Bergama but Aphrodisias is completely different and that this place was the best place for her so far.

Suzanna Laczkowska said, "I like this place very much, everything looks very nice. I liked the stadium, because I like sports. Plus, the sculptures on display in the museum were amazing. Almost all structures retain their characteristic. I hope everyone has time to come and visit these places."

Teacher İsmail Termek said that they were very impressed by the city to which they came as a family and that he plans to bring his students here.