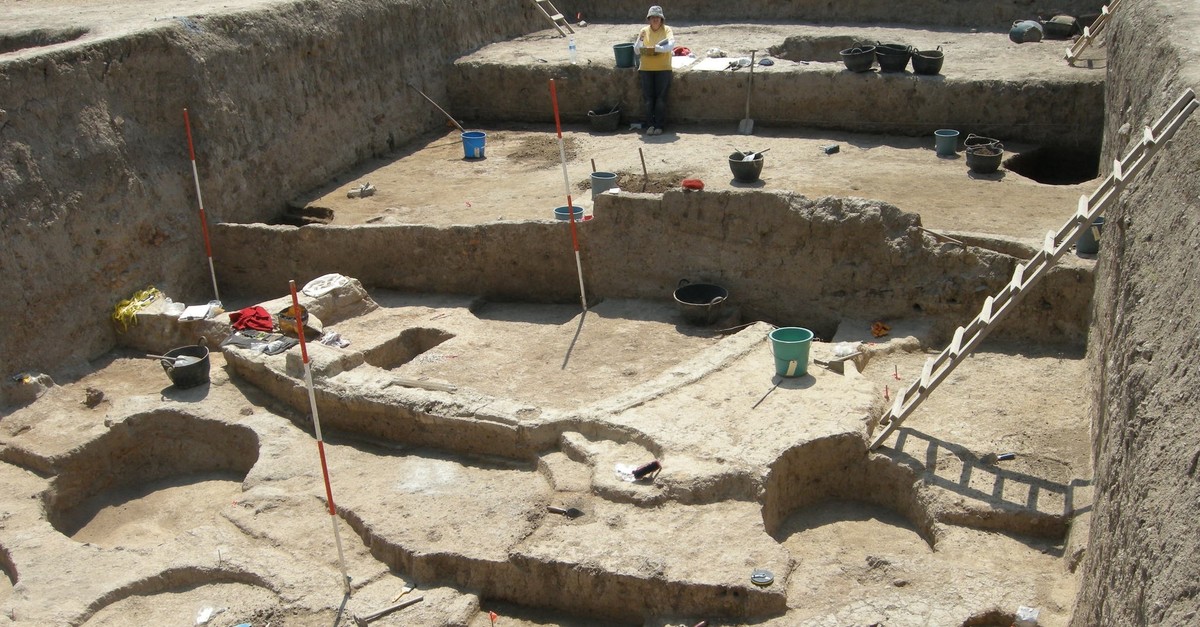 The earliest known production of dairy products has been identified by archeologists in the Yenişehir district of Bursa in northwestern Turkey.

Archeologists digging at the Barcın Mound found that cheese, yogurt and butter were first produced 8,600 years ago during the Neolithic Era. Barcın Höyük is one of the earliest farming communities in northwestern Turkey, going back to more than 8,000 years ago.

The archeological excavations at the Yenişehir site began in 2009 with the contributions of Koç, Boğaziçi and Ege Universities and were completed under the Netherlands Institute in Turkey with the permission of the Ministry of Culture and Tourism. The digs at Barcın Mound have uncovered information about the earliest inhabitants of the Yenişehir Plain, the archeological team said.

Rana Özbal, a researcher from Koç University Department of Archeology and Art History who is working on the excavations, told Demirören News Agency (DHA) that the earliest production of dairy products has been scientifically proven at the ancient site.

Özbal said that besides the upper levels from the Byzantine, Early Bronze Age and Late Chalcolithic periods, the best preserved and therefore most extensively studied layer of the mound dates back to the Neolithic Period, from 6,600-6,000 B.C.

"In the Neolithic period, which was described as a revolution, the transition from hunter-gatherer lifestyle to agriculture, animal husbandry and settled life was adopted," Özbal said, noting that researchers believe this lifestyle shift began in the Fertile Crescent region in 9,000 B.C.

The new lifestyle – which was marked by pottery, settlements, domestic animals and farming of cereals – spread to Central Anatolia and later to the Marmara Region, where modern-day Bursa is located.

The team has found pottery in the earliest levels of the mound, which were clearly refined and improved over time, Özbal said.

"One of the reasons for the technological progress of pottery may be related to the emergence of milk as an important food source in this region," she said.

Özbal explained that in the 2000s, a method for detecting milk fat in the pores of pottery was developed in the United Kingdom. The method has been used by the Archaeometry Research Center of Boğaziçi University since 2007, with the support of TUBITAK Marmara Research Center.

"The results found the presence of milk lipids from the lowest levels in Barcın Mound. It was concluded that the products such as cheese, butter and yogurt were produced in Yenişehir Plain before many regions of Anatolia," she said, adding:

"When analyzed in regional context, both national and international organic residue analysis results indicate that it is the earliest detected region in the world for milk use. Therefore, it is not wrong to say that Barcın Mound settlement and Yenişehir Plain played a leading role in milk production. Our findings prove that milk was consumed by processing 8,600 years ago."

Özbal noted the other discoveries at the mound that have identified its Neolithic inhabitants.

"The most important indicator of the transition to settled life is architecture. The structures in Barcın Mound were built with twigs as understood from the pile holes. There are large courtyard spaces between the buildings," Özbal said.

Dead bodies were buried in the ground in the fetal position, she noted.

A nutritional economy based on agriculture and animal husbandry is another important indicator of the Neolithic lifestyle, Özbal said, noting that many domesticated seeds such as wheat, barley and lentils, as well as the bones of domesticated cattle, goats and sheep have been unearthed at Barcın Mound.

The presence of workshops uncovered in various areas of the settlement show that Neolithic inhabitants of Barcın Mound produced their own tools for craft production, she said, pointing to the division of labor brought about by a settled lifestyle.

"We found sharpeners used to sharpen bones to produce tools, stone axes and materials used to polish skin and this points to the probability that the community was also involved in leather manufacturing," she said.

"In addition, a large part of the daily life of the inhabitants, as understood from the tandoor and ovens, was dedicated to cooking," she added.

The Barcın Mound is located 5 kilometers west of Yenişehir town in Bursa province. Though the site was surveyed in the 1980s by Mehmet Özdoğan and noted in the literature of British archeologists James Mellaart and David French, it was not studied in depth until 2005. Since then, excavations have discovered evidence of inhabitation during the Late Neolithic, Late Chalcolithic, Early Bronze Age, Hellenistic and Roman periods, and the rule of the Byzantines.