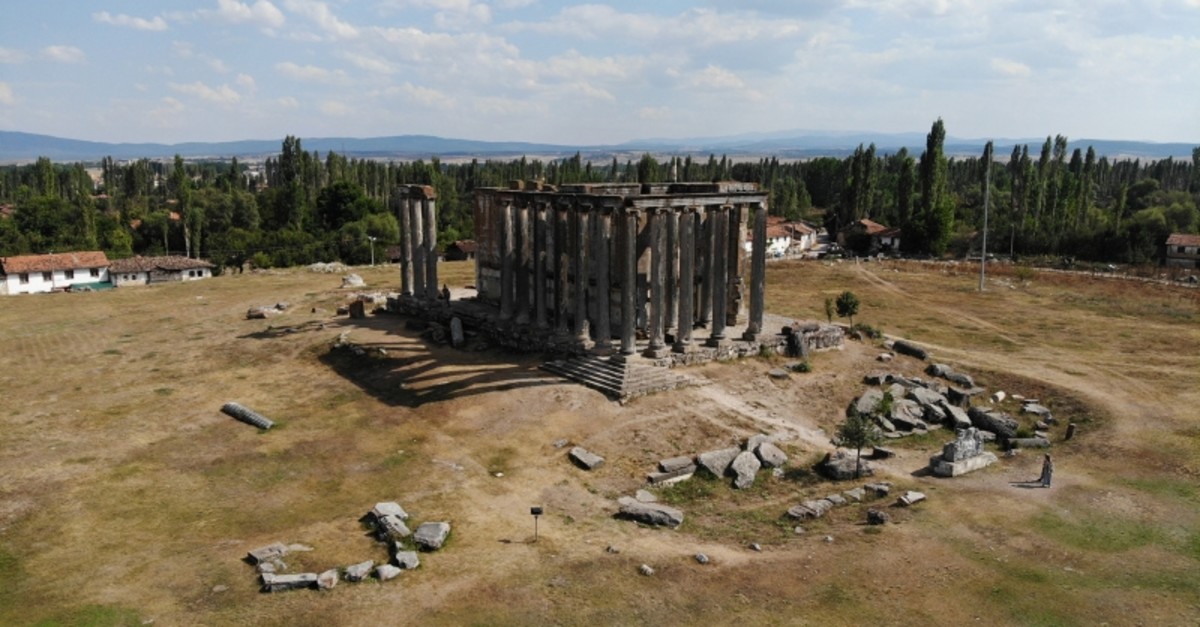 Archeologists have unearthed remains of the memorial tomb of Azan, founder of the ancient city of Aizanoi in western Turkey.

Located in the western province of Kütahya's Çavdarhisar district, the Aizanoi ancient city is believed to have taken its name from Azan.

Zerrin Erdinç, deputy head of the excavation team, told Anadolu Agency that the excavations being conducted in the region since 2011 have unearthed many historical links.

Archaeologists maintain that the area added to the UNESCO World Heritage Tentative List in 2012, has revealed settlements dating as far back as 3000 B.C.

"During our previous researches, we predicted that there could be a tomb here. We were carrying excavations around agoras or ancient city centers. We have found traces of a monumental tomb," said Erdinç.

She said the excavations were expanded when steps and blocks usually kept around tombs were found. Mostly tomb of the founder of the city is placed in agoras.

"The location and nature of tomb that we call heroon, makes us believe that it belongs to Azan, the founder of the city," she said. A heroon is a tomb or a temple in an agora, surrounded by galleries.

Erdinç, who is also an academic at Dumlupınar University in Kütahya, said that excavators have also discovered a route from Aizanoi's agora or city center leading to the Temple of Zeus.

"After passing through the agora, there is a route that leads to the Temple of Zeus through a colossal gate," she said.

The Temple of Zeus was the first of the magnificent structures built in Aizanoi's city center on the west bank of the Penkalas river (now known as Kocacay).

Erdinc said that excavations in the agora started for the first time this year led to the discovery of important ancient historical links.

She said the area will attract more tourists once excavations are complete.

Located some 57 kilometers (35.4 miles) away from Kütahya center, the city of Aizanoi had attained the place of a religious center under Roman Empire in 133 B.C.

But, lost its importance during the early Byzantine period.

The flat area around the Temple of Zeus was transformed into a fortress in the medieval period and was used as a base by the Çavdar Tatars in the 13th century. It was discovered by European travelers in 1824.