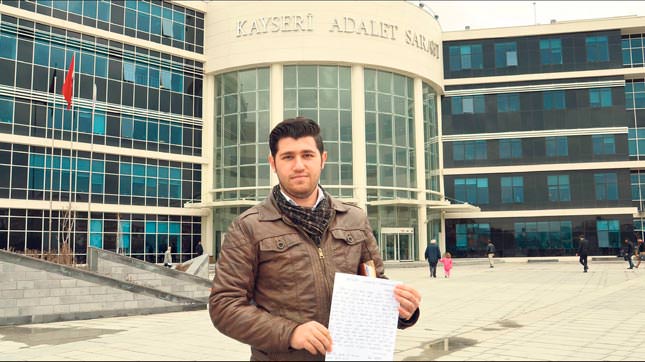 Ömer Koçak, a former follower of the Gülen Movement, claimed Gülenists illegally distributed the questions to a military college entrance exam. His claim comes in the wake of a series of cheating scandals in various exams for law enforcement officials

Ömer Koçak, who supervised a dormitory for students loyal to the Gülen Movement, lodged a complaint in court claiming questions to a military college entrance exam were delivered to the students staying at a dormitory in the central Turkish province of Kayseri in 2013. Koçak, a senior student at Erciyes University's Department of History, was staying at a flat in Kayseri's Melikgazi district allocated as a dormitory for students affiliated with the Gülen Movement about two years ago. "I was staying with my family," he said. "I decided to join the movement to help people and moved into one of their houses. They asked me to help three secondary school students studying for military college exams. Some of them were reluctant to attend the military college. We had them watch documentaries and movies about the military to encourage them. One day before the exam, others in the house photocopied some questions. Then, they took younger students to some place I don't know. I later found out the questions indeed were the military high school exam questions. I also found out the students were brought to another house to memorize the questions. Both those students and student supervisors like myself later confirmed this."

Koçak said two out of three students he helped study for the exam passed the exam but failed in interviews for admission to the school. "The other student who failed in the exam told me he could not memorize the questions," he said. When he found out about the cheating, Koçak spoke to a senior supervisor. "He told me that we should defeat our enemies with their own weapons," Koçak said. After realizing the cheating, Koçak left the movement and moved out of the dormitory.
Elaborating on student dormitories, Koçak said there were seven houses close to the one at which he stayed and were run by university students who used code names.

He later spoke to the students who passed the exams. "They told me the 80 questions delivered to them were the very same questions they saw in the exam," he said.

Koçak was disappointed of the movement after the cheating surfaced. "I was serving them with selfless devotion. In fact, they were merely cheaters. I felt remorse and confessed everything to the court," he said.

The Gülen Movement, a powerful organization led by Fethullah Gülen, an imam living in self-imposed exile in the United States, is accused of running a parallel organization within the Turkish state. The organization is blamed for the Dec. 17 coup attempt which sought to discredit the government through investigations targeting people close to the government. The movement, which acquired clout in law enforcement, judiciary and various government agencies over the years, also faces allegations of cheating in other exams.
Those include exams for promotion to a higher rank in police force and exams for the post of associate professor at universities.

The movement is also accused of infiltrating top scientific and education bodies. The Scientific and Technological Research Council of Turkey (TÜBİTAK), whose personnel are appointed expert witnesses for important court cases, was also allegedly infiltrated by Gülenists. Through TÜBİTAK, they allegedly sought to undermine cases or produce forged evidence. After it was revealed earlier this week that the prime minister's private conversations were wiretapped, an investigation was launched. Five officials at TÜBİTAK were suspended over illegal wiretapping by modifying software used for encrypting phone conversations of the government officials.