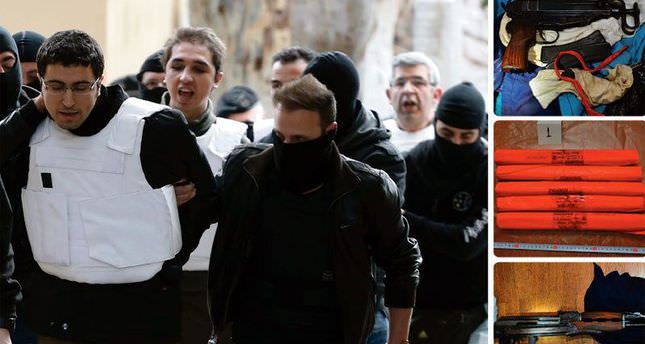 ISTANBUL — The Thessaloniki Court of Appeals on Wednesday ruled Hüseyin Fevzi Tekin who was arrested last February will not be extradited to Turkey at least until his political asylum request is concluded.

Tekin, along with Revolutionary People's Liberation Party-Front (DHKP-C) members İsmail Akkol, Murat Korkut and Bilgehan Karpat, was arrested in Athens. When captured, he was in possession of a passport issued in the name of Bulgarian national Petrov Petar.

Greek police found a cache of weapons and explosives in his house. The court said that Tekin will remain in detention on charges related to the possession of weapons.

In a related development, Hasan Koşar, a DHKP-C member recently arrested for his involvement in a 2011 bombing in Thessaloniki, was released on bail. Koşar and 14 others, including two other DHKP-C members, were arrested after the explosion that killed one. He was released only to be arrested again as further investigation found he was involved in the attack. The Thessaloniki court ruled for his release as he has been a resident of Greece for over 23 years and "was not expected to flee abroad."

Last week, the Thessaloniki Court of Appeals rejected an extradition demand for Kadir Kaya, another DHKP-C member, who was jailed last year but freed. The court also decided not to extradite two other DHKP-C members who were captured in a boat carrying arms and explosives from Greece's Chios island on July 30.

Tekin is a high-ranking official in the DHKP-C who rose to the top after the death of its leader Dursun Karataş in 2008. He was arrested after a series of bombings were carried out in Istanbul's Fatih district in 1999. After his release on parole, he disappeared. He is accused of commanding the organization from Greece.

Greece has long been a favorite hideaway for terrorists from the DHKP-C and PKK.

Terrorists fleeing Turkey took shelter at refugee camps in Lavrion under the guise of asylum seekers, especially in the 1980s.

The DHKP-C, founded in 1978 as a Marxist-Leninist party, was designated a terrorist organization by Turkey, the United States and the European Union. Under the name of Dev Sol until 1994, the organization claimed responsibility for a series of high-profile murders, including the assassination of nationalist politician Gün Sazak and former prime minister Nihat Erim in 1980. The group also killed several Turkish intelligence officials. In 1994, it was founded as the DHKP-C after Dev Sol splintered. The group's terror activities remained relatively minor compared to the PKK, another terrorist organization targeting Turkey.

The DHKP-C attempted to stage a bloody comeback in the last two years by carrying out attacks against the police. In 2012, about ten years after its last known lethal attack in Turkey, the DHKP-C conducted a suicide bombing at a police station in Istanbul, killing a policeman.

It claimed responsibility for a suicide bombing at the U.S. Embassy in Ankara, which killed a Turkish security guard in February 2013. This was followed one month later by rocket attacks against the Ministry of Justice in Ankara and the headquarters of the ruling AK Party. In September 2013, the DHKP-C claimed responsibility for a rocket attack against the headquarters of Turkish police in the capital.

No casualties were reported in all three attacks. The DHKP-C, originally established as a left-wing movement opposed to "fascist regimes in Turkey controlled by the West" targeted U.S. interests, including U.S. military and diplomatic personnel and facilities and NATO personnel and facilities since the 1990s. During the Gulf War in 1991, the organization claimed responsibility for the killing of two U.S. soldiers in Turkey and targeted NATO and U.S. logistical facilities in various attacks.

Following those attacks, Turkey launched a massive crackdown against the group in 1992 and an unknown number of its senior leaders were killed in operations in Istanbul. The terrorist organization restricted its activities in late 1990s, although it made headlines after a series of hunger strikes by its imprisoned members in 1999 that concluded with a violent crackdown by Turkish security forces against the prisoners. The group changed its tactics in the subsequent years, using terminally ill people as suicide bombers.
Last Update: Apr 18, 2014 10:21 am