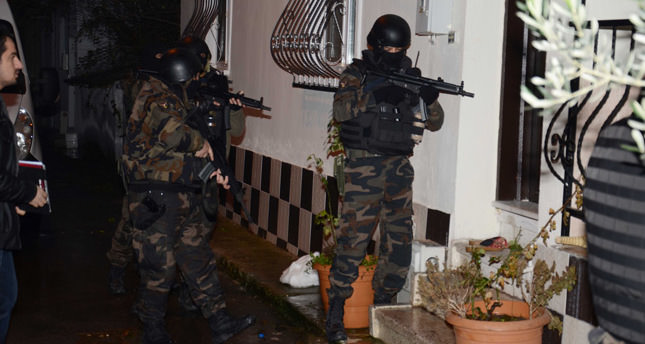 by AA Aug 09, 2014 12:00 am
Police forces in Istanbul and nearby cities have launched drug raids, detaining dozens and seizing large amounts of drugs and chemicals on Thursday and Friday to abate the rising use of synthetic drugs.

Hundreds of Istanbul police made raids in several districts of Istanbul aided with the assistance of helicopters.

In Ümraniye, on Istanbul's Asian side, more than 10 people were detained Friday in 12 different raids by 400 police officers.

On Thursday, in Kartal, more than 500 counter-narcotics and riot police busted into 20 houses and captured large amounts of weed and synthetic cannabis - a cheap, addictive and potent form of marijuana, known as "bonzai."

Meanwhile on Istanbul's west side in Zeytinburnu and Fatih, more than five kilograms of drugs and nearly 9,000 ecstasy pills were seized by police forces in operations which saw nine people detained.

Turkish authorities escalated the fight against the notorious bonzai drug, from which at least 20 people have died in the last four months.
According to a report by an opposition parliamentarian from the CHP, seizures of bonzai in 2011 to 2013 increased eight-fold as the substance is cheap and has become easy to access in recent years.
Last Update: Aug 09, 2014 10:14 am
RELATED TOPICS