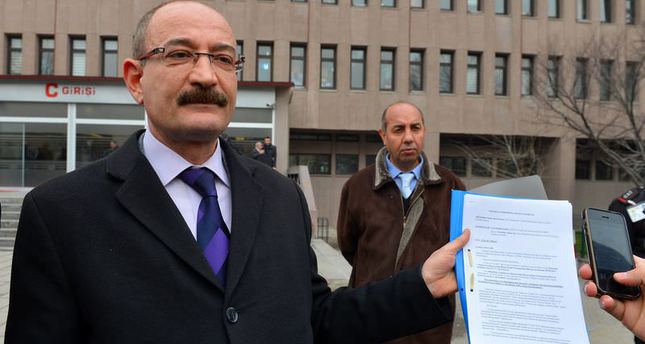 Akşam daily journalist Emin Pazarcı, filed a complaint against Fethullah Gülen and his lawyer on Friday on allegations that he has been subject to a defamation campaign by Gülenists for years.

Pazarcı claims that the Gülenists have been suing every piece of his writing, but every trial has been concluded with the verdict of non-prosecution. According to him, this exposes the two-facedness of Gülenists, who say there should be freedom of expression in press.

Pazar made the comments during a press conference he held in front of the chief public prosecutor's office in Ankara.

"(Fethullah) Gülen sues anyone who writes about himself or parallel structure. And I am one of those people," Pazarcı said.

Pazarcı's two articles have been sued by the Gülenists, under allegations of "slandering" and "insulting" Fethullah Gülen, both of which have been later on acquitted. Pazarcı said at Friday's press conference that he had not mentioned Fethullah Gülen by name in either of the articles, and had not used any phrase that could "legally victimize" the plaintiffs.

The fact that his articles have been sued is an example of Gülenists' two-facedness, according to Pazarcı. "Those who talk about 'A blow to the free press' have actually tried to hinder many from writing about them," he said.

"I have been acquitted, and now I'll file a complaint against them, what will the jurisdiction say?" Pazarcı stated.

After his press conference, Pazarcı handed his petition to the chief public prosecutor's office, on which was written: "The suspects' actions, are not just 'slander' against myself, but also aim at silencing free press."

The Gülen Movement –led by Fethullah Gülen who lives in self-imposed exile in the U.S.– is considered a national threat by the Turkish government. It is accused of wiretapping thousands of people, including senior officials, encrypting phones and infiltrating state institutions with the aim of toppling the government.