The unsuccessful Gülenist of 2009, becomes top-scorer of Public Personnel Exam in 2010 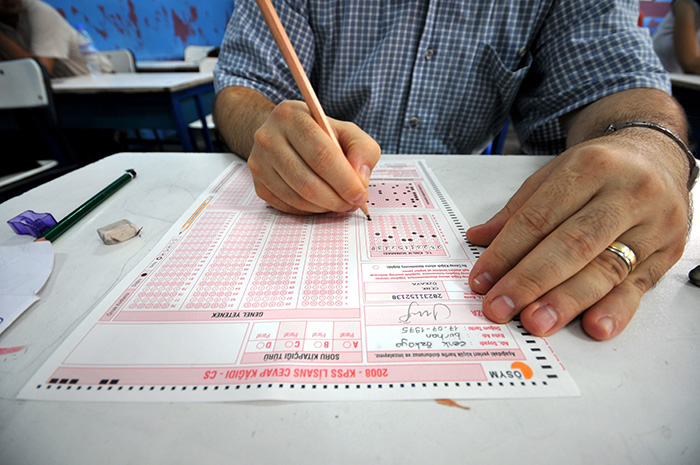 by Daily Sabah Mar 26, 2015 12:00 am
The top scorer of the 2010 Public Personnel Selection Exam (KPSS), Gamze Tembel Eser, has escaped to Italy, after an investigation into the cheating allegations of members of the Gülen Movement during the exam in 2010 was launched in September 2014, Yeni Akit daily has reported.

Eser, who graduated with a food engineering degree from Celal Bayar University in 2003, was unsuccessful in four previous attempts at the KPSS, but after attending a Gülen Movement-run preparatory school, she became the top scorer in the country in 2010.

Eser left the country on Sept. 17, 2014, immediately after the investigation was launched, and has been in Italy for six months for language learning purposes, the report said. Prior to her departure, Eser was employed by the Istanbul Food Control Directorate, an institution that is part of the Food, Agriculture and Livestock Ministry, a place she where had insisted on working after quitting her position in the private sector, where she had been employed for seven years.

The same institution is responsible for inspecting food prepared for Prime Minister Ahmet Davutoğlu and President Recep Tayyip Erdoğan during their time in Istanbul, thus it holds a strategic position. The insistence on working at such a strategically important institution and Eser's surprising success on the 2010 exam after attending a Gülen Movement-run prep school, has raised questions about her relationship with senior members of the movement.

Speaking to Yeni Akit, Eser's father, Şerif Ali Tembel, said that his daughter had had affiliations with the Gülen Movement since she was nine years old, and that after her last exam score, she was insistently steered toward applying to the food inspection institution in Istanbul by the movement. Her father also added that Eser's husband is one of the senior members of the movement.

The Ankara Chief Prosecutor's Office released a statement on March 23 relating to the investigation, saying: "In the history of the KPSS, although no-one has ever previously answered all the 120 questions correctly in the Educational Sciences part of the exam, in 2010, a total of 350 gave correct answers to all 120 questions on the exam."

Out of 350 people, 70 of them are husband and wife, 23 are relatives and 52 have been living in more or less the same district, apartment, address, building complex or street according to the statement. Given these facts, the prosecutor's office suspects that the aforementioned people managed to score full marks on the exam with the assistance of the Gülen Movement, which is being accused of obtaining and providing the questions to the test takers before the exam.

Alluding to the recent cheating scandal, in which members of the Gülen Movement have been implicated, which have already been accused of various offenses including wiretapping high-level officials and infiltrating key state institutions, Prime Minister Ahmet Davutoğlu said it is hard to understand how one could violate people's rights and favor those close, with an aim to control the state where they are placed. "This is what we have been calling the 'parallel structure,' " Davutoğlu was quoted as saying during a speech at the inauguration ceremony of a biotechnology center on Wednesday.

The "parallel structure" is a term coined by government officials to reference members of the Gülen Movement that infiltrated the government by concealing their close relationships with the movement. They have been accused of conducting illegal wiretapping activities and conducting operations against those they consider a threat by exploiting their authority at the Presidency of Telecommunications, the judiciary and police. How they infiltrated these bodies is gradually being uncovered. The latest accusation being leveled at members of the movement is the cheating scandal concerning the KPSS held in 2010.

Davutoğlu said: "We will not let you [the Gülen Movement] establish your own group [in the state]. We respect the authenticity of the knowledge. I felt deep grief as an academic about the cheating scandal. How can a student of a teacher who has received at least a small amount of ethics education do this and come to a rank out of this [cheating]?"
Last Update: Mar 26, 2015 3:58 pm
RELATED TOPICS