Turkey: Defendants in Soma mine trial to appear in person at court after protests 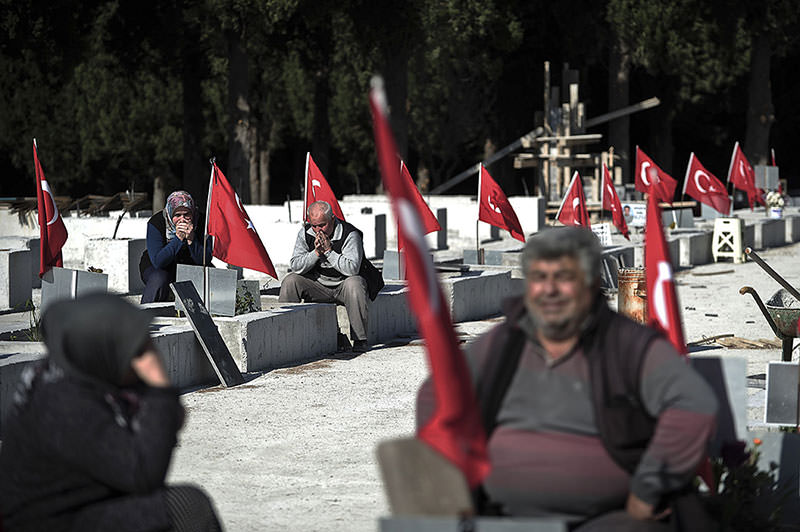 Relatives mourn in front of the tomb of their relatives, miners killed in the worst industrial accident in Turkish history | AFP Photo
by daily sabah Apr 13, 2015 12:00 am
The first hearing of a trial relating to the mining disaster in western Turkey in May 2014 that left 301 miners dead, adjourned until Wednesday after a judge gave in to protests at today's hearing. The defendants in prison who were supposed to address the court in the western province of Manisa will be brought to the courtroom instead of testifying via video-link as was originally planned.

Eight senior officials of the private-run Soma Kömürcülük that operated the mine in the town of Soma are in prison and 37 others were released pending trial. The defendants face charges of murder over the deaths of miners in country's worst mining disaster.

The highly anticipated trial commenced yesterday morning in Akhisar, a town in Manisa some 50 kilometers from the mining site. Grieving families of victims marched to the culture center modified to serve as a courthouse to accommodate the huge number of participants, carrying a large banner with the names of the 301 miners who died. They later streamed into the courthouse along with lawmakers from opposition parties and co-chair of the Peoples' Democratic Party (HDP), Selahattin Demirtaş. Tight security measures and the size of the courthouse prevented relatives of the victims from entering the courtroom, and the protesting families quarreled with police.

Then, another protest erupted over the court's decision to have eight imprisoned defendants testify via video-link from the prison where they are being held in İzmir, a western city near Manisa, on grounds of their security.

The judges ordered a break for the hearing following the protest, and when they came back they ruled to adjourn the hearing until the next day and bring the defendants to the courtroom.

The imprisoned defendants include Can Gürkan, CEO of Soma Kömürcülük and son of Alp Gürkan, the head of Soma Holding of which the company was a subsidiary; and the mine's general manager, Ramazan Doğru. They face charges of killing with eventual intent and inflicting heavy injury. Penalties for which carry up to 25 and six years respectively, but the defendants may be handed down effective life sentences as the charges are separate for each of the 301 miners. The mine's low-level officials also face charges carrying penalties of up to 15 years for their alleged roles in the disaster.

The disaster in Soma, a western coal hub, on May 13, 2014, was initially thought to be a small-scale accident common in the country's mining industry, which has a bad track record concerning accidents. It started when a fire broke out in the mine and soon, miners were trapped underneath between flames and smoke. Those closer to the surface managed to flee to safety, but the bodies of 301 who had died of carbon monoxide poisoning were recovered only after days of recovery efforts.

An investigation found that the privately-run company operating the mine and several other mines in the area was chiefly responsible for the disaster in terms of work safety. The mine apparently lacked carbon monoxide detectors and a good ventilation system. Survival rooms to provide shelter for miners hundreds of meters below the surface in the case of an emergency were also absent. Gürkan and others were rounded up by police and sent to prison soon after the incident.

The disaster brought the lack of work safety standards in the mining sector to attention and the government introduced a set of laws aimed at improving safety in mines as well as working conditions and miners' pay.

Yet months after the Soma disaster, another incident in the central town of Ermenek revealed that work safety standards, or rather, companies complying with them, still had shortcomings. Eighteen workers were killed when floodwaters inundated a coal mine in Ermenek in October. The incident has been blamed on company officials ignoring the risk of flooding.