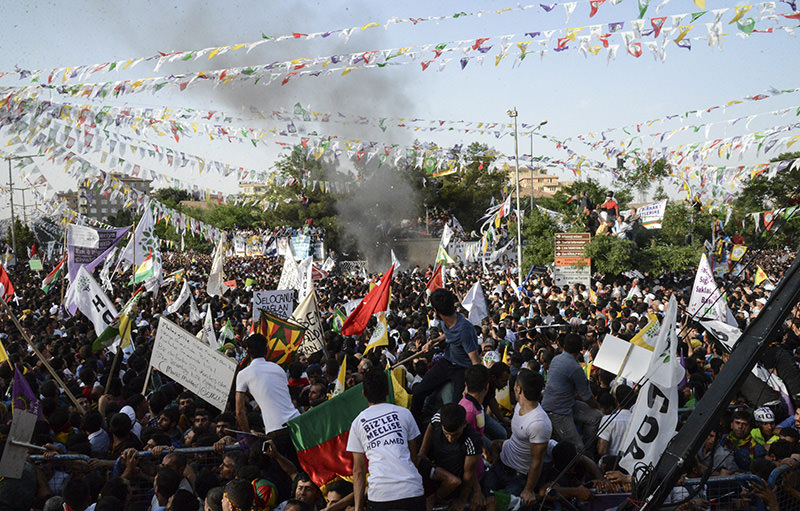 People look at smoke from an explosion which injured several people during a rally by the pro-Kurdish People's Democratic Party (HDP) on June 5, 2015 in Diyarbakir (AFP Photo)
by Anadolu Agency Jun 07, 2015 12:00 am
Turkish Prime Minister Ahmet Davutoğlu has confirmed on Sunday that a suspect has been detained over Friday's deadly bomb attack on the pro-Kurdish Peoples' Democratic Party (HDP) rally.

Speaking in central Anatolian province of Konya while voting in Sunday's Turkish general election, Davutoğlu confirmed that one person had been apprehended on Saturday night in relation to deadly explosions which struck the opposition party's rally in the south-eastern province of Diyarbakir.

Speaking to the press after casting his vote, Davutoğlu said: "We cannot reveal [the suspect's] name at the moment for the sake of the investigation's security."

"We will get to the root of it. Whoever has done this, it is an attack on democracy," Davutoğlu added.

Diyarbakır Governor Hüseyin Aksoy also confirmed the arrest. "The suspect was detained in the southern province of Gaziantep and taken to Diyarbakir," he said after he voted.

According to the governorate, Diyarbakır chief public prosecutor's office has been carrying out the investigation.

The suspect reportedly has links with the extreme left Revolutionary People's Salvation Party-Front (DHKP-C), while the police also seek two other people who had connections with the suspect whose images were captured by surveillance cameras. The links between the bombings in HDP's Mersin and Adana provincial headquarters with the attack in Diyarbakır are also being investigated.

The run-up to Turkey's general election has been marred by violence with bombings, shootings, knife attacks and clashes between rival supporters and police hitting the headlines.

Friday's attack in Diyarbakır came two days before Turks go to the polls in a general election where the HDP could enter parliament for the first time.

Davutoğlu said that Turkish security forces were working to find the perpetrators and that the attack was against Turkey as well as the ruling Justice and Development (AK) Party.

"This is a dirty hand. The perpetrators didn't target a party but all [parties], AK Party too."

"Every precaution has been taken," he added.

The prime minister said Sunday was an important day that will "determine the fate of the country," adding: "It is a civic responsibility for everyone to vote and express their opinion about the future of Turkey with their free will."

Davutoğlu did not give any information about a possible connection between the suspect and any terrorist organization.