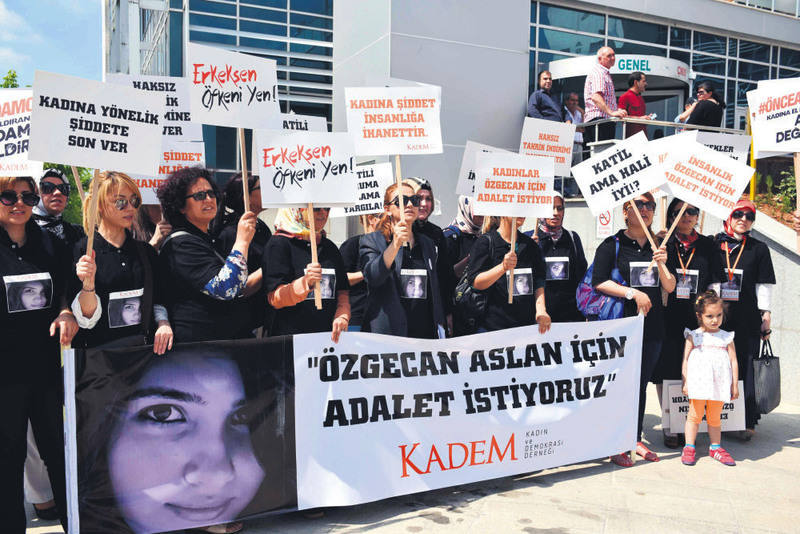 Activists from the NGO KADEM holding a banner reading ,Justice For u00d6zgecan, with a photo of the slain woman. It is a high-profile trial as the murder had triggered nationwide protests against violence targeting women.
by Daily Sabah with Agencies Jun 12, 2015 12:00 am

The trial of three men accused of the murder and attempted rape of Özgecan Aslan, 20, who became a symbol of the fight against violence on women, opened on Friday. The main suspect heaped blame on an accomplice in the first hearing, while a group of women harassed members of a women's NGO outside the courthouse

The trial over the murder of Özgecan Aslan, whose smiling photo became an icon for campaigners in the fight against violence targeting women, opened on Friday. The defendant accused of killing Aslan claimed he acted in self-defense and Aslan's death was an accident, while alleging that his accomplice raped the 20-year-old university student. The much-anticipated trial, closely monitored by nongovernmental organizations (NGOs) campaigning against the murder of women, was also the scene of an unexpected assault.

A group of women calling themselves activists from women's NGOs, harassed and attempted to assail another group from a women's rights NGO.

Three suspects, including a father and son, went on trial on Friday in southern Turkey's Tarsus over the attempted rape and murder of Özgecan Aslan, 20. Aslan was killed in a secluded area in the Mersin province while she was returning home from university on a minibus in February. Ahmet Suphi Altındöken, the minibus driver, was charged with murder and attempted rape, while his father, Necmettin Altındöken, and his friend, Fatih Gökçe, face charges of aiding and abetting him to dispose Aslan's body.

The hearing was held at a courthouse closed for the hearing throughout the day. A large crowd of activists from various NGOs, dozens of lawyers and the uncle of the victim attended the hearing. Aslan's parents were absent.

Altındöken, 26, was the first to appear before the court. He told the court Aslan boarded his minibus and offered him TL 100 ($36.81) to skip minibus stops on her ride home. "I drove to the highway. She got angry, asked me why I took this road and hit me on the back of my head. She then pulled my hair. I got angry too and told her to get off. When she did not, I stopped the minibus and approached her. She started scratching my face and I pushed her; she fell. It was an accident," he said.

Altındöken said he first thought to take her to the hospital but then changed his mind and called his father Necmettin and his friend Fatih. The defendant said he cleaned the blood stains in the minibus. "I then saw Fatih buckling his belt and zipping up his trousers. He did not say anything, and when I pressed him, he threatened to tell police what I did," Altındöken said, implying Gökçe raped the victim.

He added that Gökçe motivated him to kill Aslan, who was lying unconscious in the minibus. Altındöken said he cut off Aslan's hands to prevent her from being identified and said they decided to burn her body later. The defendant often burst into tears as he relayed the details of the murder while the chief judge told him "to stop crying."

As the trial got underway, a scuffle broke out outside the courthouse. Members of several groups also campaigning for women's rights picketed the press conference that was being held by another NGO they apparently considered as a rival. The NGO in question was the Women and Democracy Association (KADEM), a movement advocating women's rights that was protesting the murder. Riot police stopped the harassers as they approached KADEM members. KADEM President Sare Aydın Yılmaz told Anadolu Agency (AA) that she could not comprehend the motive of those picketing their press conference. "They are purportedly here to fight violence against women, yet they attempt to force fellow women activists to leave," Yılmaz said. "They may not like our views, but they have no right to evict us from here," she added.

The three suspects face an aggravated life sentence in prison, the highest sentence in the Turkish penal system, if found guilty. Altındöken is accused of driving the victim to a secluded area after the other passengers on the minibus got off and attempted to rape her. When she tried to fend off her assailant, she was bludgeoned and stabbed. The three suspects then burned the body after cutting off her hands, which were found hidden in Altındöken's house after the murder.

After the hearing, the court adjourned the murder case and ruled that the three defendants in the case would continue to stay in prison until the next hearing on September 9.

Aslan's murder sparked public outrage in Turkey against violence against women, and thousands took to the streets to denounce the killing and to call on the government to implement tougher sentences for suspects in the murder and rape of women.

Although the high-profile trial is expected to produce a ruling with a tough sentence, there were concerns that the suspects may benefit from a reduced sentence. Perpetrators of violence against women occasionally receive reduced sentences through the controversial "unjust provocation" clause in the laws or the defendants' "good conduct" before the court. Unjust provocation refers to women angering the perpetrators by telling them they were cheating on them, an interpretation of the law that draws the anger of women's rights advocates. In Aslan's case, the defendant's claim that the victim provoked him by hitting him may pave the way for a reduced sentence. However, according to Alpay Antmen, head of the Mersin Bar Association, a reduction, especially in terms of good conduct in the court, is out of question. Antmen told AA a number of factors ruled out the possibility of a reduced sentence. "The way the crime was committed challenges it. The suspects committed multiple crimes over a period of time and did not regret their actions," he said.

Fatih Gökçe told the court that Necmettin Altındöken gave his son a knife to cut off victim's hands and denied charges that he burned the body. Gökçe also told the court he believed Suphi Altındöken raped Özgecan. "Of course, he did," he said.
Last Update: Jun 13, 2015 1:46 am
RELATED TOPICS