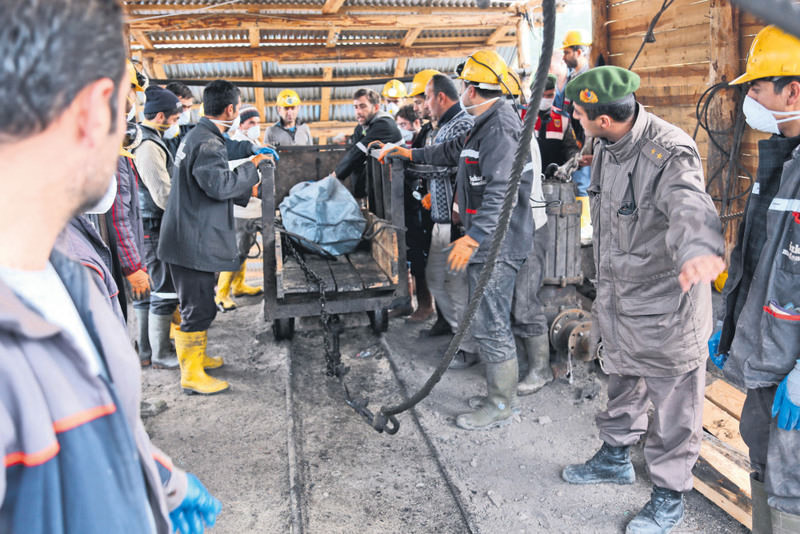 Workers pull a cart with the body of a miner in November 2014 in Ermenek. Eighteen miners were killed when their mine was flooded, allegedly due to deliberate ignorance of the mine owner.
by Daily Sabah Jun 15, 2015 12:00 am

Dozens went on trial yesterday in Soma and Ermenek, two towns that share the fate of being the locations of two lethal mining disasters that killed 319 people in total last year

In a tragic coincidence for families of victims, executives and personnel from two mining companies went on trial yesterday for last year's mining disasters that left 319 people dead in western and central Turkey. The defendants are accused of work safety negligence that is presumed to have caused the miners' deaths.

In Ermenek, a central town in Karaman province, 16 defendants, including three in detention, appeared before a court amid an outburst of anger by some victims' families who repeatedly shouted "killers" and attempted to assault the defendants while one relative of a deceased miner hit a defendant with his cane as the defendant was leaving the courtroom. Other families fought back tears as they waited the start of the first hearing of the trial of the defendants culpability in the deaths of 18 miners who were trapped in a privately run mine that flooded in October 2014. It took one month for their bodies to be recovered.

Three of the imprisoned defendants include mine owner Saffet Uyar, mining permit holder Abdullah Özbey and mining engineer Ali Kurt. These three along with 13 other personnel and executives who were released pending trial face charges of causing multiple deaths through criminally negligent manslaughter.

According to the indictment that includes an expert report on the cause of the incident, work safety standards and inspections of the coal mine had a number of shortcomings. The document says that the miners knew the location of emergency exits but were panicking due to a "lack of safety drills."

Victims were trapped hundreds of meters below the surface when a sudden flow of water from an old, adjacent mine quickly inundated the galleries and led to an accumulation of coal, slime and debris that blocked their movement. According to the report, water that had accumulated in an underground reservoir burst into the mine as a result of the mining company leaving less space than was required between the old and new mines. Some workers in the mine have said the company ignored complaints of water leaking from cracks days before the disaster and that they continued production for the sake of boosting profits instead of heeding calls for worker safety. The mining company played down the small water leaks, according to the report.

Meanwhile, the second hearing of the trial in the country's worst mining disaster, which killed 301 miners in the western town of Soma, was adjourned to today with the court accepting objections over the neutrality of the defendants' lawyers. Lawyers for victims' families had claimed a conflict of interest, as some of the lawyers appointed for the defendants were also in charge of mine safety. In yesterday's hearing, two low-level staff of the mine testified. One of them, a safety inspector for the private company running the mine, said he did not encounter a dangerously high level of carbon monoxide during his tenure in the mine as claimed. The other defendant, a technician, said the management did not force workers to boost production as claimed, but he also acknowledged that no emergency safety drills had been conducted.

In the Soma case, eight imprisoned defendants, including the mine's manager and the CEO of the company running the mine, face life sentences on charges of killing with eventual intent and inflicting heavy injury. Thirty-seven staff members, including work safety inspectors, were released pending trial. They face lesser sentences.
Last Update: Jun 15, 2015 10:21 pm
RELATED TOPICS