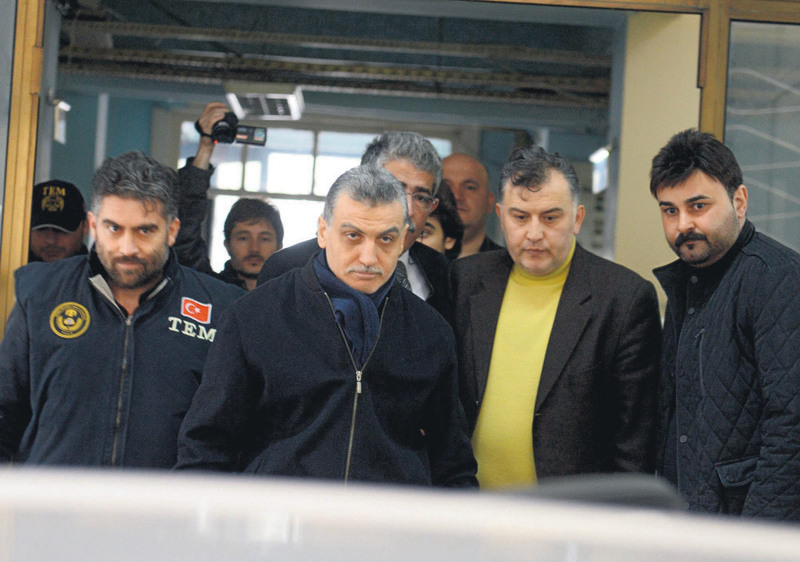 Hidayet Karaca (C), CEO of the Samanyolu media group, was arrested last year on charges of membership to a criminal organization and spreading propaganda for that organization by broadcasting TV shows defaming Tahu015fiyeciler.
by Daily Sabah Jun 17, 2015 12:00 am

The prosecutor's office issued detention warrants for officers in 15 cities over a police operation in 2009 that led to the detentions of several members of the Tahşiye group. The officers are accused of planting grenades in the residences of Tahşiye members to bring charges of terrorism against them. Nine police officers remain at large.

The Istanbul Chief Prosecutor's Office launched an operation against the "parallel structure," a name given to infiltrators from the Gülen Movement in the police and judiciary, following a complaint lodged by Mehmet Nuri Turan, a publisher who claimed he was imprisoned for more than a year over fabricated evidence. Turan was the owner of the Tahşiye publishing house, which was linked to the Nur Movement, whose members include a prominent Islamic scholar who was detained along with Turan, allegedly by Gülenist police officers. Thirty-one people were detained over the complaint and four were arrested. Detainees included senior officials of Gülenist media outlets, which are accused of carrying out a defamation campaign against the Tahşiye group and a former police chief at the counter-terrorism unit of the Turkish National Police. Hidayet Karaca, head of a media conglomerate linked to the Gülen Movement, is among those remaining in detention. Gülen faces an arrest warrant in the case. Several top police officers including former head of the Istanbul police counter-terrorism unit and intelligence unit Ali Fuat Yılmazer, imprisoned in other cases related to illegal wiretapping by Gülenist police officers, are also implicated in the Tahşiye case.

The Tahşiye group was only one of many targeted by the Gülen Movement, which is accused of imprisoning its critics through fabricated evidence or blackmailing people to do their bidding. The case reportedly started after Gülen denounced the group known for its firm opposition to the Gülenists, in a 2009 speech. Following his speech, Gülenist media outlets launched a campaign against the group, claiming it was tied to al-Qaeda.

Turkish news agencies have reported that two police officers among those with detention warrants issued yesterday were officers whose fingerprints were found on grenades captured in the residences of people rounded up in the Tahşiyeciler case.

The Gülen Movement, originally a religious movement with a global network of schools and a large following, emerged as a heavily politicized movement in recent years. It is accused of operating a criminal gang involved in illegal wiretapping of statesmen, businessmen, journalists and hundreds of others.
Last Update: Jun 17, 2015 11:02 pm
RELATED TOPICS