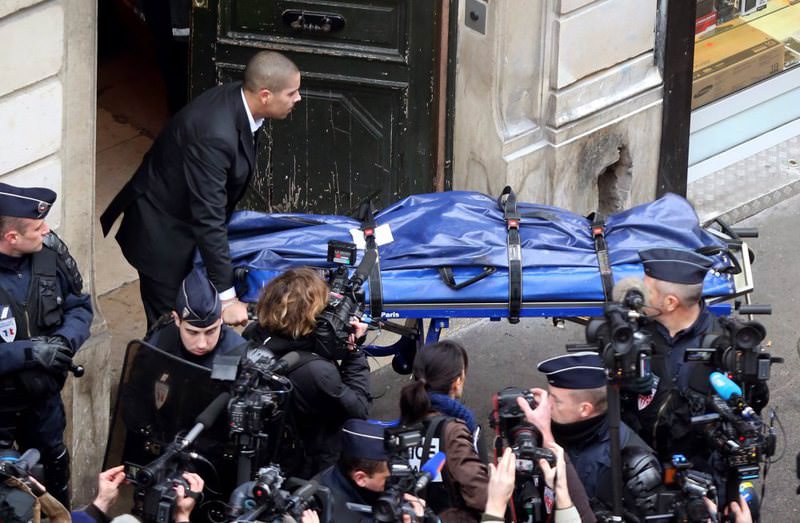 The body of one of the victims in the 2013 attack that killed three women being carried from the offices of the Kurdish Information Bureau in Paris.
by Daily Sabah Jul 27, 2015 12:00 am

French authorities say there was no tangible evidence linking a man convicted for the murders of three PKK members two years ago to Turkish intelligence as previously claimed.

Turkey has earlier denied the allegation and it also refutes France's claim that it was uncooperative in the investigation into the killings of three members of the PKK two years ago.

A prosecutor's office in Paris wrapped up an indictment on the murder of Sakine Cansız, Fidan Doğan and Leyla Söylemez, three members of the PKK, in a building in Paris in January 2013.

A French newspaper had claimed that the indictment pointed to a connection between Ömer Güney, the Turkish suspect convicted of the murders in the office of a PKK-linked institution and Turkey's National Intelligence Organization (MİT). A spokeswoman for the prosecutor's office said there was no concrete evidence linking Güney to MİT, while Turkey refuted the claims and said that a secret voice recording between Güney and a MİT official was fabricated, citing that it was not Güney speaking to the alleged MİT official on the phone.

Turkey also denies France's allegation that Turkey did not cooperate in the investigation. Sabah newspaper quoted Turkish officials that they sent "three folders full of documents" regarding Güney and asked several times for cooperation, but French authorities rejected it.

Cansız, one of the co-founders of the PKK, was killed on Jan. 9, 2013 along with two other PKK members at an institution linked to the terrorist organization. Güney, a 33-year-old man linked to the PKK, was arrested for the three murders. The murders are believed to be the result of infighting in the organization. However, allegations that Güney was directed by MİT found their way into the indictment. Speaking to Anadolu Agency (AA), Agnes Thibault-Lecuivre, a spokeswoman for the Paris prosecutor's office, said they had information that MİT may have helped Güney, but they had no concrete evidence. She said the Turkish judiciary refused to provide them with information about Güney's contacts in Turkey and the legal process was hindered because Turkey did not share information.

Sabah reported that Turkey sent three folders regarding the case and asked to help French authorities with the investigation four times, but France did not reply, quoting Turkish sources. The newspaper also reported that the voice in an alleged recording of a phone call between Güney and a MİT official was not Güney's, according to a forensics analysis of the recording leaked online.

The three folders Turkey sent to France include the identities of Güney's contacts in Turkey and intelligence regarding his phone calls while he was in Turkey.

French newspaper Le Monde reported that the prosecutors were investigating the claim that Turkish intelligence officials may have been involved with Güney "without the knowledge of their superiors to harm the image of MİT and the reconciliation process - the government-sponsored initiative to end the PKK terrorism."

Güney was also in contact with someone in Germany who French authorities suspect of being instrumental in the attack. Soren Seelow, a French journalist covering the case, told AA that this person, who Germany did not allow to be interviewed, might be connected to German intelligence.
Last Update: Jul 27, 2015 1:27 am
RELATED TOPICS