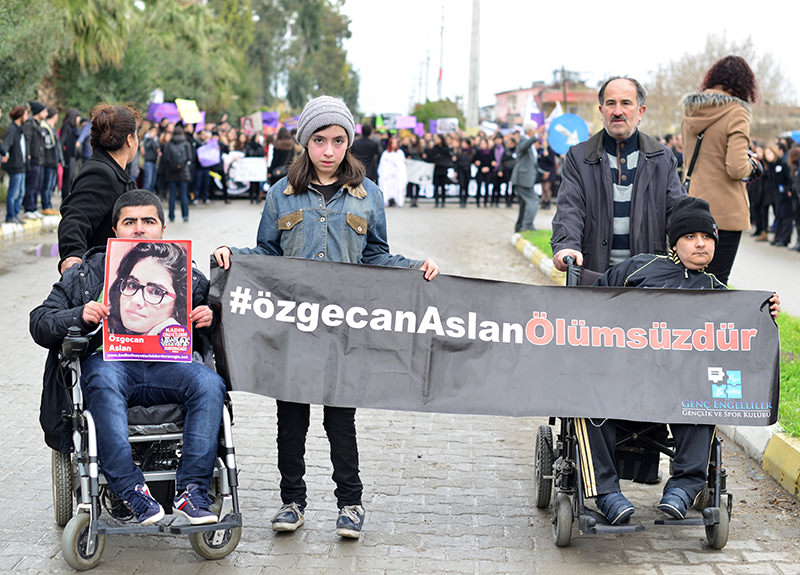 The second hearing of a trial on the murder of Özgecan Aslan, a young woman who became a symbol of the fight against violence toward women, was held on Wednesday. Activists and the prosecutor asked the court to punish three defendants with aggravated life sentence

Three defendants accused of the rape and murder of Özgecan Aslan, 20, appeared before a Turkish court on Wednesday for the second hearing of their trial. The trial's prosecutor asked the court to hand down aggravated life sentences to the trio, who include a father and son, and not to add any likely reduction to the sentences.

Aslan, who was murdered in Mersin after getting into the passenger minibus operated by one of the defendants, inspired outrage over violence targeting women in the country. A group of activists from a leading women's NGO that monitors the legal process in Turkey echoed the prosecutor's demand and called for the heaviest sentence available for Ahmet Suphi Altındöken and his father, Necmettin, and friend, Fatih Gökçe.

The defendants, who have been held in jail since the discovery of the mutilated and charred body of Aslan in a secluded area in Mersin, blamed each other as they did in the first hearing held in June. Seeking a reduction in their sentences, the defendants, who appeared at the courtroom via video stream from the prison, rejected accusations of rape.

The prosecutor, citing "public outrage" over the crime, asked the court to impose the maximum sentence, without reduction, for the defendants. Mehmet Dilan requested Suphi Altındöken be sentenced for the attempt of rape and abduction, and his friend Fatih Gökçe for sexual assault as well as murder.

The court approved their request to appear before the court personally and the three will appear in the courtroom together on Dec. 3. 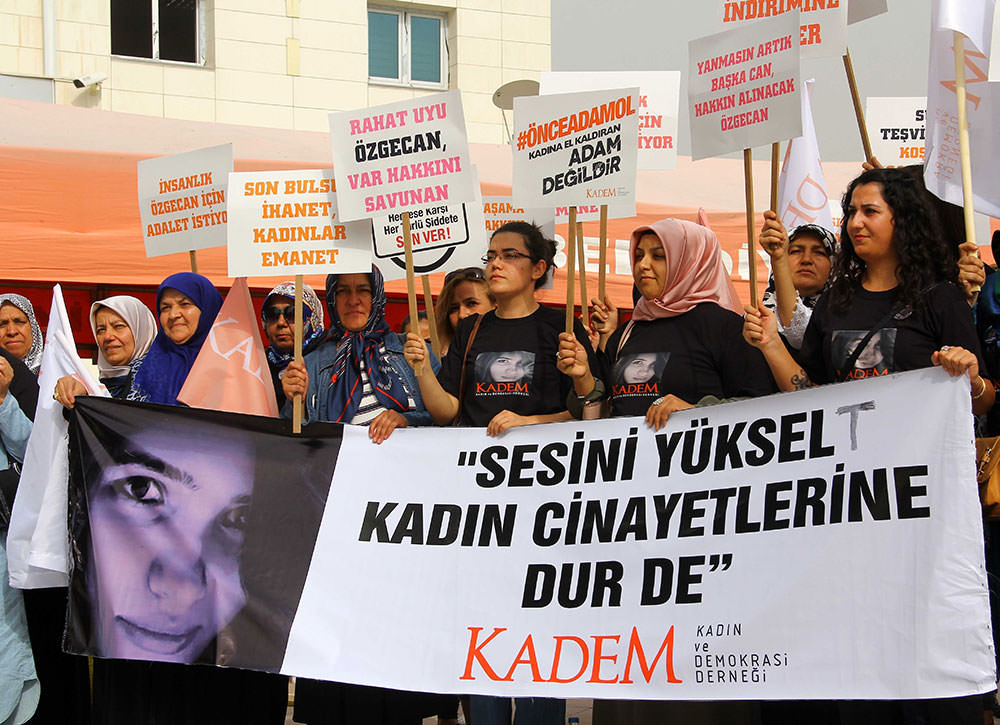 Sare Aydın Yılmaz, head of the Women and Democracy Association (KADEM), went to Mersin to observe the trial and told reporters outside the courthouse that the verdict will set an important precedent. "We ask the judiciary to impose the heaviest sentence and not give defendants any reduction in their sentences, so that the faith of the public will be restored and family of Özgecan Aslan will receive justice," Yılmaz said. She stated they would monitor every detail of the trial and would continue giving moral support to the family of the young woman.

Yılmaz advocated against judiciary decisions on murders targeting women which show more leniency toward male perpetrators during sentencing. She said Turkey should loudly protest violence against women, discrimination and judiciary verdicts benefiting male perpetrators. "KADEM had already presented a set of proposals for a fair punishment of perpetrators of violence against women and easing the legal burden for victims. We repeatedly emphasized an efficient and fair trial. The Özgecan Aslan trial will set an example in Turkey for the handling of issues related to violence and the legal process," she stated.

She said the "Özgecan bill," asking for a government pledge to increase the punishment for violent crimes against women, should be implemented as soon as possible. "Crimes against women should be punished with the heaviest sentences whereas lighter sentences should be stopped. Judiciary mechanisms should be restructured to prevent shortcomings in punishment of such crimes from occurring in the future, and courts specialized in handling violence targeting women should be established," Yılmaz said.

The Ministry of Family and Social Policies drafted a set of regulations to amend a controversial law in the Turkish Penal Code that favors a reduction in sentences.

The abolition of the reduction covers crimes such as murder, rape and domestic violence that targets both women and children.

If enacted, the regulations may prevent a repeat of cases in which convicts, some sentenced to life, are eligible for lighter sentences if courts rule they exhibited "good behavior" during the trial or if the murdered cheating spouses "unjustly provoked them." For instance, a convict charged with the rape of a 70-year-old paralyzed and blind woman in the city of Diyarbakır got away with eight years when the court ruled he was well-mannered during the hearings.

A husband who ran over and killed the wife he divorced after stabbing her eight times had his sentence reduced to 18 years from life, as the murder occurred after the wife confessed she conceived the couple's two children with a man she cheated on him with. The justification was that the ex-wife "provoked" the man by making that confession.