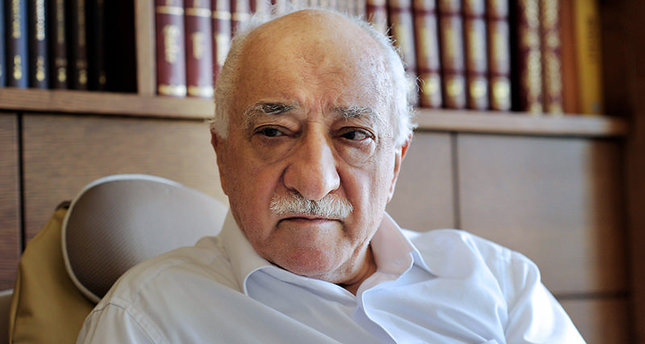 by daily sabah
Oct 01, 2015 12:00 am
Controversial cleric Fethullah Gülen faces a life sentence as prosecutors yesterday presented an indictment charging Gülen and 67 others with an attempt to overthrow the democratically elected government.

A prosecutor from the Chief Prosecutor's Office in Istanbul wrapped up an indictment concerning an operation conducted on Dec. 25, 2013, by prosecutors and police officers linked to the Gülen Movement of the U.S.-based cleric. The Dec. 25 probe, under the guise of an anti-graft operation, had targeted prominent figures, including businesspeople and Bilal Erdoğan, the son of then-prime minister and current President Recep Tayyip Erdoğan, and is largely seen as an alleged attempt to overthrow the government by linking the accused to government members.

The new indictment on the "parallel state structure," a name attributed to infiltrators of the Gülen Movement in key posts in the judiciary and police, accused the 69 suspects of wrongdoings in the Dec. 25 probe and conspiring against those detained in the probe.

Gülen is the prime suspect in the indictment. Among charges he faces are attempting to overthrow the government by force or attempting to prevent the government to fulfill its duties, founding and managing an armed gang, illegally obtaining information related to state security for political and military espionage. Coup attempt and espionage can be punishable with life terms.

The indictment is now awaiting the approval of the chief prosecutor and if approved, it will be sent to the court.

Prosecutors who were accused of illegally conducting the probe were already suspended from duty. Yesterday's indictment also implicates top police officers linked to the Gülen Movement who played key roles in the Dec. 25 probe, which had come eight days after another probe by Gülenist prosecutors. In September, Mehmet Yüzgeç, a prosecutor involved in both probes, was detained. Yüzgeç, Zekeriya Öz and Celal Kara, two other former prosecutors linked to the Gülen Movement, were earlier suspended from duty. Öz and Kara remain at large.