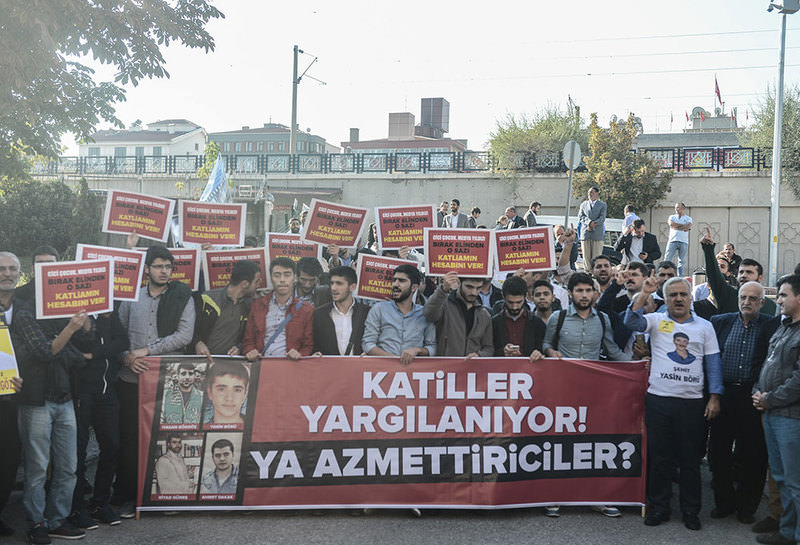 Yasin Börü was remembered on Monday by activists calling for justice for the 16-year-old Kurdish teenager who was killed by a pro-PKK mob last year in Diyarbakır. The trial of the suspects in his murder, and the killings of three others, began amid an outcry over the PKK's targeting of Kurds

"Justice for Yasin!" activists shouted outside a courthouse in Ankara on Monday as the trial of defendants accused of killing 16-year-old Yasin Börü commenced. The trial of 34 suspects linked to the PKK – which is accused of killing Yasin Börü, 16, and three other young men in the southeastern Turkish city of Diyarbakır last year – started amid demonstrations against the terrorist organization and a remembrance service for Börü, whose death stirred public outrage and became the embodiment of the PKK's indiscriminate attacks targeting the Kurds it claims to be fighting for.

Held in capital Ankara instead of Diyarbakır due to security concerns as the PKK stepped up its attacks in the region recently, the trial opened amid demonstrations from several nongovernmental organizations calling for justice for victims and a deeper inquiry to find the "masterminds" behind the murders. The murders revealed the violent stance of the terrorist organization – which claims to fight for Kurdish self-rule and restoration of their rights – toward Kurds not supporting them. Four young men working for a charity, Yasin Börü, Hasan Gökgöz, Ahmet Hüseyin Dakak and Riyat Güneş, were killed while delivering aid to the poor in Diyarbakır, a predominantly Kurdish southeastern city, on Oct. 7, 2014.

One day before, groups affiliated with the terrorist organization had taken to the streets to protest against what they called Turkey's support for ISIS after the takeover of a Kurdish town in Syria. Börü and his friends were from conservative Kurdish families, a potential target by the PKK which has a mindset of branding Muslim Kurds as ISIS supporters. As they were distributing meat from sacrificial animals to impoverished families, they were interrupted by a pro-PKK mob. The desperate youths, accompanied by a fifth aid worker, took shelter in an apartment building but the mob quickly surrounded the building and attacked the unarmed group. According to reports, Börü, Gökgöz, Dakak and Güneş were viciously beaten, tortured, shot and stabbed before their bodies were thrown off the upper floors of the building. İsmail Er, the fifth victim, managed to flee.

In the first hearing, the court heard the indictment and was expected to hear the testimony of defendants as the news went to print. A large crowd of activists, including representatives of Amnesty International and families of the victims, observed the trial. Activists waved banners reading "Justice for Yasin" and banners with slogans condemning Selahattin Demirtaş, co-chair of People's Democratic Party (HDP). The HDP is accused of instigating riots on Oct. 6-7, 2014 which resulted in the deaths of over 50 people. The court took separate testimonies from some defendants, citing concerns that they felt pressure from the other defendants while five defendants asked for Kurdish translators, saying they did not speak Turkish.

The indictment says victims were attacked by members of the PKK under the pretext that they were members of ISIS and describes chilling details of the attack. According to the indictment, the pro-PKK mob searched all houses in the neighborhood when Börü and others fled after the first attack. After finding them in an apartment, a member of the mob climbed the balcony and started firing inside. Once he entered the apartment, he opened the door to other members of the mob who proceeded to fire on victims and stab them. The three young men were then thrown out the window and another victim was dragged out of the building. The victims, who were heavily injured when they were taken outside, were then beaten with sticks, pelted with stones and kicked. Media reports had stated that the mob ran over the bodies with cars.

The defendants face multiple aggravated life sentences on charges of torturing the victims to death and other terror-related charges.

The PKK, known for the campaign of terrorism it has orchestrated over the past three decades, had renewed its attacks in Turkey in July, ending a three-year break to its lethal attacks. Security sources say at least 35 civilians and 130 security personnel were killed since the PKK started attacks in July, but the death toll may get higher as reports of attacks by the PKK, especially in southeastern Turkey, is almost a daily occurrence nowadays.

Though the terrorist organization claims to target security forces, civilians are also frequent targets of the PKK. According to a report in the state-run Anadolu Agency, more than 6,700 civilians were killed since the PKK launched its terror campaign in 1984. The majority of civilian victims are those living in the predominantly Kurdish southeastern Turkey. Abdurrahim Boynukalın, a lawmaker from the ruling Justice and Development Party (AK Party), was among the politicians watching the trial. Speaking to reporters outside the courthouse, Boynukalın said Yasin Börü was killed at a time when people were embracing those who fled Kobani. "We heeded the drama of our brothers from Kobani but HDP Co-Chairman Selahattin Demirtaş called upon people to take to the streets. Armed gangs incited by the HDP killed our 16-year-old brother Yasin. He was a charitable young man with a heart full of sympathy. He was handing out meat to poor families. He was first stabbed, then had his throat slit and finally he was ran over, in the middle of Diyarbakır. We are here as his brothers and will monitor this trial to ensure his murderers have a fair punishment and we will work to prevent the killing of people like Yasin," he said. Boynukalın said lawyers from his party were observing the trial and pledged to continue a legal struggle against "those resorting to violence while posing as supporters of democracy," in reference to the HDP.