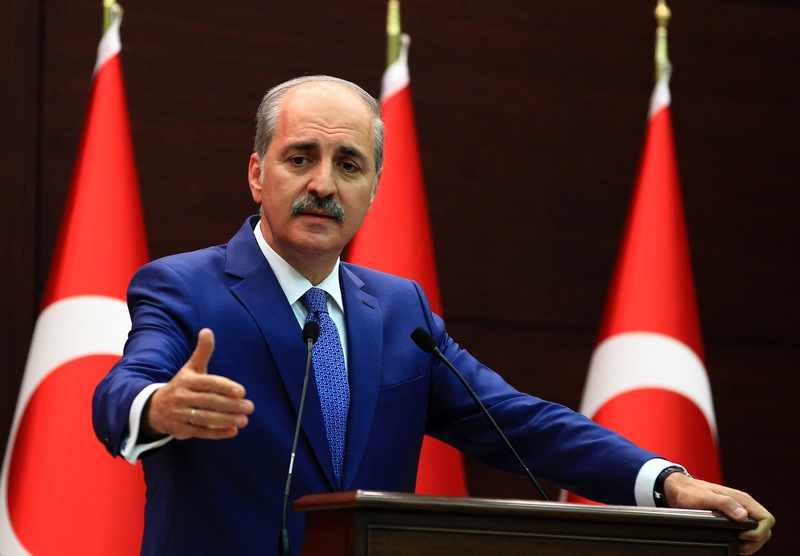 by Daily Sabah with AA
Oct 13, 2015 12:00 am
Turkish Deputy Prime Minister Numan Kurtulmuş said late Monday that the investigation on Saturday's twin bomb blasts in Ankara that killed at least 97 people was "in its final stage and more or less concluded."

"Two suicide bombers carried out the attack, and it is understood that they each used about 5 kilograms TNT explosives," Kurtulmuş also told reporters in Ankara.

The deputy premier did not reveal the gender or identities of the suspects, citing a confidentiality order issued by Ankara's Chief Public Prosecutor.

Earlier Monday, Turkish Prime Minister Ahmet Davutoğlu said that they were close to identifying the two suspected suicide bombers and the organization behind the blasts; with the focus being on ISIS, who were also linked to the Suruc bombing on July 20 that killed 33 people.

Referring to ISIS, the PKK and the leftist Revolutionary People's Liberation Party-Front (DHKP-C) group, Davutoğlu said: "For us, these three organizations are seen as a potential focus for the crime and right from the start, we gave priority to ISIS, considering the method and general trend."

The prime minister added: "We ascertained how these two suicide bombers arrived at the square and how they carried the bomb."
Kurtulmuş reiterated that the way the attack was carried out showed "a resemblance to the Suruç bombing", and said that "a large number of people have been detained in relation to the attack", without giving an exact number of suspects in custody.

Noting that investigators were working in a "very meticulous" manner, and considering "both usual and unusual suspects", he warned against any speculations so that necessary steps could be taken that would "produce results".

Security officials based in the capital -- and who did not wish to be identified -- had told Anadolu Agency earlier on Saturday that the attack was carried out by two suicide bombers using TNT explosives, with metal balls added as high-speed shrapnel.

Saturday's blasts have shaken Turkey as the country faces a general election re-run on Nov. 1, counterterrorism operations in the southeast and an ongoing civil war on its southern border in Syria.
Last Update: Oct 13, 2015 1:06 am