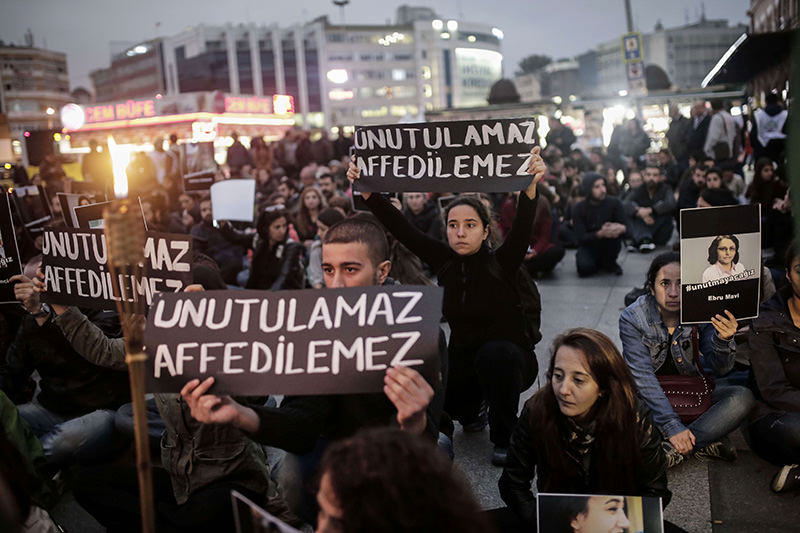 Demonstrators hold pictures of victims and placards reading 'unforgettable, unforgiven' on October 13, 2015 in Istanbul, during a rally to protest Ankara bombing (AFP Photo)
by Anadolu Agency
Oct 15, 2015 12:00 am
Turkey announced Thursday that the beneficiaries of the people who lost their lives in the Ankara bombings will be eligible for a monthly payment of 820 Turkish liras ($283).

According to the Ministry of Labor and Social Security, citizens hurt in the incident will also receive a monthly payment ranging from 497 to 820 Turkish liras ($171 to $283) according to the type and degree of their disabilities .

With legislative regulations from 2012 and 2013, the beneficiaries of the victims of terror attacks and injured civilians are eligible for monthly payments and employment in the public sector.

The twin suicide bombings – the deadliest attack in modern Turkish history – were set off by two suspected suicide attackers in a crowd of leftist, pro-Kurdish and union activists at a peace rally.

The attacks near Ankara's main train station left the bodies of dead demonstrators strewn across the ground. The bombings also wounded over 500 people, dozens of whom were hospitalized and are in intensive care, according to the Prime Ministry.