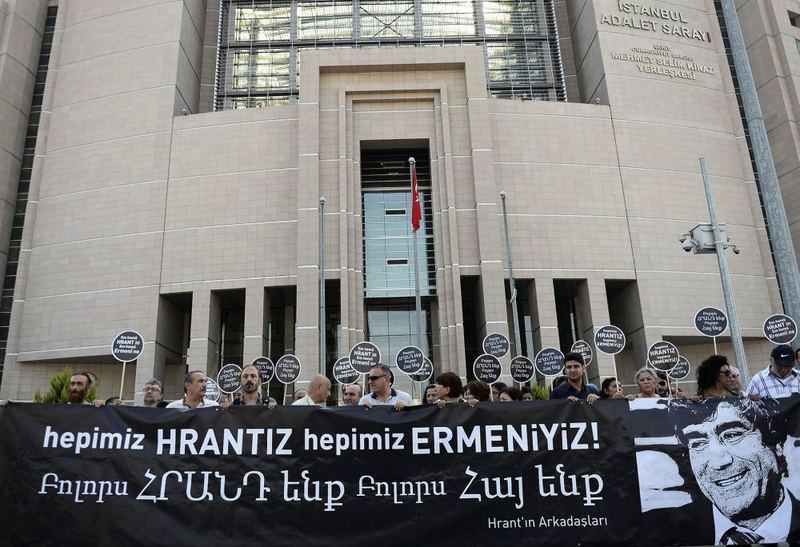 Activists holding a banner with a photo of Dink and a slogan reading ,We are all Hrant, we are all Armenians, outside an Istanbul courthouse where perpetrators of his murder were tried on Sept. 3.
by Nazif Karaman Oct 20, 2015 12:00 am

Intelligence reports hidden from investigators inquiring into the murder of prominent Armenian-Turkish journalist Hrant Dink disclosed a plot to cover up Gülenist involvement in the killing.

Prosecutors investigating the murder found that police chiefs and intelligence officers linked to the Gülen Movement, members of which now face terror charges, deliberately ignored intelligence reports concerning the 2007 murder. Findings show the Gülen Movement, which has been accused of attempting to overthrow the government, aimed to wrongly place the blame on a "a gang" for the murder. The gang in question was Ergenekon, which has seen dozens of military officers, journalists and dignitaries imprisoned in what they termed a Gülenist plot.

The inquiry into the murder, which was initially carried out by prosecutors linked to the Gülen Movement, was restarted last year, and several suspects in the cover-up were detained and interrogated. As the inquiry nears its end, new details in the probe reveal a "parallel structure" operating within the police and courts sought to expand its influence in the police by distorting facts around the murder.

Among the previously hidden intelligence reports is a document presented to prosecutors by Engin Dinç, the police intelligence director in Trabzon at the time of the murder. Trabzon was the hometown of Ogün Samast, the teenager who shot Dink dead outside his newspaper's office in Istanbul. The northern city was also the city where the murder plot was allegedly hatched by a police informant. The report shows a list made before the murder naming Ogün Samast as a potential hitman.

A cover-up regarding the links of officers to the murder has long been suspected by prosecutors. A recent search into the archives of Trabzon's intelligence service revealed some documents which were not, but should have been, entered into the national intelligence database. A document found in the archives contained statements made by Erhan Tuncel, a police informant. According to the recovered document, Tuncel said a new assassin was found to kill Dink and named him as "Ogün." Suspects interviewed by prosecutors said details on the murder plot were not sent to the general directorate of police intelligence in a blatant cover-up.

The investigation also found that Ramazan Akyürek, Trabzon police chief at the time of the murder, ordered the detention of Erhan Tuncel after the murder for 14 hours. Documents suggesting that the officers possessed foreknowledge of the murder were destroyed while Tuncel was in detention.

According to judiciary sources, Akyürek, a suspected Gülenist police chief, pressured the head of the Trabzon intelligence branch not to send information about Tuncel to Istanbul police investigating the murder.

Another allegation accuses officers of creating a plot to remove the head of the Istanbul's police intelligence department. Ahmet İlhan Güler, Istanbul director of the intelligence, was suspended from duty following the murder over allegations of police negligence in the murder and Ali Fuat Yılmazer, a suspected Gülenist police chief, was assigned to the coveted post. Following Yılmazer's assignment, the Ergenekon investigation was launched, leading to a lengthy trial and detention process for defendants who were only released after a purge of Gülenists from key posts in the police and judiciary, and a law abolishing specially-authorized courts hearing the case.

Sabri Uzun, who was the head of the National Police Intelligence Department, had claimed his subordinates hid tip-offs in the lead up to Dink's murder. When questioned about the murder, Uzun claimed that Ali Fuat Yılmazer, his subordinate in the intelligence department, hid an intelligence report from him regarding the plot to kill Dink. Yılmazer was already imprisoned for nine months as part of another case involving alleged crimes committed by Gülenist infiltrators in the police. He was re-arrested earlier this month on charges of illegal wiretapping thousands of people in a new inquiry into an alleged Gülenist infiltration of the police and judiciary.
RELATED TOPICS