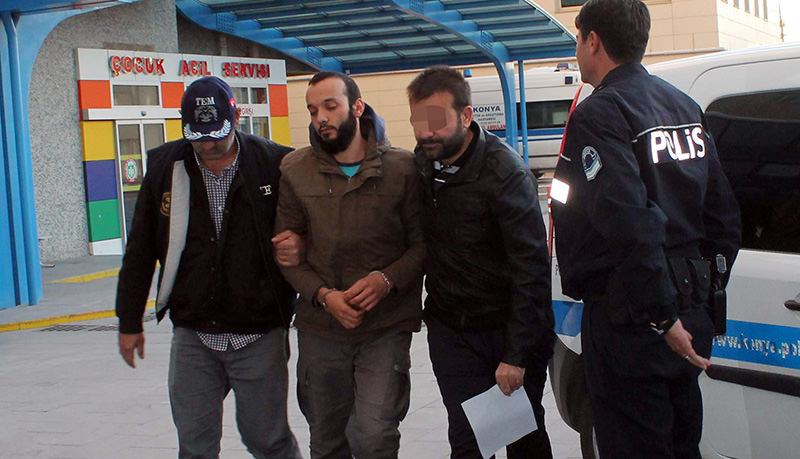 | IHA Photo
by Daily Sabah with Agencies Oct 27, 2015 12:00 am
Turkish police on Tuesday have detained at least 65 ISIS suspects in raids carried in Konya, Kocaeli and Istanbul provinces.

Security forces backed by police helicopters also carried out an operation in Istanbul's Sultanbeyli, Pendik and Ümraniye districts in which 21 suspects were detained. At least one suspect reportedly got injured while trying to run away from the police and was taken to the hospital. Another suspect fled and disappeared into nearby forestland.

According to reports, the suspects had connections with ISIS terrorists in southeastern Gaziantep, Kilis, Şanlıurfa, Diyarbakır and Bingöl provinces.
They have also visited conflict zones in Iraq and Syria for many times and were allegedly planning to carry out attacks.

A special investigation team has reportedly been deployed to find out about all of their connections. According to reports, the suspects, including a woman, were being questioned by anti-terrorism police.

On Monday, police stormed a house used by a suspected ISIS cell in the southeastern city of Diyarbakır, triggering a clash that left two police officers and seven terrorists dead while 12 terrorists were captured wounded.

On Saturday Turkish security forces detained five ISIS members in the border province of Kilis while they were attempting to cross into Syria to join the terrorist organization. Dozens of suspects with links to ISIS have been detained in the past month.

In May 2014, the counterterrorism unit of the Istanbul Police established "interview rooms" in airports and since has interrogated over 2,500 passengers suspected of having ties with terrorist organizations. Some 40 police teams, often dispatched to airports and bus terminals, have received special training in profiling, risk analysis, tracking and interrogation methods. It was reported that the police officers involved in these duties speak languages such as English, French, German and Arabic. A total of 23 questions prepared by experts are asked in interrogations. More than 550 passengers confessed to having intentions to join ISIS and were then deported. An official reportedly said 20,000 people have been banned from crossing the Syrian border in an effort to prevent foreign fighters from entering Syria from Turkey. In late June the official number for those deported by Turkish authorities was 1,350.

Turkey has been doing its part to identify and stop potential foreign fighters seeking to cross the border to Syria to join ISIS despite little cooperation in intelligence sharing with its Western allies. As part of Turkey's efforts, police have tightened security at transfer points such as airports, terminals, bus stations and rental car companies. The police have done so by employing a special risk analysis system and a team tasked with tracking suspicious foreigners who travel to Turkey for the first time and minors who have not made hotel reservations.

Regarding accusations that Turkey's border security is subpar, sources said Turkey shares a 1,300-kilometer border with Iraq and Syria and it is difficult to control. Nevertheless, sources say that the Turkish Land Forces Command patrols the border 24 hours a day with drones and reconnaissance aircraft. Furthermore, it has installed lights on a 270-kilometer stretch of the Syrian border, renewed a 1,210-kilometer patrol route, started digging 363 kilometers of trenches and building 90 kilometers of wire fences, 68 kilometers of embankments and seven kilometers of concrete walls. The sources say that more than 48,000 border crossings were intercepted, and 175,000 people have been caught since 2011.